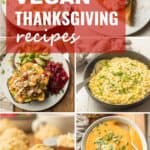 Since Thanksgiving is in fact a once a year meal, it's totally understandable that you may want to indulge in a thick and creamy bowl of soup. The good news is that all of these are made without dairy! Most are cashew-based, but if you're looking for a nut-free soup try the Creamy Mushroom & Wild Rice or the Potato Leek Soup.

I only have a few loaf recipes (so far), but they're all pretty killer. For something traditional(ish) try the (Almost) Classic Chickpea Meatloaf. The Italian meatloaf muffins are great if you're up for something fun and different!