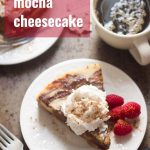 This dreamy vegan cheesecake is made with a spicy ginger snap crust filled with a creamy cashew base that's swirled with a decadent mix of chocolate and coffee.

I don't post a ton of dessert recipes on this blog. Maybe one every two weeks or so for most of the year. But around the holidays I like to bump up the frequency of my sweet recipes, for obvious reasons.

Most of the year I find that you guys come here for dinner recipes, so that's what I try and stick with. However, with the increased volume of sweets coming out of my kitchen lately, I've been keenly aware of the fact that there's another reason I avoid sweet recipes: because I know I'll go to town on the batter.

Isn't that the blessing and the curse of vegan baking? You trade minimal risk of food poisoning for double the risk that you won't be able to fit into your pants. In my defense, I kind of have to taste test the batter while I'm developing a recipe. I guess I don't need to turn it into my lunch for the day, but whatever.

I knew I was on to something with this one. I've shared a lot of vegan cheesecake recipes on this site (mango cheescake, caramel apple cheesecake, and raw cheesecake, to name a few), and they're all fantastic, but nothing comes close to the combination of chocolate and cheesecake and coffee if you ask me.

What I didn't expect was for the cheesecake itself to be a million times better than even the batter that I joyfully snacked on while making it. It was kind of mind-blowing.

The whole mocha cheesecake thing is a winning combination, but I think it was the ginger snap crust that took it over the top. Bonus: lots of ginger snap cookies you buy at the store happen to be accidentally vegan. I think this is my new solution in lieu of the classic graham cracker crust — graham crackers without honey can be a challenge to come by.

My husband and I shared a slice of this and I promptly stashed the rest of it in the freezer. I'd love to have polished off the whole thing, but that would be a bit much at this point. I plan to bust it out for Christmas and wow my whole family. 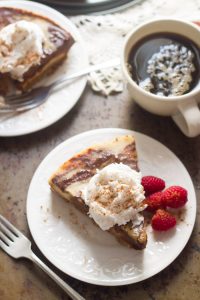 This dreamy vegan cheesecake is made with a spicy ginger snap crust filled with a creamy cashew base that's swirled with a decadent mix of chocolate and coffee.