It’s  Thusday, and already, it’s been a week. I don’t know how things are going for you guys, but life is a bit nuts in my world.

Maybe you figured that out already, if you tried to get onto the site earlier this week. Things were broken for a good part of the day Monday, and still not quite right on Tuesday or Wednesday, hence me putting off my Wednesday post until today. Apologies if you couldn’t get on the site to access a recipe you were looking for. I’m hoping things are up and running for good at this point.

Dealing with that has made me a little cranky. So…cheesecake. Yeah, I usually save desserts for the weekend, but my site broke, it’s cold and rainy, and I want cheesecake now.

In reality I fed this to my family last weekend, but let’s pretend I’m enjoying it with you today. Everyone loved it, and someone actually said something along the lines of “it tastes just as good as a regular cheesecake, but I don’t feel like awful after eating it.” I paraphrased some of that, but you get the gist. I could use some cheesecake. The last thing I need to feel like is awful. Vegan caramel apple cheesecake it is.

I learned a little something from this recipe: when it comes to vegan cheesecake, no-bake is the way to go. Isn’t that great?! All this time I thought no-bake was a cop-out and doomed to be inferior to baked cheesecake. That may be true of dairy cheesecake (or it may not, don’t ask me), but vegan cheesecake sans baking results in the richest, creamiest, cheesiest, feel-good cheesecake on the planet. Just a little bit of coconut oil and a few hours in the fridge results in a cheesecake with the perfect level of firmness.

Other things that are great about this cheesecake: (1) It has caramel. Super easy date caramel that you blend up in two minutes and spread over a graham cracker crust. (2) It has peanuts. Because we all know the caramel apples with peanuts are way better than the plain ones. (3) It has tender, simmered, cinnamoney apple chunks, which, judging by your reaction to this pudding, you guys dig as much as I do. 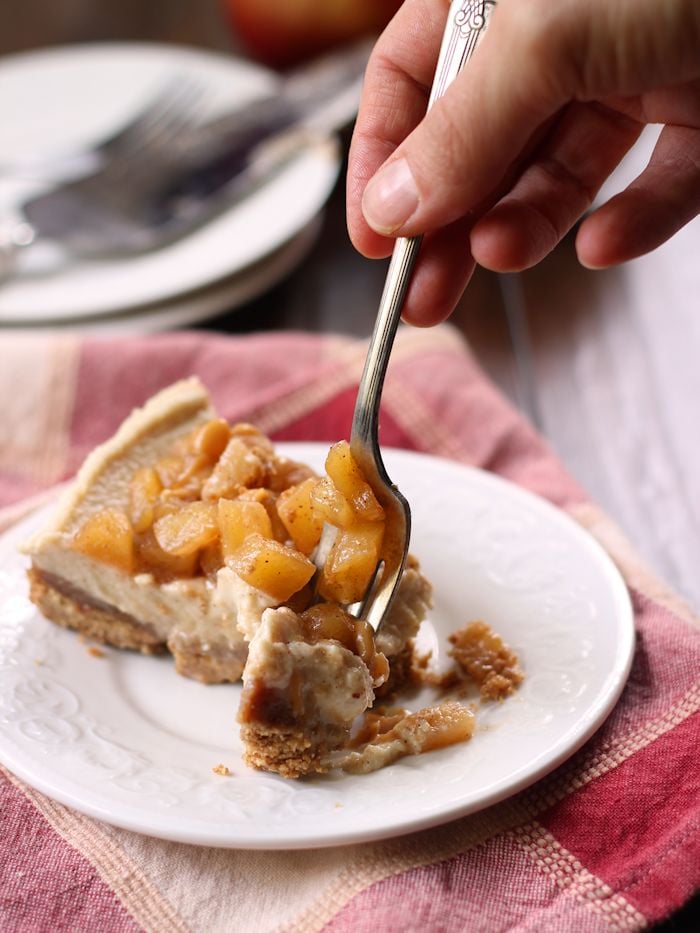 For the Date Caramel Peanut Layer

For the Cheesecake Layer

For the Apple Topping

For the Peanut Drizzle