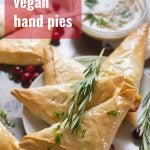 Layers of phyllo pastry are wrapped around a savory mix of lentils, mushrooms, walnuts and cranberries, and baked to golden, flaky perfection to make these scrumptious savory vegan hand pies.

Is there just something about hand-held food? All the goodness is bundled and squeezed into a little hand-held package. Pie is delicious. Hand pie is at least equally delicious (or maybe more, because there's more crust!), and it fits into the palm of your hand.

I've covered the heck out of savory vegan pies before. (If you haven't caught any of those recipes, find them here, here, and here.) So I decided it was time to switch things up a bit. It's time for hand pies.

I'll be honest: this time of year I have more recipe failures that any other. I think it's all the planning. Whereas most of the year I wing it, day in, day out, and just kind of post whatever moves me on a particular day, once the holidays arrive I start to actually put a calendar together. After all, I've got a whole menu to cover.

I posted a lasagna recipe a few weeks ago that could totally work as a Thanksgiving main dish, but I wanted to post another so we could all have options. After failure after failure at developing a complicated vegan roast, I gave up and decided to go with something simpler, and that everyone would love (because let's face it, if you're feeding omni grandparents they're not likely to get on board with a big hunk of baked seitan).

And so my savory vegan hand pie recipe was born. I actually adapted the flavors in here from my failed roast: the stuffing had walnuts, leeks, cranberries and the spices you'll find in here. But it was a traditional bread stuffing, and bread inside a pie didn't sound too appealing to me, so I switched it up for lentils and mushrooms. Super savory, super hearty, and perfect for pie.

Savory fillings, flaky phyllo, oh, and then you get to dip them in gravy. Perfect for Thanksgiving. 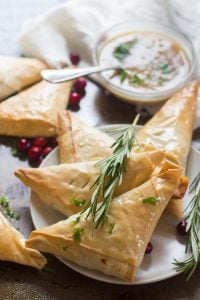 Layers of phyllo pastry are wrapped around a savory mix of lentils, mushrooms, walnuts and cranberries, and baked to golden, flaky perfection to make these scrumptious savory vegan hand pies.

The filling can be made a day ahead.