×
You are here: Home / Entrees / The Ultimate Vegan Shepherd's Pie 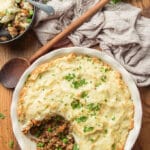 This hearty vegan shepherd's pie is made with a base of savory lentils simmered up with a touch of whiskey and topped off with a crust of creamy garlic mashed potatoes. The ultimate vegan comfort food main dish!

Have you ever had shepherd's pie? Or cottage pie, shepherd's pie's cousin? I was actually unfamiliar with the dish until just a few years ago, until one day my husband asked if he could make a meatless shepherd's pie with some leftover mashed potatoes we had.

I can be a little bit of a control freak in the kitchen, so instead of letting him go ahead and make one, I went and made it myself. I've tweaked and perfected the recipe since then, and I'm pretty confident at this point that I've finally created the best vegan shepherd's pie ever (or vegan cottage pie, if that's how you prefer to think of it!).

I'm not much of a drinker at all, and whiskey in particular I find pretty unpleasant in liquid form...but cook off that alcohol and what's left is a rich, woodsy flavor that's perfect for seasoning up veggie shepherd's pie like this one.

Okay, so you'll need more than just whiskey and lentils to make this one. Here's the full list!

How to Make Lentil Shepherd's Pie

The following is a detailed photo tutorial on how to make this dish. Scroll to the bottom of the post if you'd prefer to skip to the recipe!

Make the Crust and Assemble the Lentil Pie

Now pop your pie into the oven and bake it until the crust shows crispy browned spots!

Leftovers are best stored in the original dish that was used for baking, covered tightly with plastic. They'll keep in the fridge for about 4 days, or in the freezer (if sealed really well) for about 2 months.

Is this dish gluten-free?

Can this pie be made without alcohol?

Yup! Just omit the whiskey and skip steps 3 and 4 of the recipe. You can add the thyme when the vegetable broth goes in.

Can the filling be made with red or green lentils?

Green will absolutely work (I've done it!), although the simmer time in step 6 may be a bit longer. I don't recommend using red, as the texture wouldn't work well for this dish. 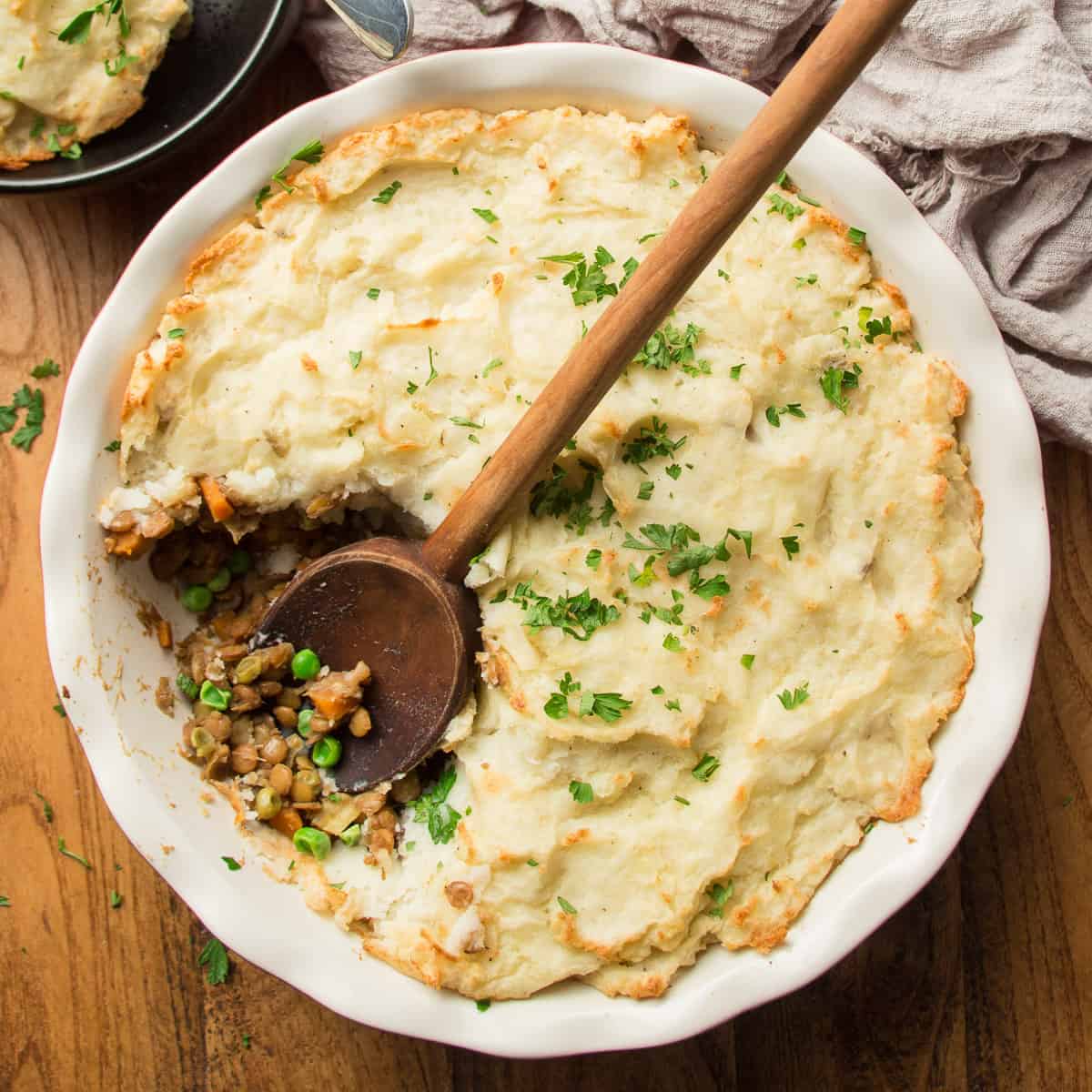 This hearty vegan shepherd's pie is made with a base of savory lentils simmered up with a touch of whiskey and topped off with a crust of creamy garlic mashed potatoes.
Course Entree
Cuisine American, British
Prep Time 20 minutes
Cook Time 1 hour
Total Time 1 hour 20 minutes
Servings 6
Calories 361 kcal
Author Alissa

For the Lentil Base

For the Garlic Mashed potatoes

Make the Lentil Base

This dish firms up as it sits, so it'll be a soft casserole straight from the oven, and a very sliceable pie after a few hours in the fridge.