×
You are here: Home / Entrees / Vegan Cheese and Onion Pie 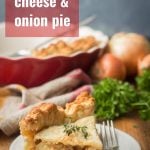 Cheesy (and totally dairy-free!) potato and onion filling is baked up between layers of flaky puff pastry crust to make this scrumptious vegan spin on classic cheese and onion pie! 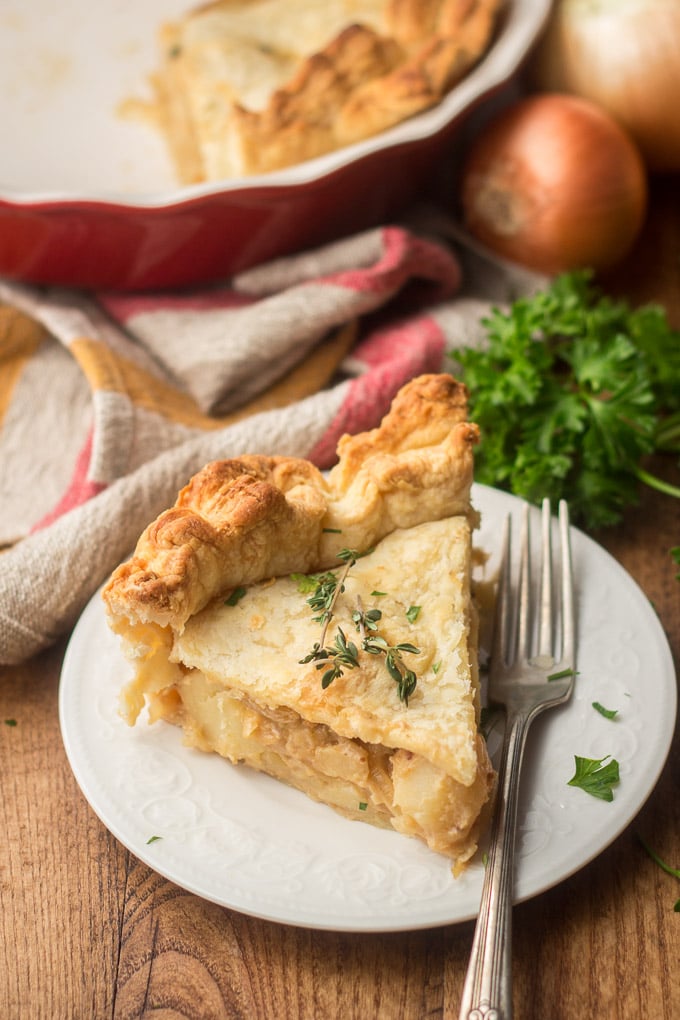 This was one of the most gratifying recipes I developed all year.

Once I found out that cheese and onion pie was a thing, I pretty much had to veganize it. And what better time than the holidays for something so rich and decadent?

But my hopes weren't that high. I realized on the morning that I first attempted the recipe that it could be a huge pain to get this one right. There are so many ways to go about something like this! And many of them could turn out to be pretty bad.

So as I pondered the bowl of soaking cashews and the block of silken tofu sitting on my counter, I decided to scrap all my complicated plans and go with something super simple for the cheesy element of this pie: coconut milk. Best decision ever!

What is Cheese & Onion Pie? 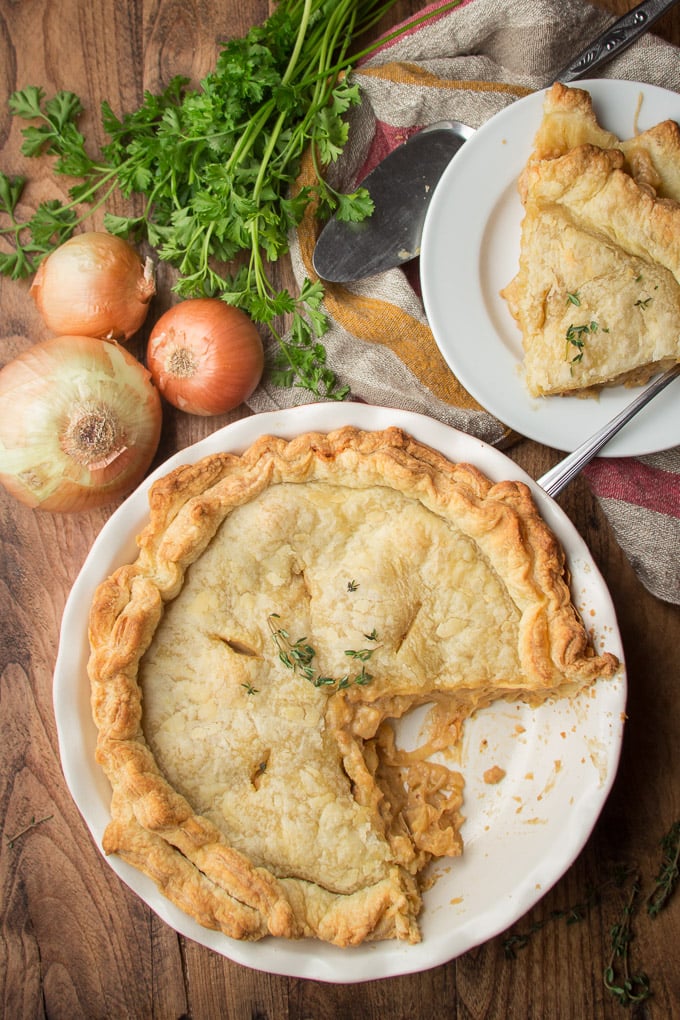 Cheese and onion pie is an English creation. I've looked at a lot of recipes for this dish, and frankly, besides the fact that they're all pies filled with cheese and onions, they don't have much in common. Some recipes use a lot of onion, some just a little. Some involve browning the onion, while some boil it. Cheddar seems to be the most popular type of cheese, but some recipes use other varieties. Some have eggs. Some have potatoes. Some have other stuff. 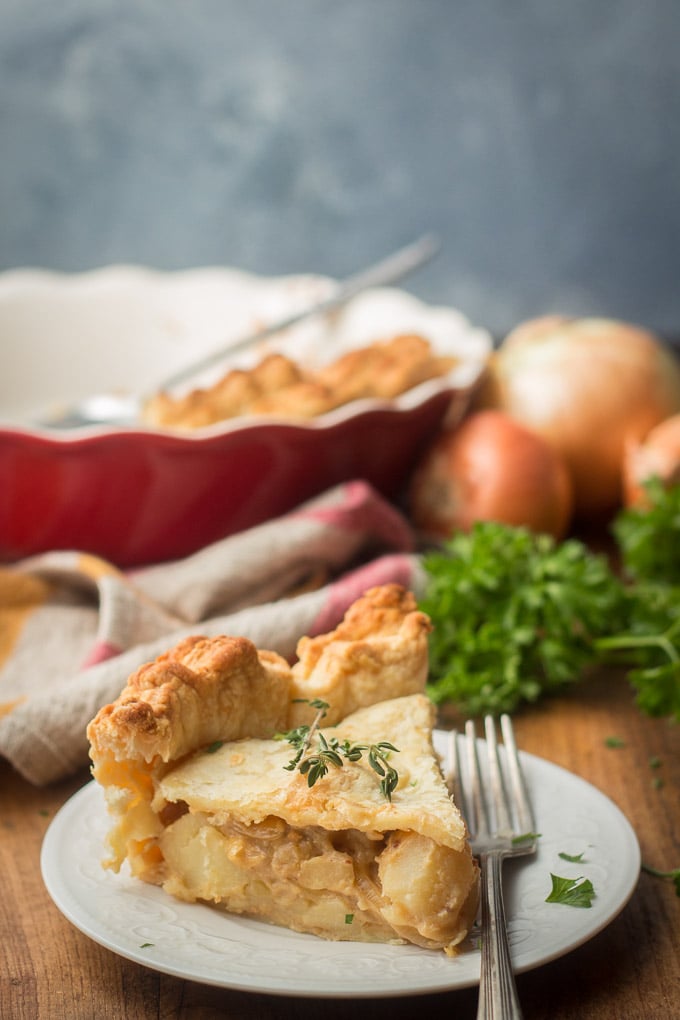 Our filling has a potato in it. The potato helps add some bulk to the filling, and potatoes are delicious, so I went with it. Just peel, dice and boil it until it's fork tender.

While the potato cooks, you can start the sauce by cooking some thinly sliced onions in olive oil. Keep them over low heat and let them slowly cook for 15 to 20 minutes, until they soften up and just begin to brown.

Next you'll add some garlic. Garlic doesn't seem to be a typical ingredient in cheese and onion pie, but since our version is vegan we're seasoning it with what's available. Just cook the garlic for about a minute, until it becomes very fragrant. 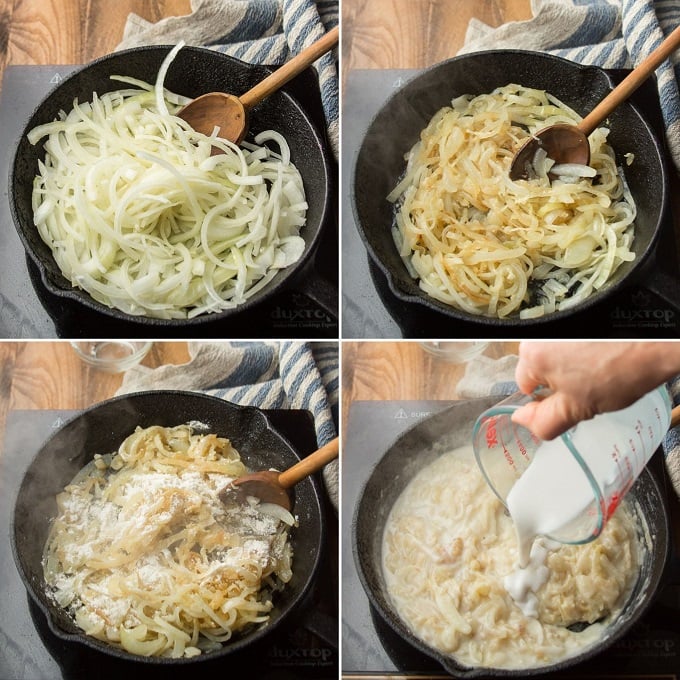 Now it's time to season the sauce. Add some nutritional yeast, mustard, and hot sauce. You'll also be adding some white miso paste, which is pretty thick. I recommend spooning some of the sauce into a separate cup, then whisking in the miso. When the mixture is smooth, add it to your sauce.

Let the sauce simmer for about 3 or 4 minutes — that's about all it needs to thicken up. Remove the sauce from the burner and fold in the potato. Now just add some salt and pepper to taste, and your filling is done! 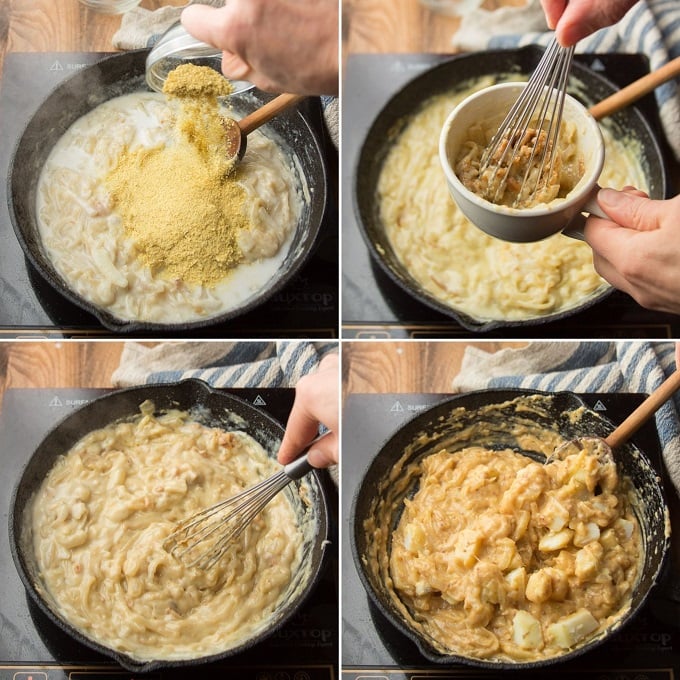 I went with not so traditional puff pastry for the crust, simply because puff pastry is absolutely delicious and lots of brands are accidentally vegan.

Grab a pie dish (I recommend a deep one), lightly oil the surface, and roll a sheet of your puff pastry so it's large enough to cover the bottom and sides. Drape it in the dish and poke a few holes in the bottom.

Transfer the filling into the pie dish, then roll out a second piece of puff pastry for the top of your pie. Arrange it over the filling and trim any excess dough from both sheets using a knife or kitchen shears. Pinch them together tightly to create a seal.

Cut a few slits in the top crust and brush it with olive oil. Bake the pie until the top crust is flaky and browning around the edges. 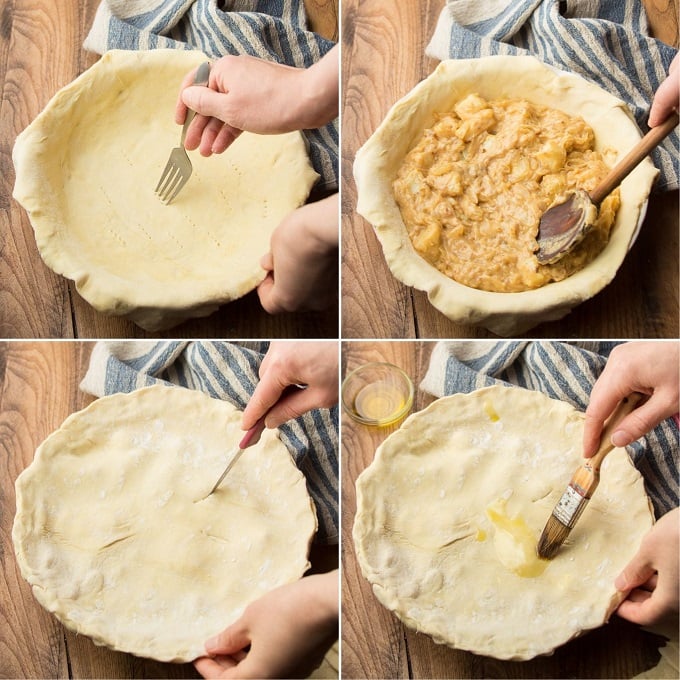 You can serve your pie hot, in which case it will be a bit sloppy, or let it cool and firm up. 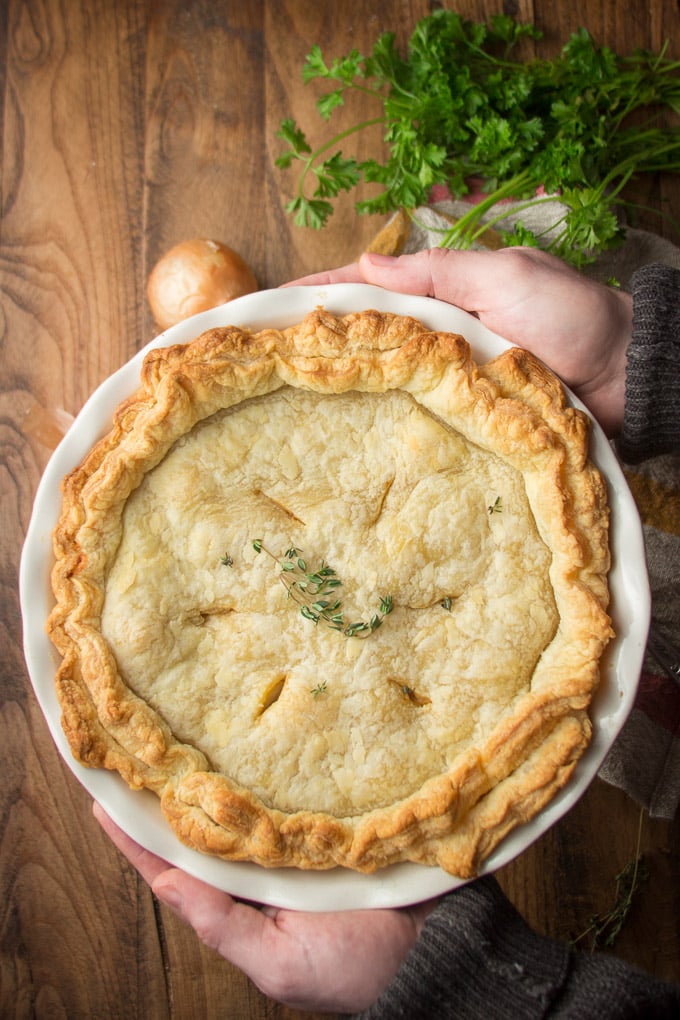 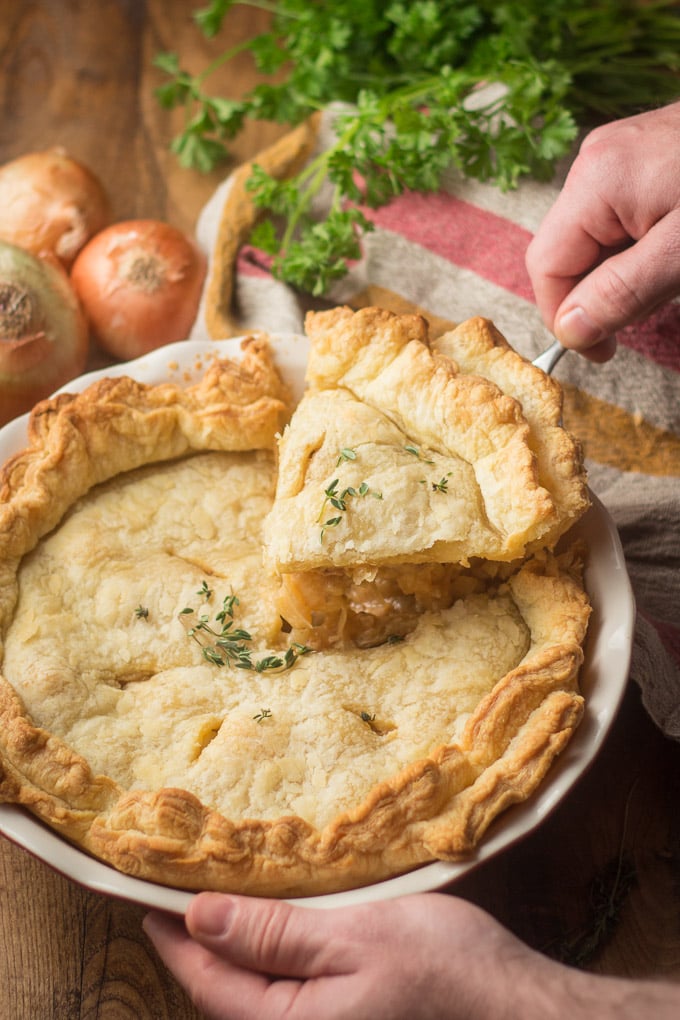 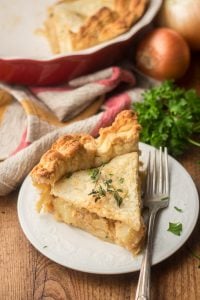 Cheesy (and totally dairy-free!) potato and onion filling is baked up between layers of flaky puff pastry crust to make this scrumptious vegan spin on classic cheese and onion pie!

If you don't have a deep dish pie plate, a small casserole dish (about 1.7 quarts) can be used.