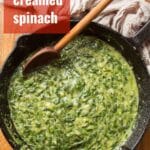 You'd never guess this luscious creamed spinach was totally vegan! Loaded with flavor, easy to make, and totally dairy-free, it makes a great side for everything from holidays to weeknight dinners.

Creamed spinach was one of my guilty pleasures growing up. It was a favorite side dish from a chain restaurant that shall remain nameless. Whenever my family ate there I had to construct a meal out of sides, but I didn't mind, as long as I could get some creamed spinach!

It just recently occurred to me that creamed spinach would be super easy to veganize. Well it was, and it was just as delicious as I remember!

How to Make Vegan Creamed Spinach​​​​​​​

The following is a detailed photo tutorial. Scroll to the bottom of this page if you'd prefer to skip right to the recipe.

Season your vegan creamed spinach with some salt and pepper. I also like to top mine with scallions or chives. A sprinkle of vegan Parmesan would be nice as well.

Serve and watch it disappear! 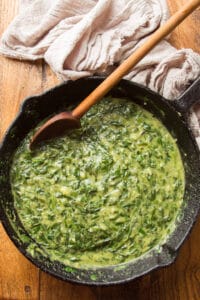 You'd never guess this luscious creamed spinach was totally vegan! Loaded with flavor, easy to make, and totally free from dairy, it makes a great side for everything from holidays to weeknight dinners.