This healthy and hearty red bean kale soup is packed with juicy tomatoes, savory rosemary, and (optionally) seasoned up with a touch of hot sauce.

I've been waiting a long time to share this recipe with you guys. In fact, I first made this soup shortly after starting this blog, but at the time, every post was such an endeavor that I just didn't have the energy to photograph it or record the recipe. Those early posts of mine often involved a half day's work or so and a completely trashed kitchen. Imagine the dismay I felt when a recipe didn't turn out as planned. Such sadness. And then I could have kicked myself when this recipe turned out as good as it did, and I didn't plan ahead for blogging it. That's okay though. I've got more to share it with now.

My delay in making this soup again and sharing it with you is due to the fact that soon after making my first batch, spring arrived and the air began to warm up, and this just isn't a soup that screams "summertime fun." It's all about autumn coziness.

I visited an acupuncturist just before making the initial batch. I felt rather run down and she asked what I was eating. Informed her that diet couldn't possibly be the cause of my fatigue, as I was in the habit of stuffing my face with salad and raw veggies all day long. While that may be okay to do in the warmer months, she informed me, not so in the cooler months, especially for the likes of me, with my deficient spleen chi. "Eat some kale, some beans, cooked...get some iron." Kale, beans, yes...I had to go home and eat just those things. So I made this soup, and you know what? I felt better! Was it because my body was thanking me for these easily digestible and absorbable nutrition packed veggies? Maybe. Was it because the soup was so damn delicious? Maybe. Could also be a little of both. Whatever the case, and whatever the state of your chi, I highly suggest making and eating this one right away. You will feel good.

One possible variation to this recipe would be the addition of some veggie sausage. The first time I made it I bought a pack of links and browned them in a skillet before adding them to the soup. This adds some protein and weight to the soup if you're looking for that, but either way it will be delicious and satisfying.

This post originally published on Connoisseurus Veg on October 28, 2013. 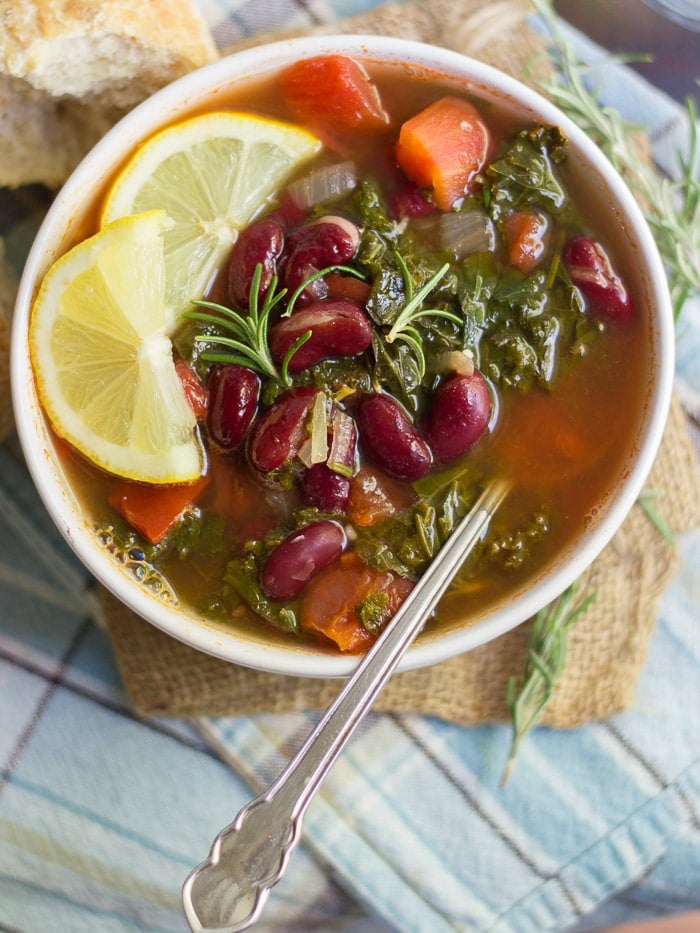