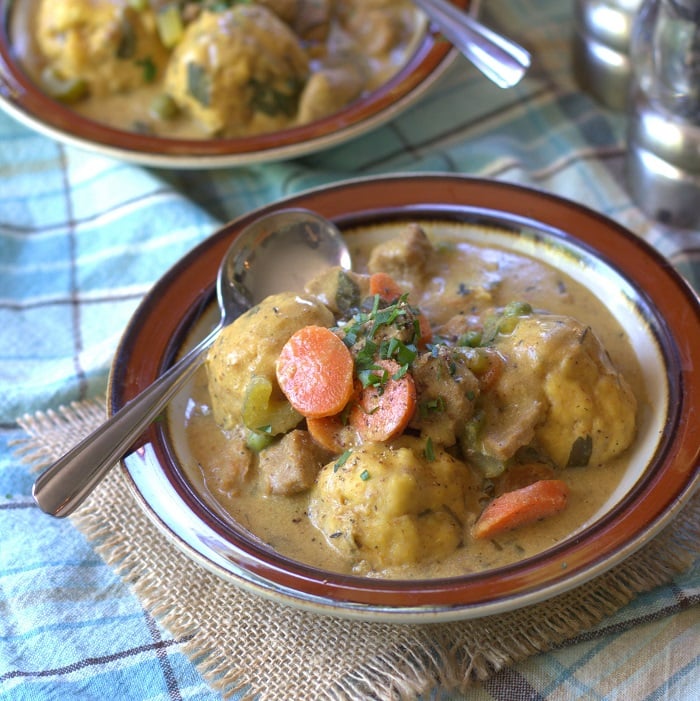 Well now. Here we are, post Memorial Day, temperatures steadily climbing, and I’m posting a recipe for comfort food. Hearty, heavy, veganized chicken and dumplings no less. Serious comfort food. You know what though? It was really freaking good comfort food. No regrets.

I didn’t really plan to post something like this in late May, but when I received a copy of Mastering the Art of Vegan Cooking

by Annie and Dan Shannon for review, along with an invitation to choose from a few recipes for posting, this vegan chicken and dumplings recipe was the one that grabbed me. I haven’t done nearly enough cookbook cooking since I began blogging. One of the nice things about cracking open a new cookbook and picking a recipe is that it’s often one I never would’ve come up with on my own, but no less delicious. I also tend to learn a thing or two when I branch out and start cooking according to someone else’s instructions.  In this case I was dubious, for example, about throwing a whole cup of nutritional yeast into my stew, or using whole wheat flour as a thickener, but both worked out beautifully, and this was a delicious and indeed comforting dinner. 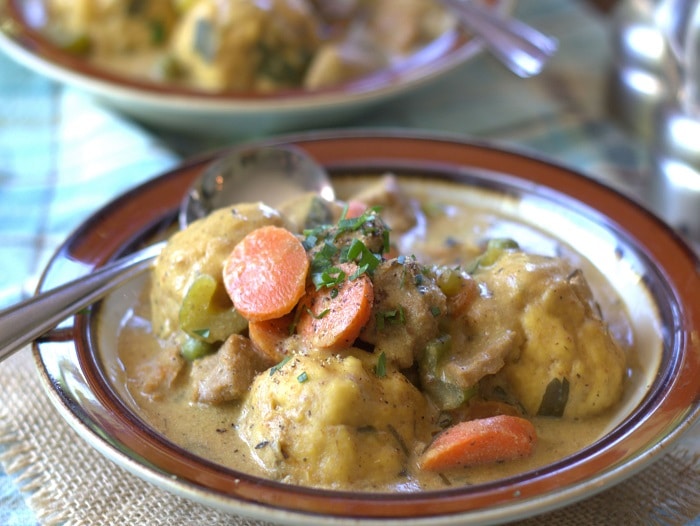 The one adjustment I did make was to substitute seitan for the vegan chicken called for in the recipe. Feel free to go with either ingredient choice if you make this. I don’t use commercial meat substitutes a whole lot in my kitchen or on this blog, but I do recognize that good quality meat substitutes have a place, particularly for those new to a vegetarian or vegan diet. The recipe, as well as many others in the book, includes brand recommendations where meat substitutes are called for, which is pretty helpful because they’re not always interchangeable.

On that note, I’ll say that this book would be perfect for veg newbies. The recipes are versatile, relatively easy, and have a wide appeal. The book also offers plenty of practical tips on stuff like how to stock your vegan pantry and how to food shop as a vegan. There’s an entire chapter devoted to recipes for repurposing leftovers, which is a topic pretty near and dear to my heart. It even gives you a cost estimate per serving for each dish, which is great because I’ve found cost to be one of the biggest concerns for those wishing to cut animal products from their diet.

The chicklins & dumplins stew weighs in at a mere $1.99 per serving, and is incredibly tasty. My husband and I ate this on a chillier day when we were both feeling a bit cranky and beat up after a rough week. Hang on to this one – I’m sure you’ll find room for a little comfort dining in your spring. 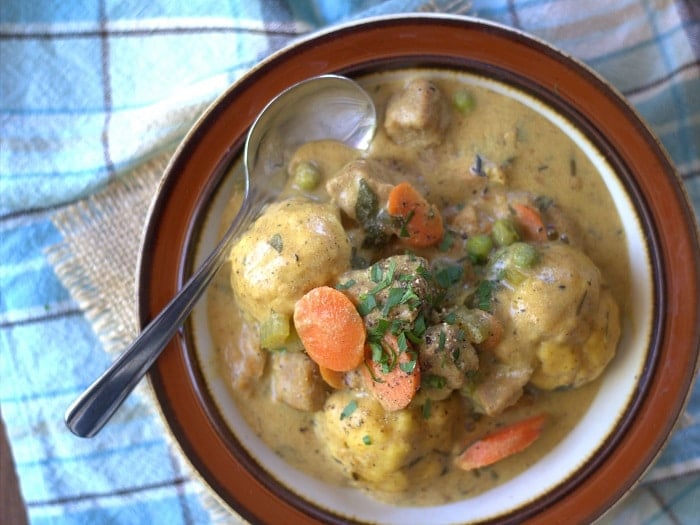