Fudgy chocolate chip-studded vegan brownies are topped with a layer of luscious cashew cheesecake to make this decadent and totally vegan fall dessert.

I can't believe it's the end of September already and I'm just getting to posting my first pumpkin recipe of the season. But then I can, because it's been freakishly hot where I live and for the most part, pumpkin anything feels wrong when it's a thousand degrees out.

On the other hand, I am excited about pumpkin and all things fall that are forthcoming (in case I haven't mentioned that enough on this site), and tomorrow it's supposed to start feeling like fall, so in a way, I got a head start by posting this today.

I have Sam from over at It Doesn't Taste Like Chicken to thank, at least in part for that. Sam and I decided to challenge each other to create a recipe using three ingredients: pumpkin, cashews and ginger. We decided on all of this weeks ago when I would've expected it to feel like fall by now. It doesn't, but like I said, it got me ahead of the game!

If you haven't checked out Sam's blog (and, actually, I know for a fact that a bunch of you have and are big fans), please go on over and do so! I know you guys will love her and her vegan creations. Like me, she's focused on creating food that's absolutely delicious and will make anyone love eating vegan. If you like my recipes I can guarantee that you'll enjoy hers too! Head on over and definitely check out the Melty Stretchy Gooey Vegan Mozzarella Cheese (<-- OMG, yes!) Ultimate Vegan Chocolate Cake, and 6 Ingredient Pulled Jackfruit.

Oh yeah, I'm pretty psyched that Sam's got a cookbook coming out next month! It's called Fuss-Free Vegan and it's all about easy vegan comfort food dishes, which we all love around here. You can read a bit more about it and even order a copy here!

I found out earlier this week that Sam's recipe for our challenge is Pumpkin Cashew Curry, and now I'm totally dreaming about curling up with a bowl of it in front of a cozy fire. I love savory, spicy pumpkin dishes so I'm really excited to try this. I'm also really glad she went with something savory, because paired up with these brownies you've got dinner and dessert covered!

And as for these brownies, well I got the from a tip a friend gave me a few years ago: buy a box of brownie mix, add a can of pumpkin (nothing else), and bake as directed for easy vegan brownies.

My pumpkin cheesecake brownies aren't quite that simple, but they're worth the effort. Pumpkin in the brownie base, pumpkin in the cheesecake, and chocolate chips throughout. It's all the best things about pumpkin pie and brownies and cheesecake in vegan form, and it's delicious.

Oh, and a scoop of vegan ice cream on top, if you really want the ultimate vegan dessert. I had a hard time keeping my hands off of them! 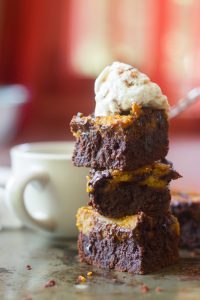 Fudgy chocolate chip-studded vegan brownies are topped with a layer of luscious cashew cheesecake to make this decadent and totally vegan fall dessert.

For the Brownie Layer

For the Pumpkin Cheesecake Layer