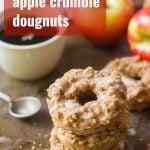 These vegan apple crumble doughnuts are made with a spiced batter studded with juicy apple chunks, and covered with a sweet cinnamon crumble topping.

So, what's everyone's favorite kind of doughnut? Back in my doughnut eating days I went for anything covered in chocolate, preferably Boston creme, but other chocolate frosted varieties worked too, as did chocolate stuffed. But I know that there's a lot more variation in other people's doughnut taste and I think most are partial towards jelly stuffed. Right?

My husband and I had a conversation about doughnut favorites recently, and he works in an office where boxes of doughnuts shot up from time to time. He's the one that tipped me off to the fact that most people favor jelly doughnuts. Apparently they disappear the quickest. That totally surprised me!

I'm not so sure I can do a vegan jelly doughnut. It's a challenge, and I'll be honest, just not something I'm into at all. But when I was talking with my husband he also mentioned apple-stuffed doughnuts — those were one of his favorites. Those apple stuffed doughnuts are kind of like the jelly ones and I guess they're popular too.

No, I'm not going to make one of those, but apple's a good idea.

Now that we've gotten what these doughnuts are not out of the way, let's talk about what they are. These baked doughnuts are made with a batter of whole wheat pastry flour with lots of spices. Applesauce makes keeps them nice and moist. I also included some apple chunks, because how could I not when they're sweet and juicy and in season.

Apple in the doughnut, applesauce in the batter, and crumble topping...now we're talking.

These doughnuts are also baked, because I'm just not prepared to start frying up doughnuts, for a number of reasons. But for baked doughnuts, they're pretty darn decadent. They're moist, sweet, delicious, and every bit as satisfying as a big old fried jelly or apple-stuffed doughnut. These little guys are kind of like little apple coffee cakes, in doughnut form, and perfect for enjoying alongside a nice hot tea or coffee in the fall. 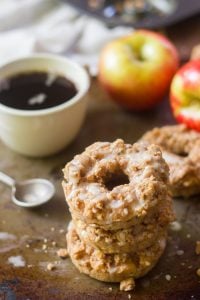 These vegan apple crumble doughnuts are made with a spiced batter studded with juicy apple chunks, and covered with a sweet cinnamon crumble topping.

For the Crumble Topping