My mom's potato soup was one of my favorite things when I was growing up! I went vegetarian pretty young and it was one of those meals that could be pretty easily tweaked to suit my diet: just replace the chicken broth with vegetable broth.

I recently got a craving for that soup and decided it was time to veganize it. Fortunately, that pretty easily done too, with just a few simple swaps!

This dairy-free soup is made with pretty simple ingredients that you might already have in your kitchen.

Vegan butter. This replaces the dairy butter in mom's version. Look for brands like Earth Balance and Miyoko's.

Veggies. Potato soup isn't just about potatoes. This version is made with onions, celery and carrots.

Garlic. For a flavor punch.

Flour. This helps thicken up the soup.

Non-dairy milk. We're using this instead of dairy milk, for a rich and creamy base. Just about anything unflavored and unsweetened will do. I used Silk cashew milk for this batch.

Vegetable broth. This adds some savory flavor to our base.

White wine vinegar. For just a touch of tartness to balance out the flavors. Trust me, this makes the soup!

How to Make Vegan Potato Soup

Start by melting some vegan butter in a large pot. Now add your veggies and cook them up for about 10 minutes, until they begin to soften. Add the garlic and let it cook for just another minute, until very fragrant.

Now sprinkle in the flour, just a bit at a time. Stir the veggies to coat them with the flour, and continue cooking and stirring everything for about a minute.

Now you can add your broth. Pour in just a bit at a time, whisking frequently to break up any lumps that form from the flour. Add the milk, herbs, and potatoes. Bring everything up to a simmer and let it cook until the potatoes and veggies are tender, about 30 minutes.

Grab a bowl and dig in! 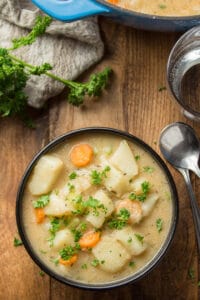