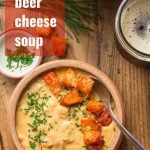 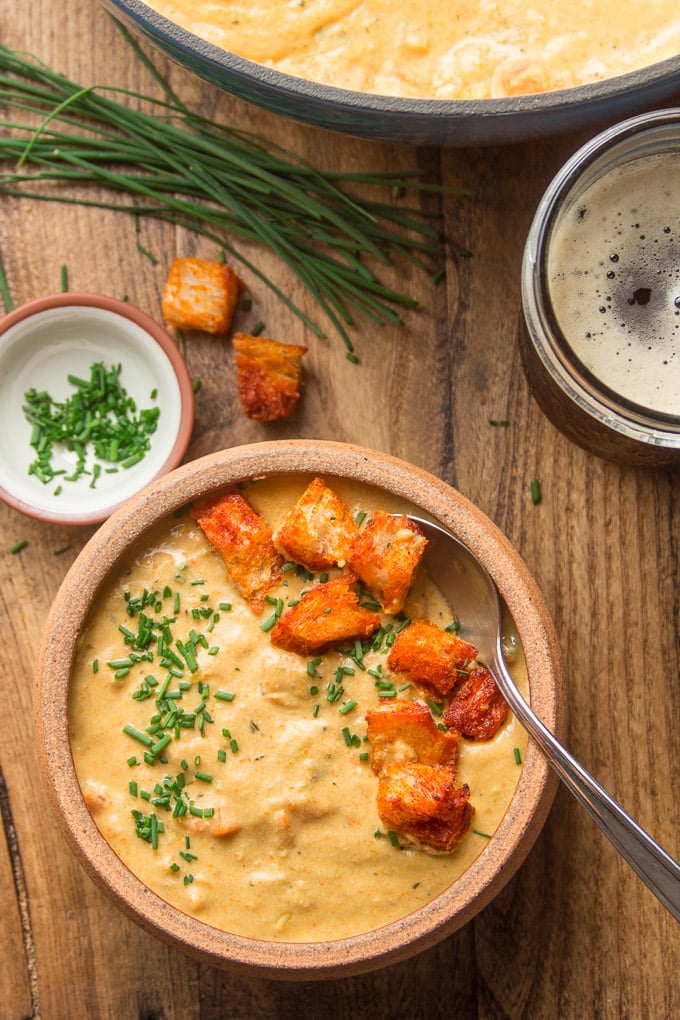 Ever since I first learned that there is such a thing as soup made of beer and cheese, I've wanted to veganize it.

I psyched myself out for a while and put it off, and then October rolled around. It seemed like the right time to go for it!

I think traditional cheddar beer soup is an Oktoberfest thing, but I know very little about beer, so I could be totally wrong about that. In any event, couldn't we all go for a big bowl of cheesy vegan soupy goodness during the fall anyway? So the whether or not this is traditional is a moot point: it's a good idea!

What is Beer Cheese Soup? 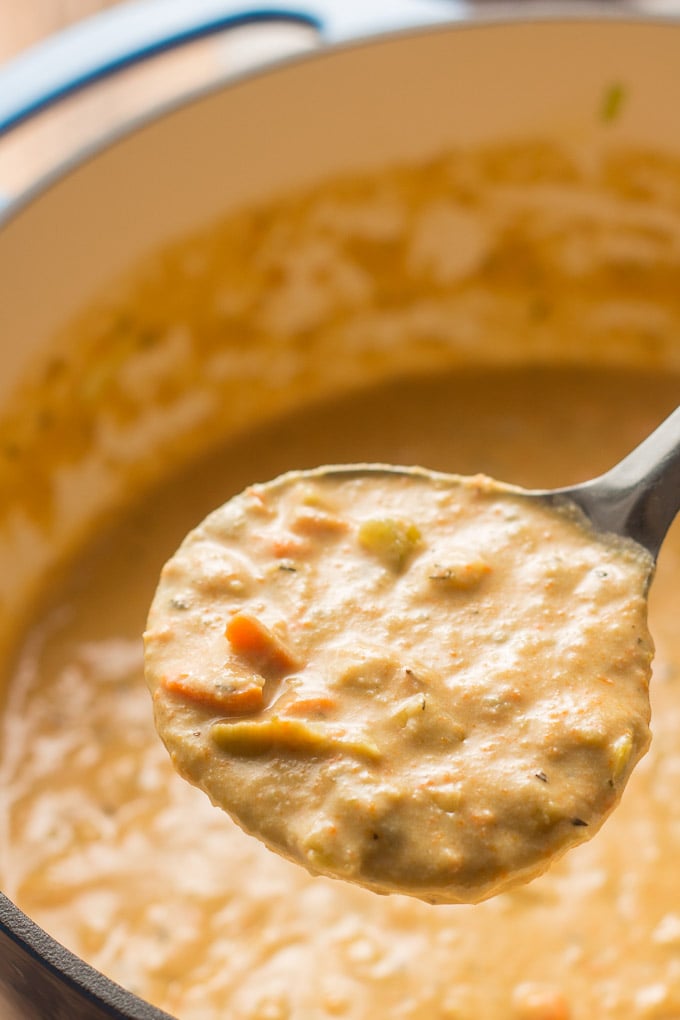 Traditional beer cheese soup is just what it sounds like! Thick, creamy soup made with a base of beer that has cheese (usually cheddar) melted in it. It's usually also got some robust seasonings like mustard, hot sauce, and Worcestershire sauce in there, and some versions include veggies.

How to Veganize Beer Cheese Soup 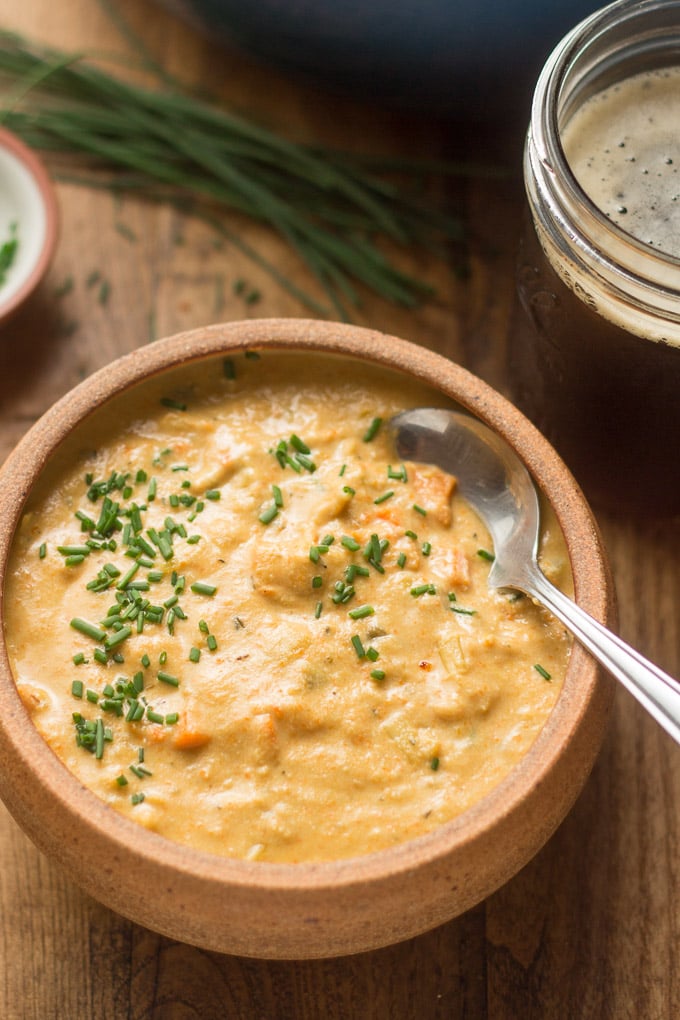 I included two ingredients in my creamy base for this soup: cashews and pureed veggies!

If you read this blog regularly, you probably know of my love for cashews and that they blend up super creamy. (You can even make dairy-free cream out of cashews!). So that part was easy.

But the veggies part was kind of inspired. Like I mentioned above, some versions of beer cheese soup include veggies as well as beer and cheese. I decided to include them in mine, but in double the amount you'd normally find in beer cheese soup. Half the veggies just serve the normal purpose of veggies in soup, adding texture and flavor and all that, but the other half gets blended up to give our soup even more of a creamy, savory base!

Next, add some flour. This is going to help thicken the soup. Stir everything well so that the flour forms a coating on the veggies and cook everything together for two minutes or so.

Now it's time to add the beer! Pour the whole bottle into the pot, stir it well, and bring it up to a simmer. The liquid should get pretty thick rather quickly, so make sure you're stirring it often and scraping the bottom of the pot with a spoon. Let the beer cook for about 5 minutes, until it reduces by about half, and then add half of the broth (we'll get to the other half in a minute). 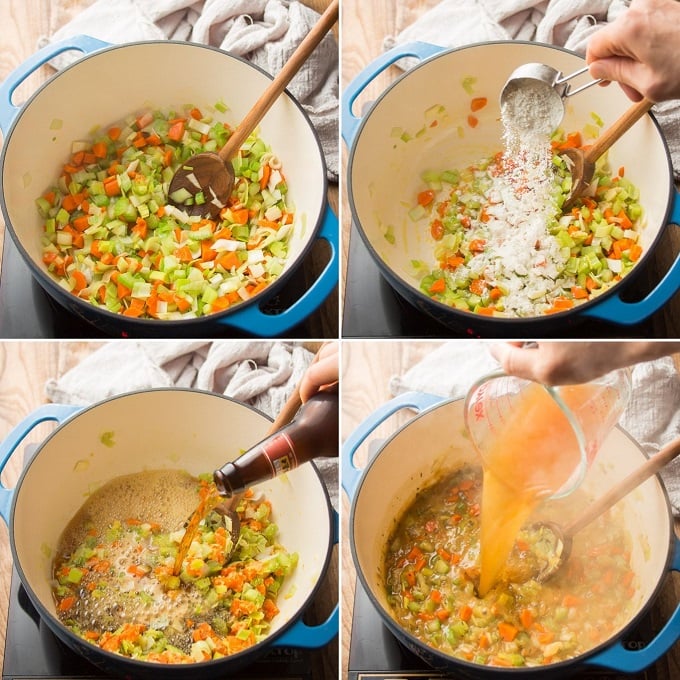 Bring the broth up to a simmer and let everything cook for another 10 minutes or so, until the veggies are tender.

Now it's time to make our cashew mixture! Place the cashews into your food processor bowl with about ¼ cup of broth and blend them to a smooth paste. Stop the food processor and scrape down the sides of the bowl every now and then, and add more broth as needed to smooth the mixture out.

Once you've got a relatively smooth paste, ladle some of those veggies out the pot and into the food processor. Blend them up with your cashew paste. 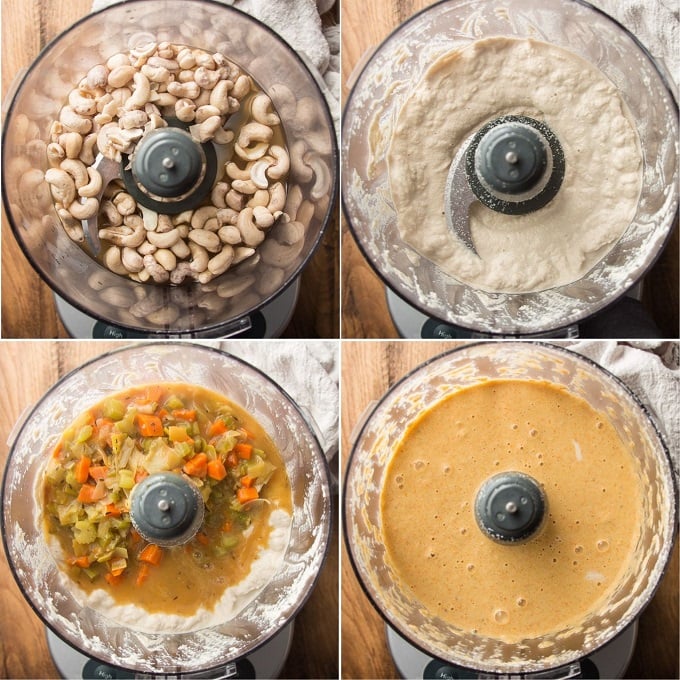 Once the mixture is pretty smooth, add it to the pot. If you still have any broth left, add that as well. Mix everything up and stir in some seasonings: nooch, mustard, hot sauce and vegan Worcestershire sauce. Heat the soup back up, and if you'd like, thin it with some additional broth or water.

I like to top mine with some smoky homemade croutons (instructions for making them are included in the recipe below). 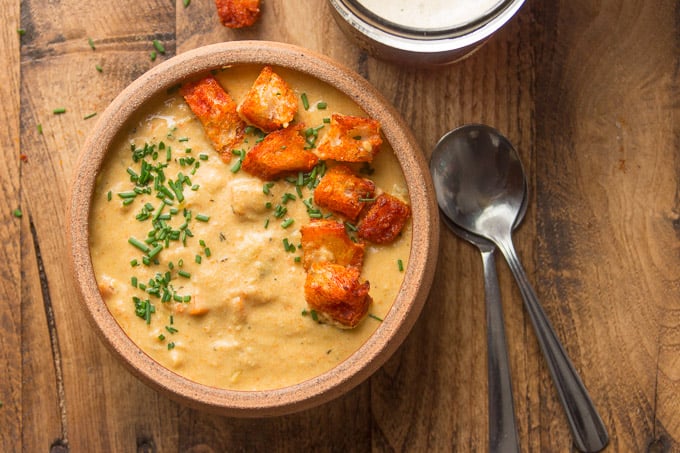 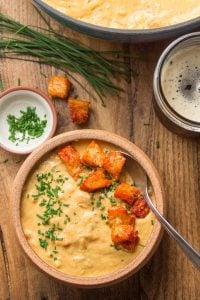 For the Beer Cheese Soup

For the Smoky Croutons

This soup is great topped with tempeh bacon. Just stir together, 2 tablespoons soy sauce, 1 tablespoon maple syrup, 1 tablespoon apple cider vinegar, and1 teaspoon liquid smoke. Cut an 8 ounce package of tempeh into ½ inch cubes and marinate them in the soy sauce mixture for 30 minutes. Heat 1 tablespoon of olive oil in a medium skillet. Add the tempeh and cook for about 10 minutes, until browned and crisp.