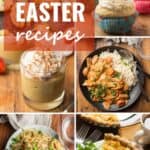 Easter is coming up! Have you planned your menu yet? This collection of over 50 vegan Easter recipes includes every course, from brunch to dinner to dessert.

Here comes Easter! A time to celebrate spring, bust out the pastels, and most of all, feast!

But alas, planning a vegan Easter menu can be a bit challenging when you're dealing with a holiday that revolves around ham and colored eggs. That's why I'm here to help. I've put together this massive collection of vegan Easter recipes.

I've included a little bit of everything, so whether you're celebrating with brunch, dinner, or just an Easter basket full of sweets, you've got options!

A great meal starts with great appetizers! These vegan snacks will keep everyone happy while they await the big meal.

Holidays call for extra special, extra hearty main dishes. Here are a few of my favorites! For something traditional-ish, go for vegan meatloaf or shepherd's pie. If you're feeling adventurous, try the tofu steaks or mushroom paprikash.

Cook up a couple of these delicious dishes to round out your vegan Easter dinner!

Some families (like mine!) prefer to celebrate Easter with brunch. I like to serve a mix of sweet and savory recipes from the list below. Oh, and if this list isn't enough for you, I put together an entire post on vegan brunch recipes (83 of them!).

Whether you're celebrating with brunch or dinner, a delicious vegan dessert to wrap up the meal is essential!