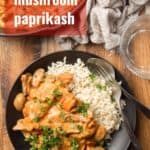 This creamy vegan paprikash substitutes mushrooms for meat! Made with peppers and onions in a smoky cashew-based paprika sauce, this will be your new favorite comfort food meal.

Well, I already learned that I'm a big fan of vegan goulash, despite never having tasted non-vegan goulash in my life. Since starting this blog I've made vegan versions of traditional and American goulash.

I just learned that goulash has a cousin: paprikash. Paprikash is kind of like goulash, but with a creamy sauce. Of course I had to make a vegan version happen asap!

How to Make Mushroom Paprikash

The following is a detailed photo tutorial on how to make this dish. Scroll down if you'd like to skip straight to the recipe!

First, make sure you've soaked your cashews in water for a few hours before getting started. If you forget, try boiling them for 15 minutes, but know that they might not blend up as smooth.

It's ready! Serve your paprikash over rice and with some sauerkraut, if you like. Dig on in! 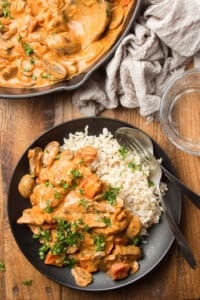 This creamy vegan paprikash substitutes mushrooms for meat! Made with peppers and onions in a smoky cashew-based paprika sauce, this will be your new favorite comfort food meal.

Nutrition information does not include rice or sauerkraut.

*Feel free to substitute a bit of smoked or hot paprika for extra flavor.