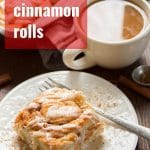 These delicious vegan cinnamon rolls are bursting with ooey-gooey spiced filling and smothered in sweet vanilla glaze. Perfect with a cup of tea! The best part? The buns can be assembled a day in advance and then popped in the oven just before serving.

Anyone doing a lot of holiday shopping online this year? ME TOO! It's all good though. I certainly don't miss the crowds.

But maybe do I miss the smells wafting from Cinnabon as I would walk through the mall. Even if I haven't actually bought a Cinnabon since 1995.

Well, good news: these vegan cinnamon rolls make your house smell just like Cinnabon. But better! You can actually eat these buns, because they're vegan. And they're more delicious than anything I ever got at a mall, if I do say so myself.

Also, this vegan cinnamon bun recipe has an overnight option, so you can assemble them on Christmas eve and then bake them Christmas morning and share your Cinnabon experience with the whole family. Most malls aren't even open on Christmas.

How to Make Vegan Cinnamon Rolls

The following is a detailed photo tutorial on how to make vegan cinnamon rolls. Scroll down to the bottom of the page if you'd like to skip right to the recipe!

And then comes the (actually) fun part.

Tip: Start by slicing your log in half, then slice each half into thirds (so now you've got six pieces), then slice each of those pieces into thirds. This will ensure you get nice evenly sized pieces, and the right number of pieces. I actually goofed when I made this batch and ended up with 20. Oops!

Bake and Finish the Rolls 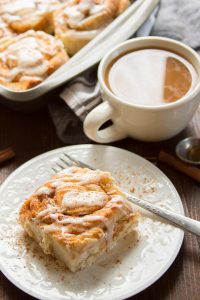 These tender vegan cinnamon rolls are bursting with ooey-gooey spiced filling and smothered in sweet maple glaze. Perfect with a cup of tea! The best part? The buns can be assembled a day in advance and then popped in the oven just before serving.