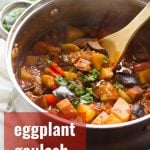 Potatoes, bell peppers and tender-melt-in-your-mouth chunks of eggplant are simmered up in a smoky paprika sauce to make this hearty and comforting vegan goulash.

The other day I was looking at my blog stats and I noticed that someone ended up here after googling "vegan goulash." The funny thing is, I didn't even have a vegan goulash recipe at the time. They landed on my mushroom beef stew recipe. I guess that's close enough to goulash that if you scroll past enough search results, it'll eventually show up.

Anyhow, I took it as a sign that I needed to dabble in some goulash, a dish I knew very little of. I took to the old Google myself and initially found a bunch of recipes for American goulash, which sounded a bit like hamburger pasta and didn't appeal to me a whole lot. Hungarian goulash, on the other hand, seemed more interesting - something like beef stew, but with a heavy hit of paprika. I opted to veganize the Hungarian version, and that's how we ended up here.

By the way, let me know if I should take a crack at American goulash! If I'm missing something and there's more to it than meaty pasta, or if you just happened to love meaty pasta as a kid and want a vegan spin on the dish, I'd be happy to help out!

Back to the dish currently at hand. Since it is quite a bit like beef stew, and since I've done the whole mushroom beef stew thing, I decided to go into some uncharted territory: eggplant! The idea of some tender eggplant chunks simmered in peppery stew sounded pretty fantastic, and it totally was. The potatoes give this meal a stick-to-your ribs quality that's perfect a winter dinner. Best of all, everything cooks up in one pot, and couldn't be easier to throw together. 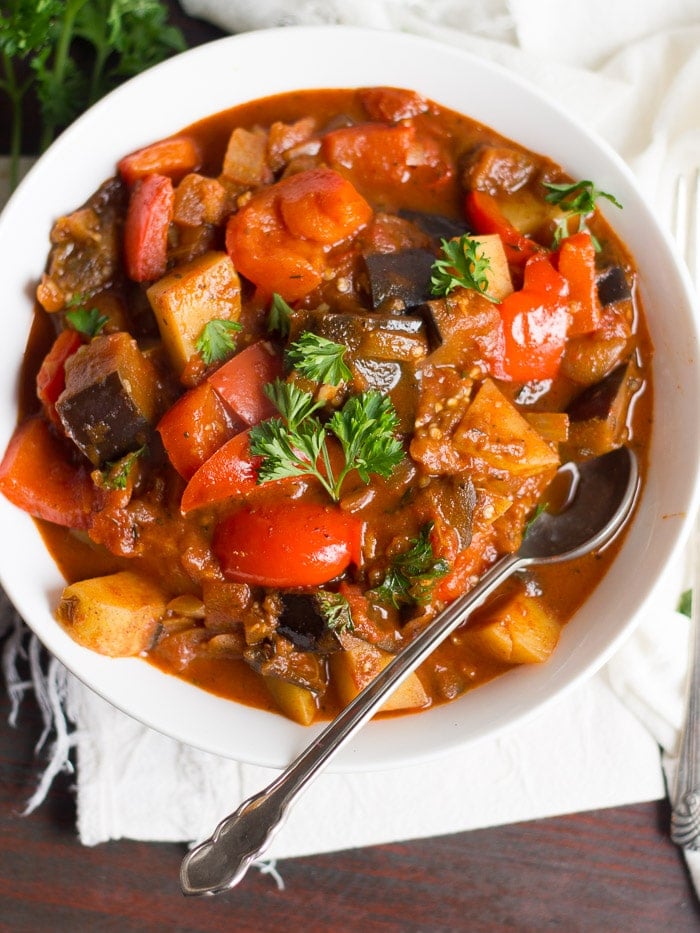 If your eggplant has been hanging around for a while, or shows some brown spots when you cut into it, be sure to salt it. Chop the eggplant, then place it into a colander and sprinkle generously with salt. Allow to sit for 30 minutes, then rinse off the salt, pat the pieces dry, and proceed with the recipe.