These vegan banana pancakes are light and fluffy with just a touch of sweetness and a hint of cinnamon! Easy to whip up and perfect for weekend breakfasts.

Vegan pancakes are my go-to treat breakfast for weekends. They're easy, delicious, and you can't go wrong with anything that gets drizzled in loads of maple syrup.

But you know what I love even more than regular old vegan pancakes? These vegan banana pancakes. They're glorious, pack just the right of banana flavor, and are perfect for using leftover bananas.

Bananas actually perform double duty here! As you may or may not be aware, bananas make great egg substitutes. Since these pancakes are vegan, they're obviously egg-free. But the bananas supply moisture and act as a binder (the same things that eggs do), so you wouldn't know it. These features are bonuses, in addition to that delicious banana flavor that goes so well with maple syrup and melty vegan butter.

So basically what I'm saying is, these vegan banana pancakes have a lot going for them.

Ready to whip up a batch for breakfast? Let's go!

Generally, anytime you're baking with bananas or making any kind of cakey bready thing (like pancakes), your bananas must be overripe. This means lots of brown spots! The banana might even have more brown than yellow on the outside.

Using overripe bananas is important not just for the flavor of the recipe, but also for the texture. Bananas that aren't overripe will be too starchy, leading to dry, chewy pancakes. This holds true for all kinds of banana recipes, like vegan banana bread and vegan banana muffins.

Tip: To speed up the ripening process of your banana, store it in a paper bag (preferably with some other bananas) at room temperature.

Top your vegan banana pancakes with some vegan butter and maple syrup.

Store leftover vegan banana pancakes in a sealed bag or container in the fridge for up to 2 days or in the freezer for up to 3 months. I like to stack them in a large freezer bag, separated by sheets of parchment paper.

To reheat, thaw them if frozen, then place them on a baking sheet in an 400°F preheated oven until hot. You could also warm them up in the microwave.

Can these pancakes be made gluten-free?

I'm not sure! My best advice would be to try using an all-purpose gluten-free flour blend, but I haven't tested the recipe this way, so no promises!

Can I make these pancakes with whole wheat flour?

You can, but I'd recommend either using whole wheat pastry flour, or a mix of whole wheat and all-purpose flours.

Why aren't my pancakes rising?

Why are my pancakes sticking to the pan?

Make sure you're using a good nonstick surface. This is essential. I personally like well-seasoned cast iron. Also make sure you're using enough oil and adding it to the cooking surface between pancakes. Finally, the skillet needs to be hot enough! Take the time to preheat it before adding any batter.

What are some good add-ins for vegan banana pancakes?

Try chocolate chips (Enjoy Life brand are vegan), blueberries, raspberries, or walnuts! If you use chocolate chips or nuts, I recommend stirring them right into the batter. For berries, instead try placing them on the circle of pancake batter right after you've poured it onto the cooking surface. 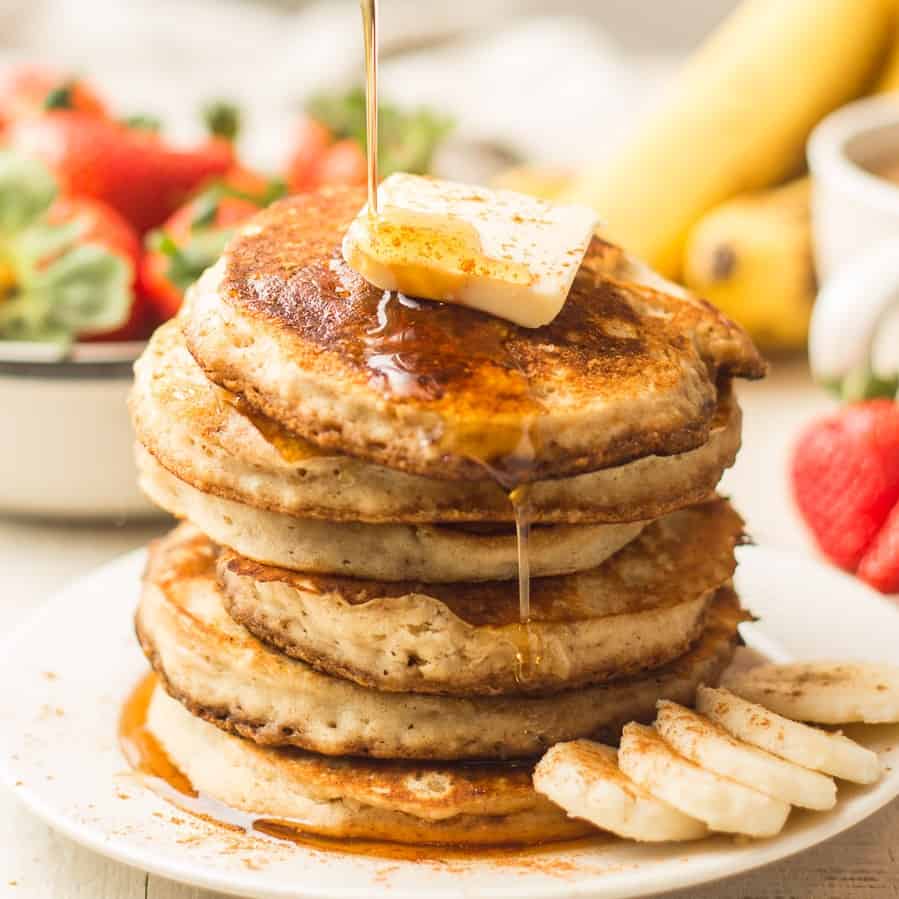 These vegan banana pancakes are light and fluffy with just a touch of sweetness and a hint of cinnamon! Easy to whip up and perfect for weekend breakfasts.