×
You are here: Home / Guides / A Baker's Guide to Vegan Egg Substitutes (with Cheat Sheet!) 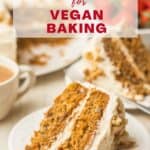 New to vegan baking? This guide will help you navigate the world of egg substitutes, and comes complete with a handy cheat sheet! Follow these tips and you'll be baking without eggs like a pro in no time.

Spoiler alert: the graphic right beneath this text has all the answers. Well, sort of.

Did I just ruin the whole post with that little graphic? No. There's more to it. This is worth reading, I promise. That's just your cheat sheet. Like in physics class when you ditched all semester but thought you'd be okay because the test was open book...but you weren't. It's kind of like that. (Fine. That was me, not you.)

Anyhow, vegan baking can be pretty intimidating, and it took me a long time to start experimenting with it. While I'd heard that certain things like bananas worked as egg substitutes, I didn't really buy it. Seriously, I thought people who said that might be deluding themselves — eating cakes that fall apart into a pile of sad dry crumbs and claiming that it was just as good as any non-vegan version.

I know better now. In fact I've veganized a number of old favorite baked-goods recipes that turned out better than the originals.

There are lots of options available as far as egg substitutes are concerned, and the key is knowing which choice to make in what circumstance. It's a learning experience. After a while you develop a feel for things, but there are certainly some guidelines that can be of help.

Disclaimer: Not all of these suggestions will work all of the time. Vegan baking from a non-vegan recipe is for the adventurous, not the perfectionist.

90% of the time I'm able to get a recipe to work using these guidelines, but sometimes I'm not. That chocolate jelly roll style cake that called for 5 eggs and no flour? Yeah, despite three attempts, the vegan version never happened. I knew that would be a challenge though.

If you're up for some fun and experimentation, go to it, and start simple. Muffins are a great beginner's intro to vegan baking.

The Role of Eggs in Baking

Eggs do a lot for our baked goods, and it's important to consider what they do in a particular recipe when deciding what egg substitute to use.

The functions of eggs in baking include the following:

Let's talk about different egg alternatives and when you might want to use them!

This one is easy. Substitute one mashed up, overripe ripe banana for one egg. This egg replacement works best in dense baked goods, such as quick breads and muffins. Obviously, it will add some banana flavor, which may not be too detectable if you're just subbing for one egg, but you'll certainly taste it if you use any more than one banana.

Tip: Keep a few frozen mashed bananas on hand at all times, so you have them when you need them! Just peel them and seal them up well in freezer bags and airtight containers. Thaw when ready to use, and include any juice that seeps out of the thawed banana in your recipe.

Silken tofu can be a bit tricky, but when it works out I absolutely love the results. Silken tofu often results in a denser and moister baked good, so it works in many of the same recipes as bananas, but without adding any flavor.

It also adds a bit of protein, which is a nice bonus. Substitute ¼ cup of silken tofu per egg. Silken tofu is available at most supermarkets these days and pretty much all health food stores.

Tip: Some brands of silken tofu are available in soft and firm varieties. Soft tends to work best for baked goods, but firm will do in a pinch.

This one has it's good and not so good aspects. The pros: unflavored vegan yogurt won't really alter the taste of your baked goods, it's simple, and relatively easy to find these days. The cons: its binding and leavening abilities aren't that much better than plain old non-dairy milk.

With that said, use vegan yogurt as an egg substitute where the dry ingredients have some natural binding capabilities (like oat flour and wheat flour), and consider adding a smidge of extra baking powder and/or soda.

Tip: Vegan yogurt can be made from all kinds of non-dairy milks. You'll probably find almond yogurt, soy yogurt, and oat yogurt at the store, to name a few. They're all pretty much the same as far as baking is concerned.

Flax eggs are my go-to vegan egg substitute. They work in a wide variety of recipes, and ground flax seeds are easy to keep on hand.

Cakes, cookies, quick breads, muffins, pancakes...I've gotten them all to work with flax eggs, and I can recall very few flax egg failures. Even though I don't use chia eggs quite as often, they're pretty much interchangeable with flax eggs.

For each egg you need to replace, just whisk 1 tablespoon of ground flaxseed or chia seeds with 3 tablespoons of water. Let it sit for 10 minutes, and like magic, you'll have a slimy and surprisingly egg-like mixture that you can throw right in to you mixing bowl.

You should be able to pick up chia and flax seeds at most supermarkets, and just about all health food stores.

Pumpkin puree is the egg substitute I use most often from this category, but I've also had success with sweet potatoes and applesauce. Generally speaking, you don't want your baked goods to taste like, say, broccoli, which is why I haven't branched out too much here.

In recipes where a little sweet potato or pumpkin flavor is welcome, these ingredients work great. Pumpkin is easy, since it's available in cans. If I'm using a sweet potato I'll usually bake or microwave, and then mash it. ¼ cup of puree works in place of 1 egg.

Tip: Since fruit and veggie purees are perishable, I like to freeze them in single "egg" portions of ¼ cup each.

Cornstarch, being a thickener, yields a viscous, eggy substance when mixed with water in the right proportion. Use 2 tablespoons of cornstarch plus 3 tablespoons of liquid for every egg you need to replace.

Also known as aquafaba! Chickpea brine can be whipped up like egg whites to make meringue. It's amazing! And it's also fussy, which is why I've yet to post a vegan meringue recipe on this site. Sometimes it works great, other times, not so great. But aquafaba also works as an egg substitute in regular old baked goods too, and much more reliably.

Just replace each egg with ¼ cup of aquafaba.

Seriously. I do this quite often and it works! The how-to is easy: follow a recipe and skip the eggs. More likely, skip the egg.

That's the catch. It really only works in recipes that call for very few (i.e., one or two) eggs and use some other type of leavening agent and/or binder.

If anything, add a few tablespoons extra of liquid such as water or soy milk. Once you've been experimenting with vegan baking for a while, you'll get a feel for when you can get away with this. If you make something with a flax egg and find yourself asking if that was really necessary, it probably wasn't.

I've included this ingredient as a bonus because while it doesn't behave functionally as an egg substitute in baking, it does add eggy flavor to recipes.

Kala namak is a type of salt that's high in sulfur content. Guess what else contains lots of sulfur? Eggs! That sulfur is much of what gives eggs their distinctive flavor. So when we add kala namak to recipes that normally call for eggs, the dish often tastes quite a bit like it was made with eggs.

Kala namak is sometimes called black salt (even though it's actually pink in color) and is used frequently in Indian cuisine. You can buy it in Indian markets and online.