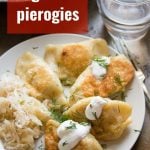 Tender pockets of dough are stuffed with a mix of hearty mashed potatoes and sweet caramelized onions, then pan-fried until golden to make these comforting vegan pierogies.

Pierogies have a special place in my heart. I didn't discover these things until after going vegetarian back at the age of thirteen. I think mom bought a box of frozen pierogies thinking they'd be a good meatless main dish for me and once I tasted them I was appalled that I hadn't had one before. I'd been missing out. But whatever, I just found my new favorite thing ever.

I have come across store-bought vegan pierogies in plain old potato or potato and onion flavor. And they're good. But I think I got spoiled by the cheesy ones I ate when I was younger.

So I decided it was time to create a killer vegan pierogie recipe. Mission accomplished!

The filling for these guys is tasty enough to eat on its own. I seasoned up the mashed potatoes with just a touch of nooch and some white wine vinegar to mimic the cheesy flavor I'd been missing. And then I took things a step further and added caramelized onions, for extra savory flavor with just a touch of sweetness. So good!

My pierogies aren't winning any beauty pageants, but I really don't care because they were incredibly tasty.

One word of caution: seal yours tight! I had one split open during boiling. Press the edges super tight together — tighter than you think you need to, and if you have any trouble try applying some water to the edges of your dough before sealing.

These are a bit of work, so I recommend making a big batch. Boil them all now, then seal up and freeze any that you won't be eating right away. When you're ready for them, just thaw and cook them in some vegan butter. 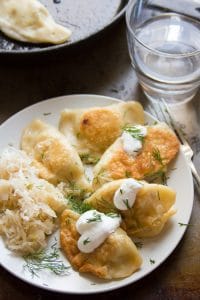 Tender pockets of dough are stuffed with a mix of hearty mashed potatoes and sweet caramelized onions, then pan-fried until golden to make these comforting vegan pierogies.