This blog definitely has some favorites as far as recipe types are concerned. There are just some varieties of meals that are so good I feel like I'll never be at a loss for ingredients and flavor combinations. I've definitely got a thing for stir-fries. Granola is another repeat offender. Curries, however, probably have the reigning top spot. It's hard to go wrong with veggies simmered in rich spicy broth, especially when that broth involves coconut milk.

I had a black bean curry a few weeks ago at a new-to-me Indian restaurant. I always try and order something unfamiliar when dining outside my usual establishments, and this place had a black bean curry on the menu, which is something I'd never tried before. Apparently it achieved the desired result (being new recipe inspiration) because here I am sharing my own black bean curry, and wondering where this deliciousness has been all my life.

My black bean curry is quite a bit different from the one I had a few weeks ago. I added spinach for one, just because I generally like to balance out rich dishes like this one with some veggies, and I always like the combination of spinach and black beans. I also went with coconut milk for the base, which makes this dish incredibly rich and filling. I almost wanted to stuff this one into a burrito, as the beans are a bit reminiscent of Latin American fare, but I didn't because one bowl of this atop rice was about as much as I could handle.

This is definitely a new favorite, and after making it I'm pretty hopeless as far as concluding my black bean kick, as I'm certain I'll be making it again and again. 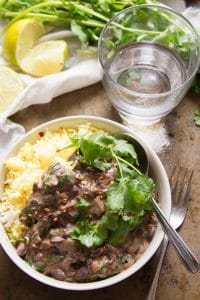 Include the seeds from your serrano pepper for (a lot) more heat. For a milder version, leave them out.