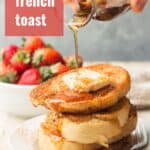 You can't beat a classic! This vegan French toast tastes like the stuff you grew up eating, but it's totally eggless and dairy-free. Grab some maple syrup and dig in!

If you're a sweet breakfast type of person like me, then you probably want a good classic French toast recipe in your back pocket. But if you're vegan that means eggs and dairy, the two main ingredients in French toast, are off the table.

But fear not! Believe it or not, vegan French toast is really easy to make. It's not as complicated as you may think! You don't actually need eggs, you just need the right batter so you can dip your bread and grill it. That's really all there is to it.

There are actually a LOT of things you can use to make an egg-free, dairy-free French toast batter. It's not actually that important what the batter is made of. Bananas work, tofu works, even chickpea flour works! I've tried them all, and shared recipes for a bunch of variations.

But I've yet to post a recipe for super simple, easy vegan French toast that tastes like the non-vegan stuff you grew up eating. Until today, anyhow!

This recipe uses a super simple mixture of pantry staples, along with a few surprising seasonings to create a mixture that's about as close to the eggy mixture we all grew up dipping our French toast in. And because of that, it tastes just like regular French toast!

Tip: Feel free to adjust the seasonings to your liking. Prefer sweeter French toast? Up the maple syrup! Like a little extra eggy flavor? Use more kala namak! Got some fun spices on hand? Throw them in! Nutmeg, cloves, and cardamom would all be delicious.

Tip: Feel free to play with the consistency of the batter by using less cornstarch for a lighter batter, more cornstarch (or even a bit of flour) for thicker batter.

Tip: I like to take a spoon and dribble some batter around the edges of my French toast while it's cooking. It mimics those eggy clusters that sometimes cling to the edges of non-vegan French toast.

Tip: One of the challenges to making great plant-based French toast is its tendency to stick to the pan. Use a really good nonstick surface, like cast iron, and make sure it's nice and hot before placing the bread in it. I also find it helps to take a spatula and loosen the bread from the cooking surface after the first minute or so of cooking.

Tip: One of the challenges to making great vegan French toast is its tendency to stick to the pan. Use a really good nonstick surface, like cast iron, and make sure it's nice and hot before placing the bread in it. I also find it helps to take a spatula and loosen the bread from the cooking surface after the first minute or so of cooking.

I like to serve my French toast with some vegan butter and a drizzle of maple syrup.

Store leftover vegan French toast in a sealed bag or container in the fridge for up to 3 days, or in the freezer for up to 3 months. Reheat it in a 400°F oven until hot.

I think so! Try using your favorite gluten-free bread. I haven't tested this myself, but I can't see why it wouldn't work.

Why does this recipe include nutritional yeast? Is this ingredient necessary?

The nutritional yeast adds a touch of savory flavor. Think about it: traditional French toast is made with eggs. Eggs are savory! You won't notice the nooch, and it's not strictly required, but it will make your toast taste more authentic.

Can I use this recipe to make French toast sticks?

Absolutely! Just use a square-ish bread (but preferably one that's still pretty sturdy), cut the crust off each slice, and cut it into three strips before dipping and frying. 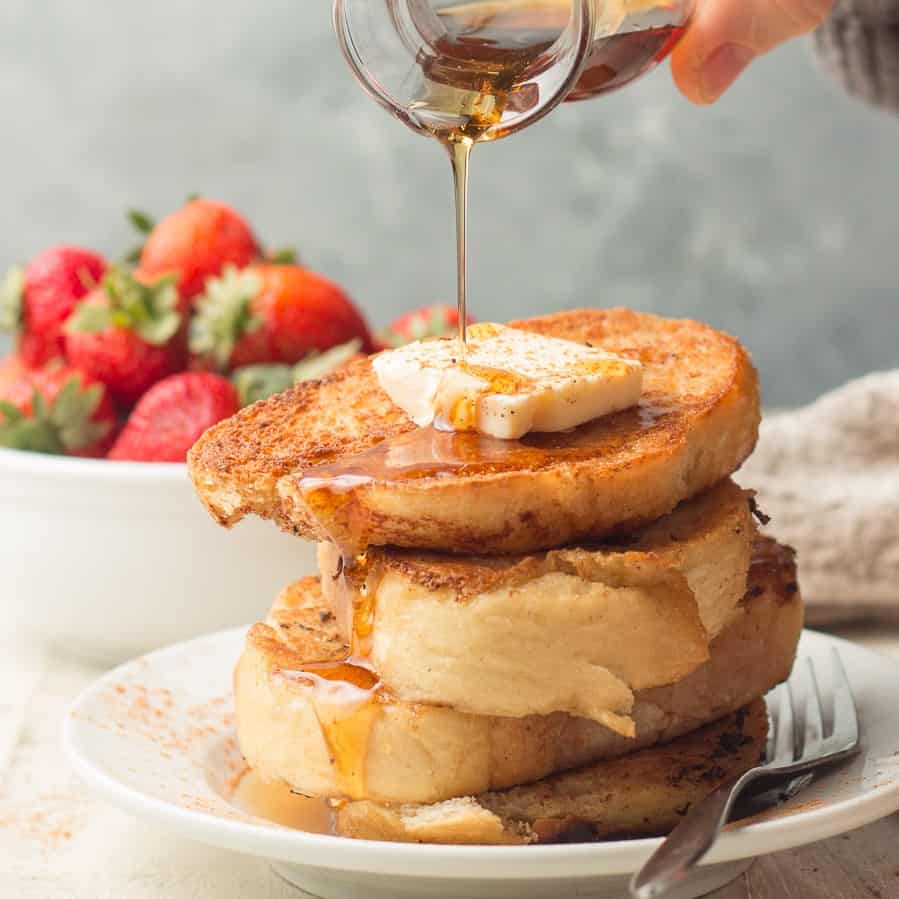 You can't beat a classic! This vegan French toast tastes like the stuff you grew up eating, but is made with absolutely no eggs or dairy. Grab some maple syrup and dig in!