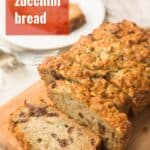 This vegan zucchini bread is bursting with juicy raisins, crunchy walnuts and cinnamon flavor! It also features a magic ingredient for adding a touch of sweetness and perfect texture. Spoiler: it's banana!

Zucchini season is on the way and I for one am ready with a killer recipe for vegan zucchini bread.

This was adapted from my mom's recipe. She's had it forever, and when I told her I was working on a vegan zucchini bread recipe, she insisted I base it on hers, because it's the best. I had to agree with her on that, so I went along with it!

How to Make Vegan Zucchini Bread

The following is a detailed photo tutorial on how to make this dish. Scroll all the way down if you'd like to skip right to the full recipe!

Vegan zucchini bread will keep in a sealed container at room temperature for 4 or 5 days, or in the freezer for about 3 months.

Can this be made gluten-free?

I think so, but I haven't tested any gluten-free variations. My best recommendation would be to use an all-purpose gluten-free flour blend.

It tastes subtly of banana, since the recipe only calls for a single banana, whereas I'd normally use three bananas for vegan banana bread.

Do I need to squeeze the water out of the zucchini before adding it to the batter?

Nope! The zucchini adds moisture, and squeezing out the water will give you a bread that's too dry.

Does the banana absolutely have to be overripe?

Yes! Using a banana that's not ripe enough will add too much starch to your batter and mess with the texture of your bread.

How big is a medium banana?

A medium overripe banana weighs about 5 ounces or 140 grams.

This vegan zucchini bread is bursting with juicy raisins, crunchy walnuts and cinnamon flavor! It also features a magic ingredient for adding a touch of sweetness and perfect texture. Spoiler: it's banana!