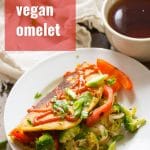 This omelet is made from beans! That's right — it's totally vean! Chickpea flour whips up to make the batter for this egg-free omelet, but the real magic is black salt, which gives it a surprising and amazingly realistic eggy flavor.

Chickpea flour is kind of amazing stuff. It's the only flour I know of that not only works in baked goods, but also does a pretty darn good job of replicating eggs, as I discovered back when I made this scramble.

Not only that, but it replicates eggs in a way that tastes good to me. (Me being one who used to spit my eggs out and hide them in my napkin as a kid.)

Not only that, but it's really nutritious stuff, and incredibly filling. I'd say notably filling, because every time I eat a chickpea flour "egg" breakfast I feel the need to note how full I am after I finish, and how full I still am every hour thereafter. 11AM: "I finished that omelet two hours ago, and I'm still full!" 12PM: "I'm not even ready for lunch yet!"

So yeah, if you haven't started yet, time to get cooking with some chickpea flour. But there's more to this omelet than that. The real eggy flavor comes from black salt, also know as kala namak. Open a jar of this stuff and your house will smell like eggs cooking. No kidding.

In fact, you know how I just said I'd spit my eggs out as a kid? Well, yeah, I can't handle black salt in my vegan omelet. It's too eggy for me. I skip it when I'm cooking one of these for myself, but my husband who used to be the biggest egg head ever (<— So dorky of me. Sorry.), loves it.

First you make the batter which involves, like I said, chickpea flour and black salt, among a few other pantry staples. Mix it up and let it sit for a few minutes to settle.

Then you grill up the omelet just like a pancake.

The veggies get cooked up in just a bit of garlic and oil. I like to keep them on the tender-crisp side.

Plate the omelet and stuff it!

Tips for Making the Best Vegan Omelet Ever... 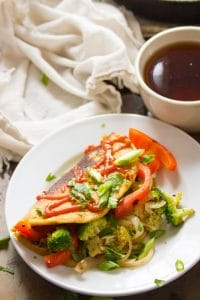 This omelet is made from beans! That's right: chickpea flour whips up to make the batter for this egg-free omelet, but the real magic is black salt, which gives it a surprising and amazingly realistic eggy flavor.

For the Vegan Omelet

For the Veggie Filling

For Serving (pick your favorites)

Nutritional information includes omelet and veggies. It does not include accompaniments.