Stuffed peppers like mom used to make, but these are vegan! These roasted bell peppers are filled with an Italian-spiced mix of lentils and rice, and topped with zesty marinara sauce. The perfect meal when you're looking for some healthy comfort food! 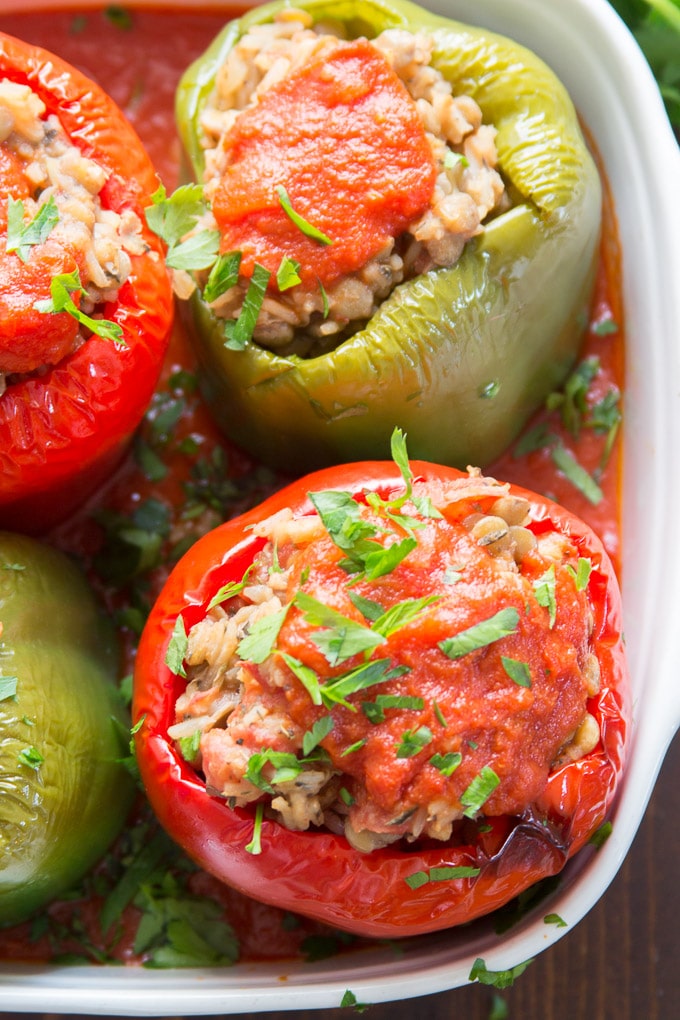 Stuffed peppers were a regular when I was growing up. They were usually filled with ground meat and rice, and served with tomato sauce — I'm guessing a lot of you guys ate pretty much the same thing when you were kids.

I decided it was time for a good old classic Italian stuffed pepper, recipe, vegan style. 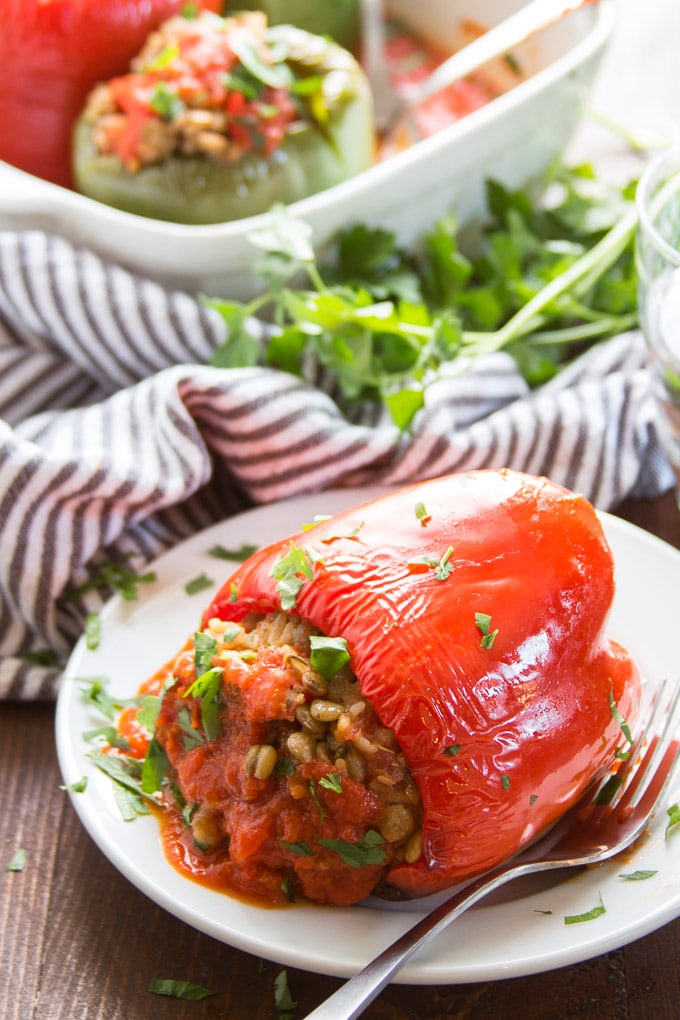 I used lentils in place of meat for these peppers. They're one of my favorite ground beef replacements, and they go great with rice!

You'll need to cook your lentils separately from the rest of your filling, or you can use canned lentils. My go to-method for cooking lentils: stick them in a pan, cover with a few inches of water, and boil until tender. Easy!

The rice cooks up in another pot. Start by sautéing some onion and garlic in olive oil. Next, add some broth, your rice, and Italian herbs. Bring the liquid to a boil, turn down the heat, cover the pot and let it do its thing. Don't peek! You want to contain all that heat and steam in the pot to get your rice just perfect.

When the rice is done cooking, stir in some tomatoes and your lentils. Your vegan stuffed pepper filling is ready! 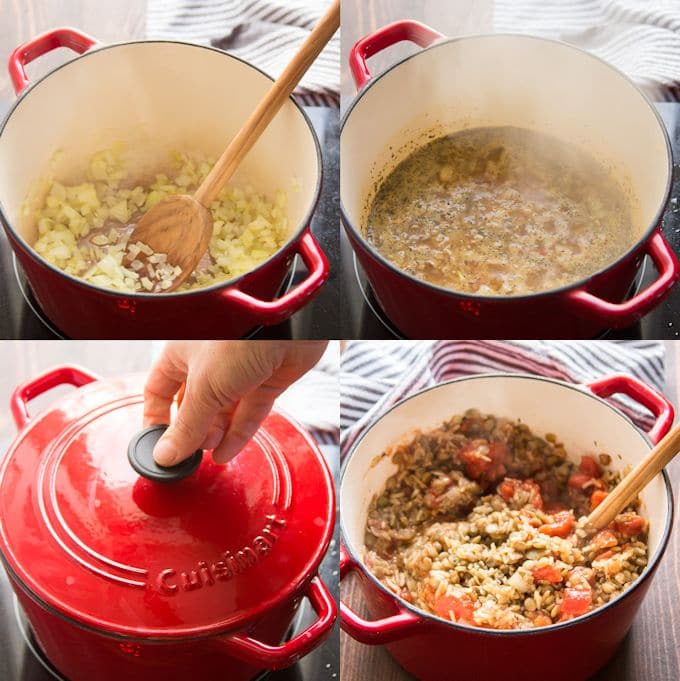 While the rice and lentils cook, start roasting your peppers. Cut the top off of each pepper, scoop out the insides, and rub it with olive oil. Stick your peppers in a pan and pop them in the oven to start cooking. 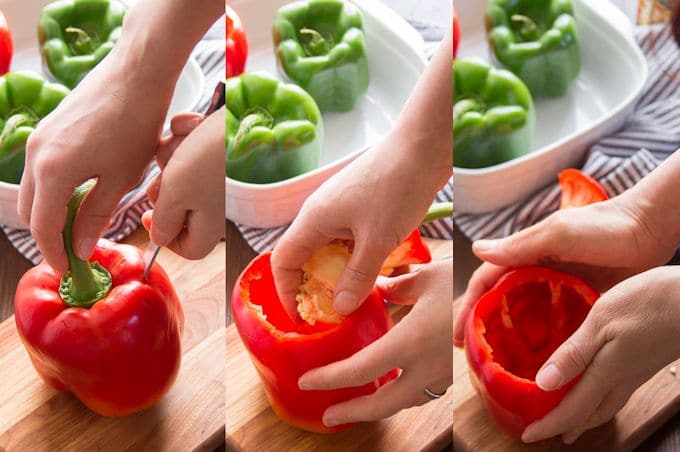 When your peppers are almost fully cooked, take the pan out of the oven, add some marinara sauce to the bottom, then stuff your peppers. Top each pepper with a spoonful of sauce, and stick everything back into the oven for a few more minutes. 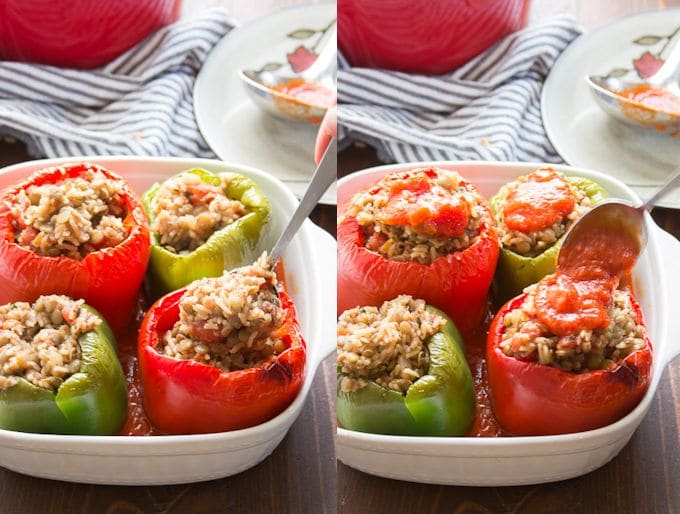 Top your peppers with some fresh herbs, and dig in! 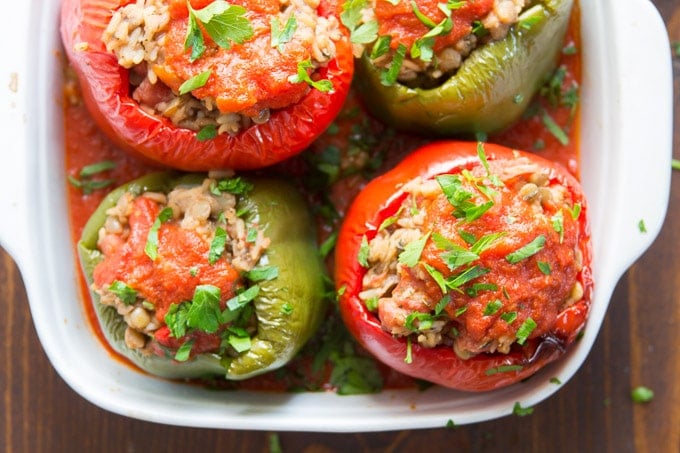 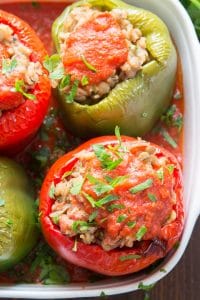 Stuffed peppers like mom used to make, but these are vegan! These roasted bell peppers are filled with an Italian-spiced mix of lentils and rice, and topped with zesty marinara sauce. The perfect meal when you're looking for some healthy comfort food!

If you're substituting canned or precooked lentils, you'll need 2 cups.