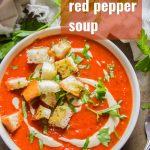 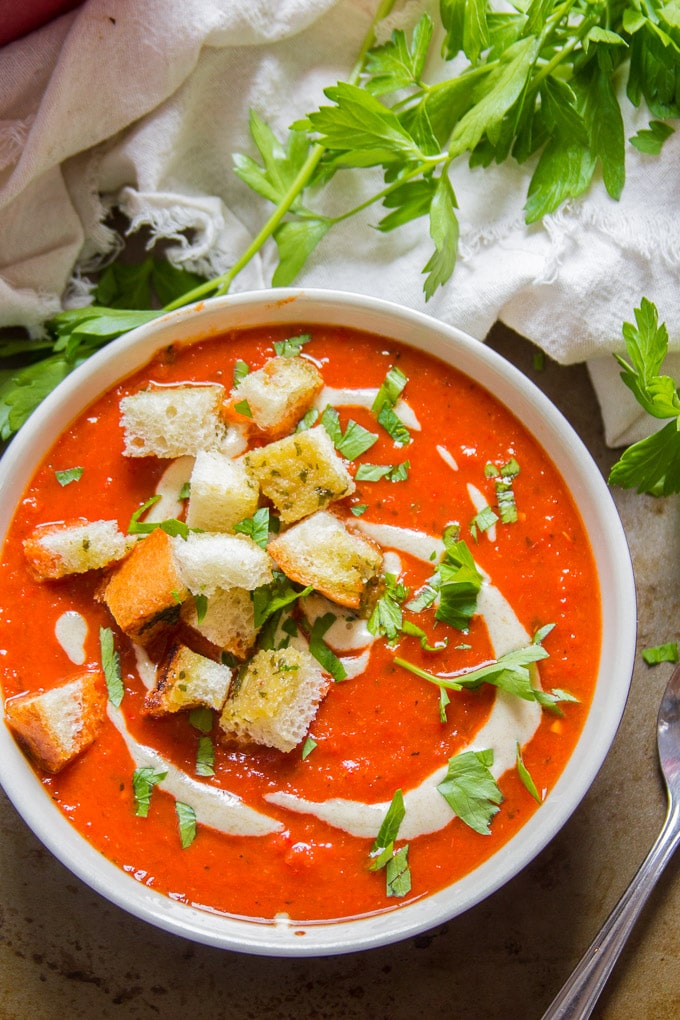 Here's something you might not know about me: I have an amazing ability to trash a kitchen. I know, pretty special right? Seriously though, I've been keenly aware of this lately, as the amount of daylight is quickly dwindling, and the time for photographing food is during the daylight hours, when I should be getting other work done.

A typical scenario that plays out lately is me deciding to cook up and photograph something in the middle of the day. "I'll just squeeze it in before lunch."

Right. This results in me rushing way more than I need to and transforming into a hurricane that spews dirty dishes and vegetable scraps everywhere in my path. I usually don't have time to clean up right then and there, so I abandon my disaster for later on, forget it exists, until I'm reminded upon reentry into the kitchen at dinnertime. Sigh. 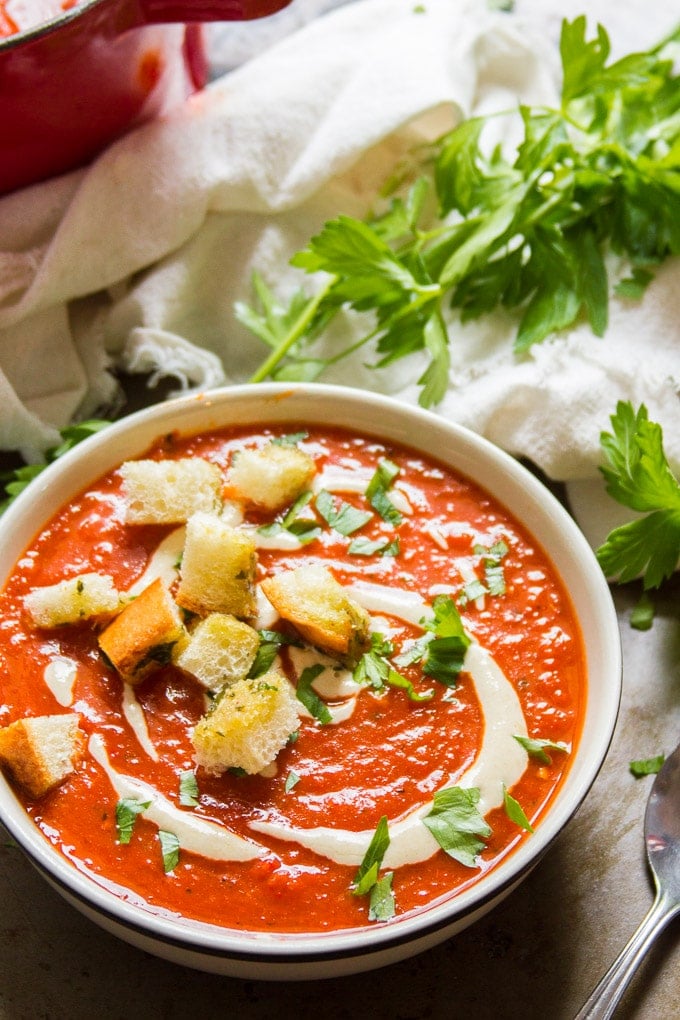 I console myself with the fact that messy food is the best food. This is a fact.

Well, this soup made a big mess, so I wasn't sure if I should warn you or try to explain myself. I'm not exactly sure what I decided on, but you can read into the above and decide for yourself.

I'm actually surprised it made such a huge mess, because it was really easy. Usually the simple stuff doesn't do that, which leads me to believe the mess was a result of my rushing and no fault of the soup.

Start by roasting up some red peppers and onions. And while you're at it, roast up some garlic too. I like to reserve a single garlic clove when I do this, and then I add it to the soup for a little bite. That's up to you though! 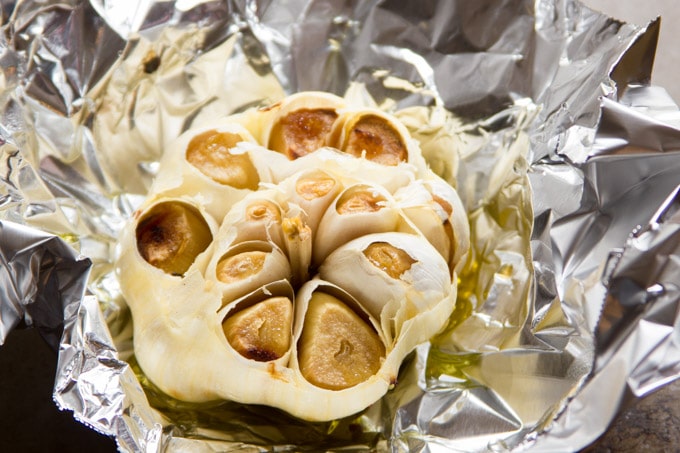 Roast the peppers until the skins start to blister. This will make it easier to remove the skins. I'm going to be totally honest here (so much of that in this post!): I usually get lazy and leave the tough bits of skin on the peppers. That's maybe 15% of the skin. Once you blend everything up you'll never know it's there. 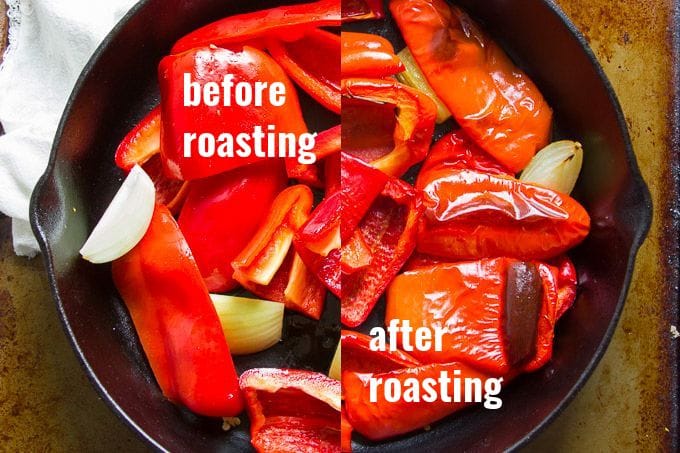 All your roasted goodies go into a pot along with some fire roasted tomatoes. I know, this is red pepper soup, right? So why the tomatoes? I've come to the realization that a little bit of tomato supplies some crucial acidity to red pepper soup. So use 'em! It'll be better that way!

Blend everything up. I acquired an immersion blender during the past year, and it's now one of my favorite kitchen tools. A food processor or blender will work too though.

Transfer everything to a pot, add some broth and seasonings and give it a brief simmer. That's it! 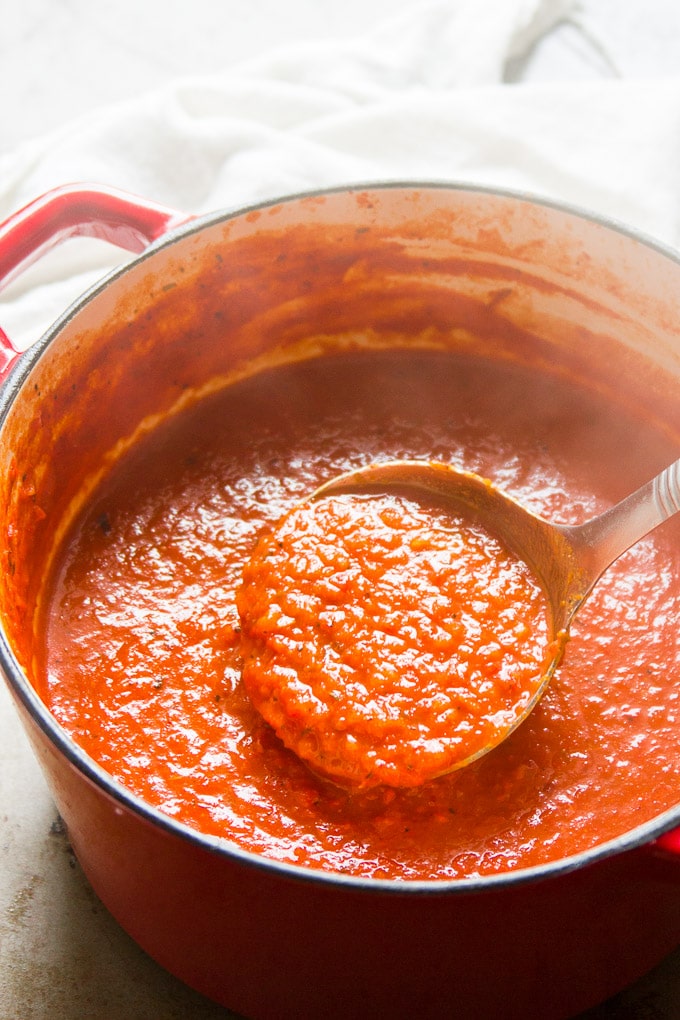 Serve with a dollop of tahini sauce and some garlic bread croutons. 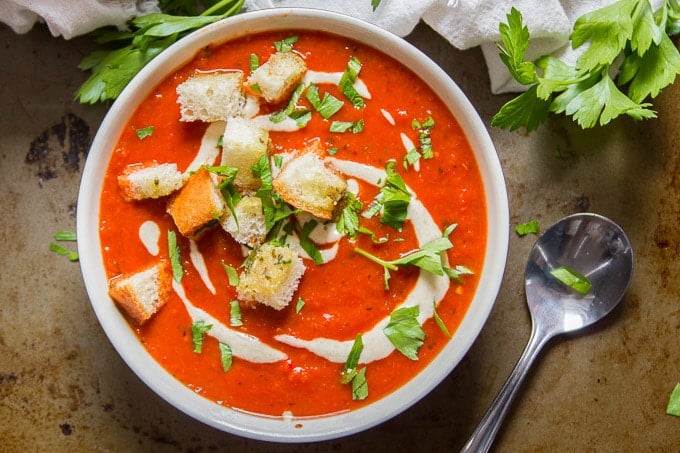 Hopefully you didn't trash the kitchen. Either way, enjoy! 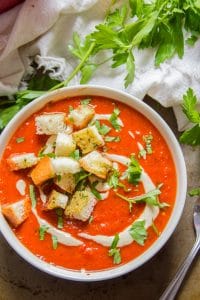 For the Roasted Red Pepper Soup

For the Garlic Bread Croutons

You can also stick your croutons into the oven with your veggies and allow them to cook for fifteen minutes or so, flipping at least once. You'll end up with something a bit more croutony and less garlic bready.

Nutrition information does not include tahini.