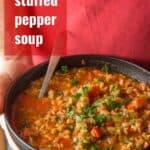 Soup. It's such wonderful stuff and there's so much to love about it.

Reason number ten million why I love soup: it's easy. Soup is so unfussy, and for the most part, it involves throwing stuff in a pot and letting it simmer.

Reason number ten million and one: lots of times, when you have a recipe that's a little more involved than you want it to be, you can turn it into soup. Cases in point: my stuffed cabbage soup, cheeseburger soup, and mac & cheese soup.

I found myself craving some vegan stuffed peppers the other day, but just didn't feel like going through all the steps to make them. And that's when this magical soup was born!

The following is detailed photo tutorial on how to make this dish. Scroll down if you'd like to skip right to the recipe! 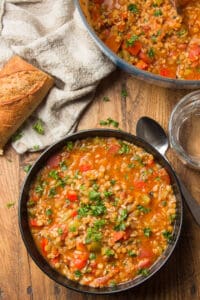