×
You are here: Home / Guides / 10 Best Substitutes for Honey 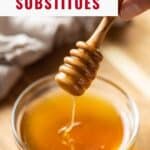 Looking for the perfect honey replacement? You've got plenty of options! Read on to learn everything you need to know about the 10 best substitutes for honey.

Honey is one of those ingredients that lots of people overlook or forget about in their vegan cooking. Obviously we need to replace dairy and eggs, but not everyone even realizes that honey isn't vegan. It comes from bees!

So perhaps you've come across what you thought was the perfect vegan recipe: no eggs, no butter, no milk...but it still calls for honey. D'oh!

The good news is that honey is actually pretty easy to replace, and that's in everything from baked goods to a cup of tea. The key is in knowing what honey alternative to use in what situation. Many of the ingredients we'd use to replace honey have their own unique flavors and characteristics, so they don't all work all the time.

Honey is a syrup made by bees, from nectar. Nectar is a sugary liquid produced by flowers. Bees gather up the nectar, digest it, and regurgitate it, turning it into honey. As a food product, honey is a natural sweetener that's thick and syrupy with a floral flavor. It's used for everything from baking cakes to spreading on toast to sweetening a cup of tea.

Maple syrup is a sweetener made from the sap of maple trees. It's the honey replacement I use most often in my cooking. Like honey, maple syrup is a liquid sweetener, so it can work well in recipes where honey is used to supply moisture.

The main difference between honey and maple syrup is in viscosity. Maple syrup is quite a bit thinner than honey. It also has a distinct flavor that's quite different from that of honey. In larger amounts this flavor might be detectable, but it might add something to the recipe! Maple syrup's flavor is a welcome addition both sweet and savory dishes.

The flavor of coconut nectar might be detectable in recipes, but that's not necessarily a bad thing — you might find that you've created a delicious new twist on an old favorite.

Yes, this is a thing! There are various commercial products as well as homemade concoctions going by the name of vegan honey. They can be made from a variety of ingredients, but coconut nectar, which we just talked about, is normally the main one, usually along with some fruity and floral flavors to make it taste more like honey.

You should be able to pick up a bottle of vegan honey at most health food stores, and it's a great one-to-one honey replacer in just about everything.

Agave nectar is a syrup derived from the blue agave plant, and it's an excellent honey substitute. In fact, I wrote an entire guide on how to substitute agave for honey!

Agave has a relatively neutral flavor and a similar consistency to honey. It can almost always be directly swapped out for honey in recipes. The only thing that you might miss is honey's flavor, though this probably won't be noticeable unless a recipe calls for LOTS of honey.

Where brown rice syrup really shines is in recipes that require some extra binding. Did I mention that this stuff is thick? It it! So think, in fact, that it can be used to hold things like homemade vegan granola bars together.

Molasses is a syrup that's a by-product of sugar refinement, and while it works as a honey substitute, molasses is one of those ingredients that you really need to be careful with because the flavor is intense! In fact, molasses comes in various forms with various intensities in flavor. (Blackstrap molasses is a super dark molasses and the most intense type!) But for the most part, any type of molasses will be detectable in a recipe.

This means you'll only want to use molasses in place of honey in those instances where the flavor might be a nice change. Cookies? Give it a shot. Pancakes? Maybe, if you're into that kind of thing. Coffee? Molasses might be a big much.

But like with molasses, we'd only want to use date syrup where a drastic flavor change won't ruin the recipe.

If you're simply looking for a cheap and easy way to replace the sweetness and moisture of honey, simple syrup is a great option! To make simple syrup, simply heat equal amounts of granulated sugar and water on the stove, stirring until the sugar fully dissolves.

Simple syrup won't add much to a dish in terms of flavor, and it's quite a bit thinner than honey, but if you just need a liquids sweetener in a pinch it's a great choice.

Corn syrup is a liquid sweetener derived from corn. It has a bit of a bad rap, mainly because of the use of high-fructose corn syrup in so many processed foods. The corn syrup you'll see in the baking aisle at supermarkets isn't this type though — the sugar contained in it is actually primarily glucose. It's still not exactly health food, but hey, we are talking about sweeteners here. They're all primarily sugar.

Corn syrup is generally sold as light corn syrup and dark corn syrup, with dark having a more intense, slightly molasses-like flavor. Corn syrup is cheap, readily available (you can get it at the regular grocery store), and can be substituted for honey in most recipes.

There are a handful of varieties of granulated sugar, including white sugar, brown sugar, coconut and turbinado sugars, just to name a few. I include them all in this category of honey substitutes.

Obviously, we can't use a granulated sugar in a recipe where honey is used to add moisture, unless of course we make it into simple syrup (see honey substitute 8, above!). But sometimes honey is used solely for sweetness, and in this type of instance, granulated sugars will work just fine!

You'll find flavor variation among the different varieties of granulated sugars, and I personally find coconut sugar to be the most honey-esque. It's really a matter of personal preference though!

One important point to note: most refined sugars in the United States aren't considered vegan, because they're processed with using animal bone char. Look for granulated sugars that are organic, all of which are processed using different (vegan-friendly) methods.