These seitan kebabs are made with teriyaki marinated seitan chunks and fresh veggies. Totally vegan, and perfect for summer grilling!

When I posted my recipe for seitan, I promised to give you something to do with that seitan. Well, here it is...seitan kebabs. My goal here was to give you a nice vegetarian grilling recipe in time for Labor Day. It's all part of one big master plan. How very sneaky of me.

Some people seem a little stumped when I talk about vegetarian grilling. Some omnivores who I know well and are very open to tofu, tempeh, seitan, and vegetarian treats of all sorts have looked at me like I'm nuts when I've invited them over for a barbecue. "You mean...you can do that?" Others have looked at me apologetically when inviting me over for some grilling. "I mean, you can come over and hang out...sorry you won't be able to eat like everyone else and all..."

Nonsense, I say. We vegetarians are grilling champions, and though a veggie burger set atop some foil on the grill (to avoid all those grilling meat juices) always does me up in a pinch, I've got plenty of honest to goodness, from scratch, delicious veggie creations to share with you guys in summers to come.

I've decided to get started here with an adaptation. That's often the easiest way to go. I mean, take your old grilling (or anything, for that matter) recipe, and sub something appropriate for the meat. It's really not tricky at all. I used seitan here, but I just as easily could have gone for tofu or some commercial meat substitute. In fact, I have used some meat substitutes for this one, and you can totally do that, but I wanted to make my own seitan here so I could get the pieces sized just right for kebabs.

The marinade recipe was actually given to my mom years and years ago by an old acquaintance. (Thanks, Mom's old buddy.) The original recipe called for pork, Mom made it for us with chicken throughout my childhood, and now I've subbed out that chicken for seitan. The marinade is nothing short of fantastic, and I've vowed to try it in some other dishes. When making this I had about twice as much marinade as I needed for my batch of kebabs (I cut it in half for this posting, so everything should work out well for you guys), and froze the remainder for future experimentation. I'll let you know how it works out.

Another thing I should mention is that these seitan kebabs don't necessarily require a grill. If you (1) don't have one, (2) don't feel like busting it out, (3) are reading this in January, or (4) can't/don't want to grill for any other reason, you can totally cook these in the oven. Instructions for doing that are included in the recipe, below. This batch fed us (two) for two days. On day one I grilled half the batch, and on day two I baked the other half. Both were equally delicious, for different reasons. The grilled batch had a great texture, with these amazing crispy spots of caramelized marinade, while the baked batch was super juicy and flavorful. 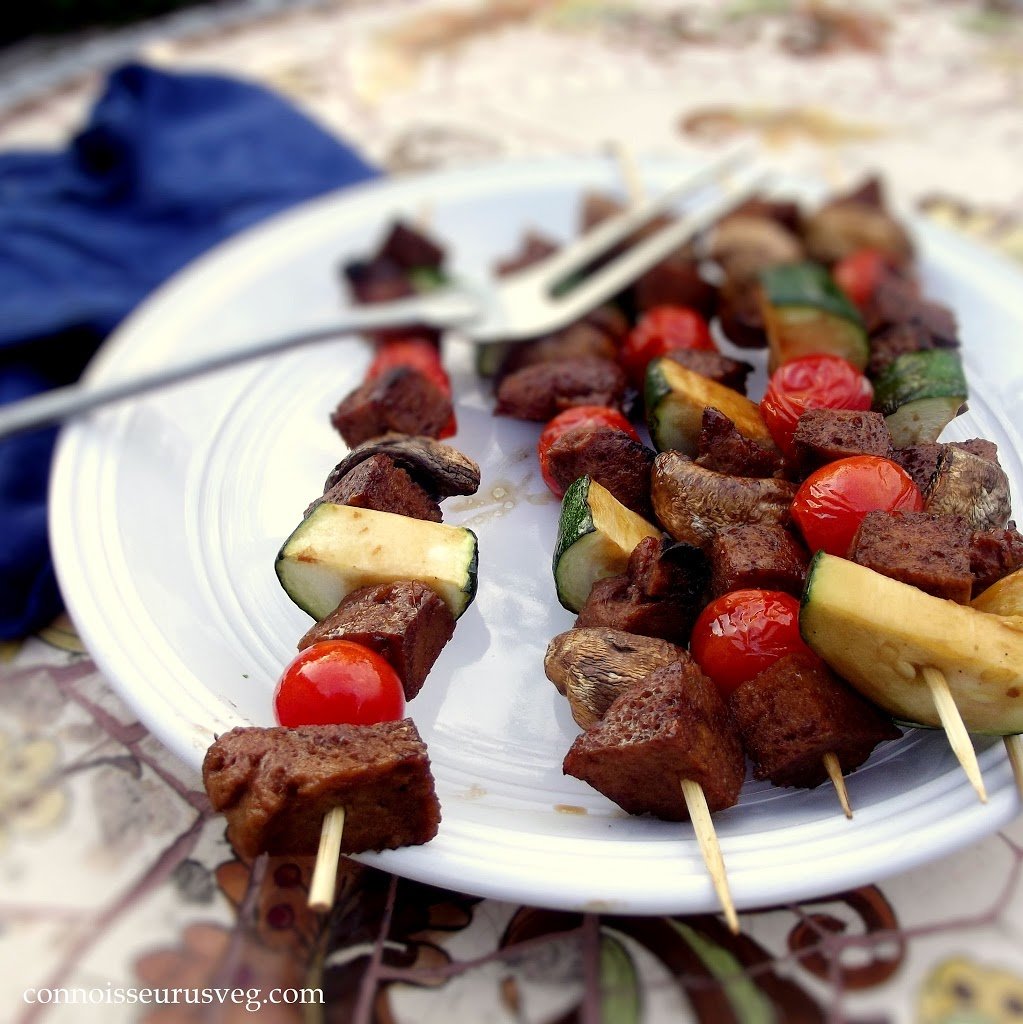 For the Teriyaki Marinade