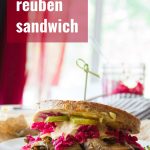 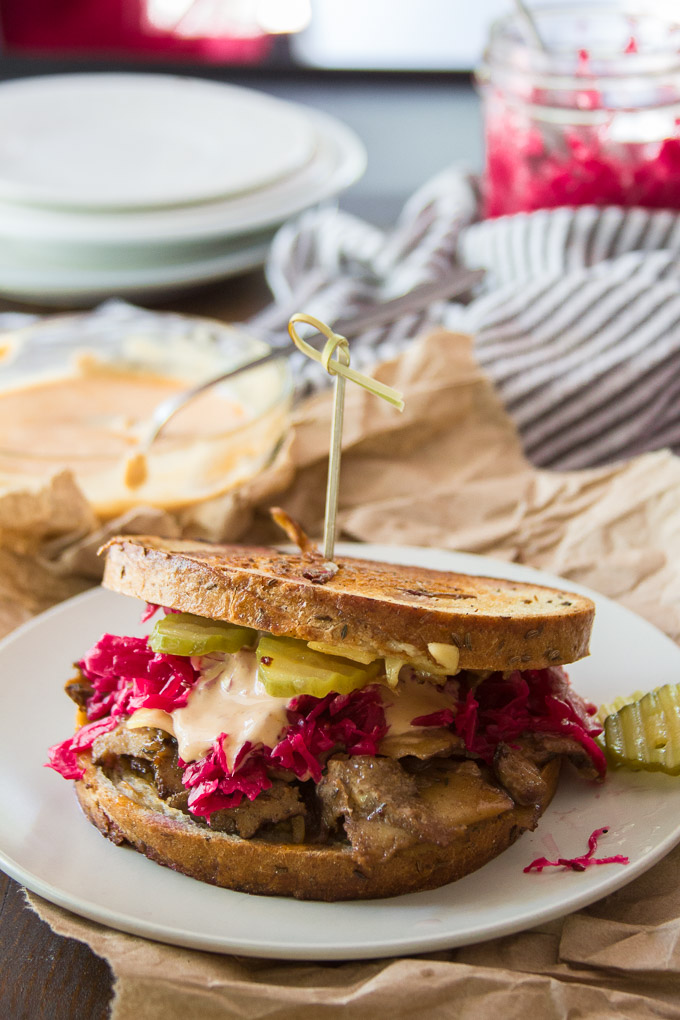 My husband was in the middle of transitioning to a vegetarian diet when I first met him, and he was really excited about my cooking. He made lots of suggestions for meatless versions of old favorites, and lots of them were dishes that I'd never actually had. One of his first requests was for a Reuben sandwich.

I've never had a conventional Reuben, so I relied on my husband's guidance for this one. He tells me it's pretty spot on. To this day it's a household favorite!

Using Seitan in a Reuben 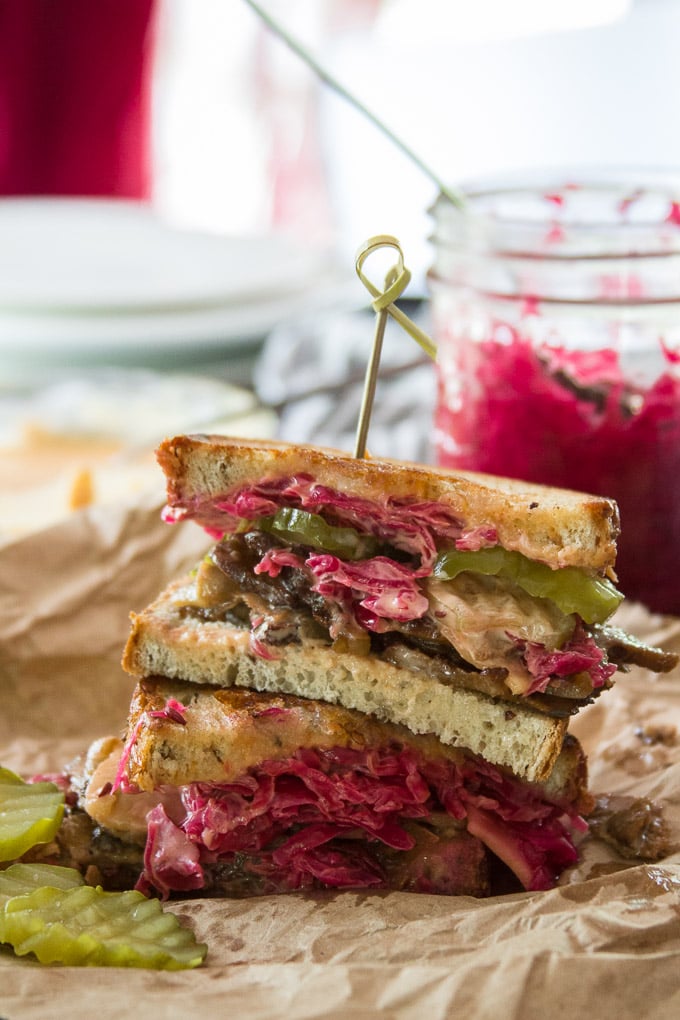 Not only have I never had a reuben, but I've never even had corned beef, which is the main ingredient in a conventional Reuben. Seitan is the most realistic beef substitute I know of, which is why I use it in my reuben sandwiches.

Seitan is also super easy to work with and loaded with protein.

I've made these sandwiches using my homemade seitan, as well as store-bought. Both work great! The advantage of making your own is that you make it in large chunks and then slice them super thin. If you prefer to use the store-bought stuff, just use a chef's knife to cut your seitan into strips that are as thin as possible.

How to Make a Vegan Reuben

The other sauce you'll need to make is for seasoning your seitan. For this, mix together some soy sauce, vegan Worcestershire, maple syrup, ginger, allspice, cloves and black pepper. You'll want this to be ready to go before you begin cooking the seitan. 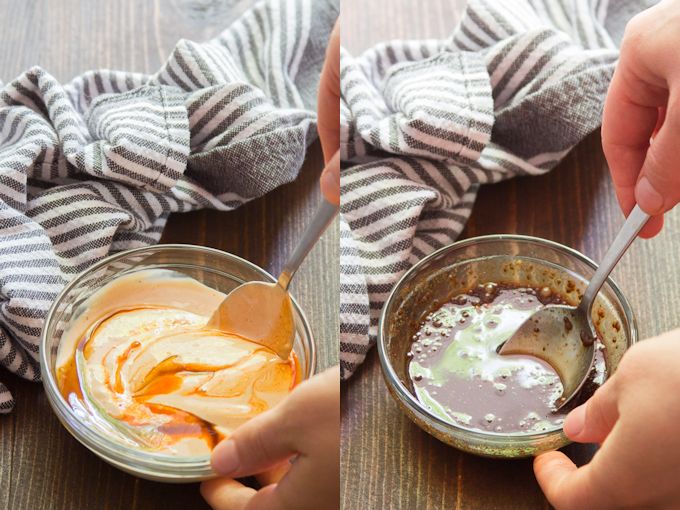 To prepare your seitan Reuben filling, start by sautéing some onion in a bit of oil. Let the onion brown slightly, then add some garlic. Once the garlic becomes very fragrant (after about a minute) add your seitan. Cook the seitan for a few minutes to get it to crisp up. And finally, add your sauce.

Let the seitan cook for a minute or so more, until most of the sauce dries up. Your filling is done! 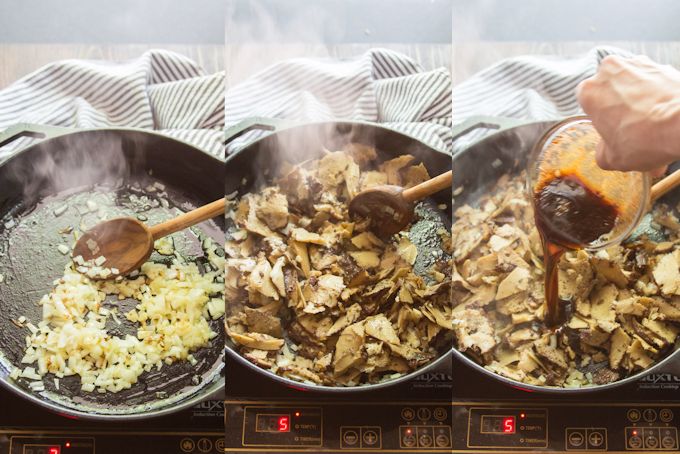 Grill up your sandwiches using rye bread slices slathered in vegan butter. Layer your seitan filling, dressing, some sauerkraut, and optionally a slice of vegan cheese and some dill pickle slices between the bread and grill to crispy golden perfection. 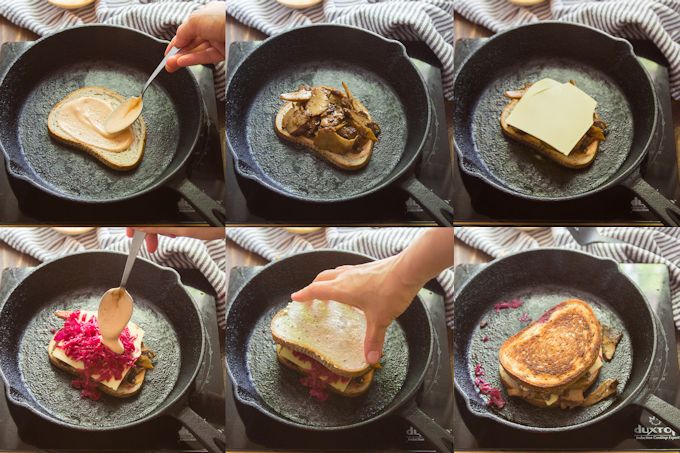 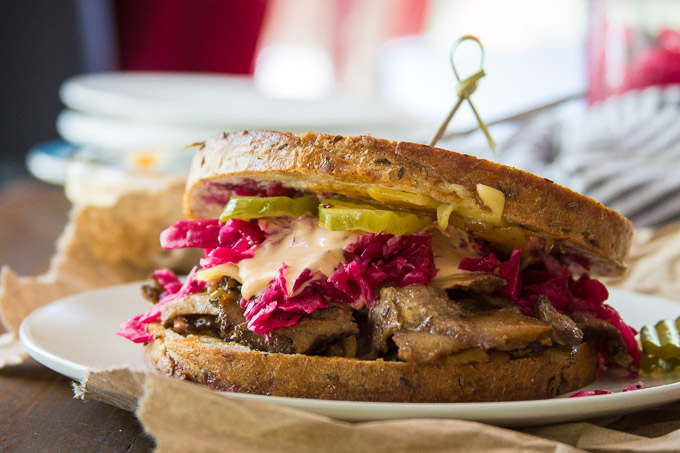 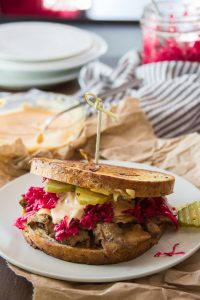 For the Vegan Russian Dressing

Nutrition information does not include cheese or pickles.