I've wanted to post a quiche recipe for a while now. Eggless egg-based dishes are a new source of excitement in my life! Seriously though, as I've told you guys before, if there is one animal-based ingredient that I have no problem doing without, it would be eggs. The taste and texture just never worked for me.

So I was very excited, as I'm sure you can imagine, to discover how much I actually love vegan versions of eggy recipes. Whatever it is about eggs that I don't like, tofu doesn't seem to have it. If you've been following for a while, you've probably seen my takes on tofu scramble, a vegan omelet, and most recently, huevos rancheros.

This post actually documents my second attempt at quiche. I tried something over the summer. Got up early, made a pie crust from scratch. Sauteed some veggies, blended tofu. It was a load of work. Two hours later I was sad to discover that I didn't like it. I tried. My boyfriend thought it was great. (Interestingly enough, he loves eggs.) I took photos, thinking I needed to revisit the quiche at a later time when I hadn't spent two hours slaving over it. Still didn't like it. The center wasn't quite firm enough, it reminded me too much of eggs...I don't know. I couldn't post it. No matter how much encouragement I get from others, I just can't post a recipe for a dish that I don't totally enjoy eating.

Well, it turns out my boyfriend must have really dug that quiche, because when he started seeking out some healthy breakfast food to take to work with him, the subject of quiche came up again. This is the type of problem I love to help out with, so of course I got really excited when I saw mini phyllo shells on display at the supermarket, thinking they would be perfect for portable breakfasts, and less work than making my own quiche crust. When I busted the box opened, I found that mini phyllo shells were a bit more mini than expected. They were maybe an inch or two in diameter. My vegan mini quiches would have to be pretty darn small. Here I thought he'd be able to eat one or two for breakfast. That would clearly not work. I made them anyway, and we did eat them for breakfast. In fact, we ate the whole batch for breakfast, which is actually good news, because you know what that means? You guessed...I actually liked these! The texture was better. They cooked up nice looked prettier. These were some tasty little suckers. Perhaps not ideal for breakfast due to their size, but perfect for appetizers or snacking on at parties, and oh, look at that: we're but one day away from the biggest party day of the year. Enjoy! 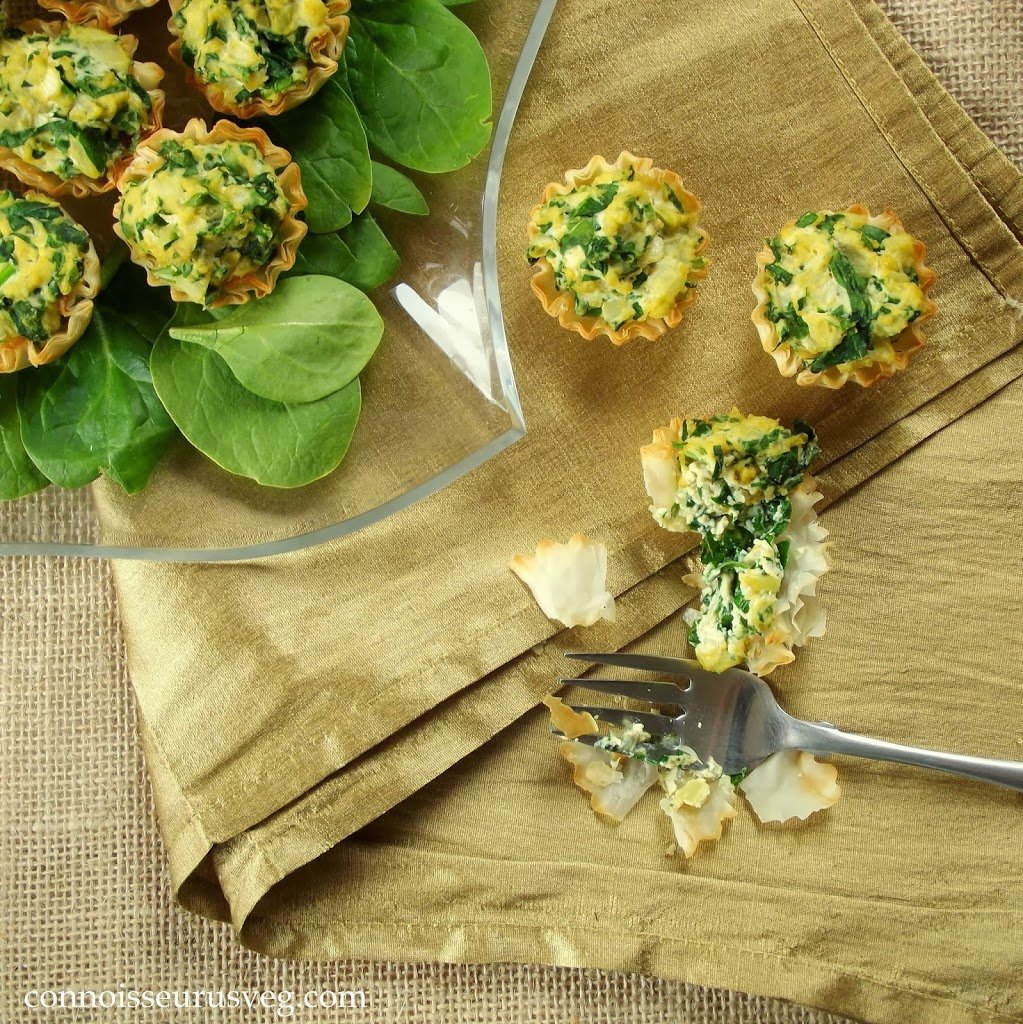