×
You are here: Home / Guides / How to Make Seitan 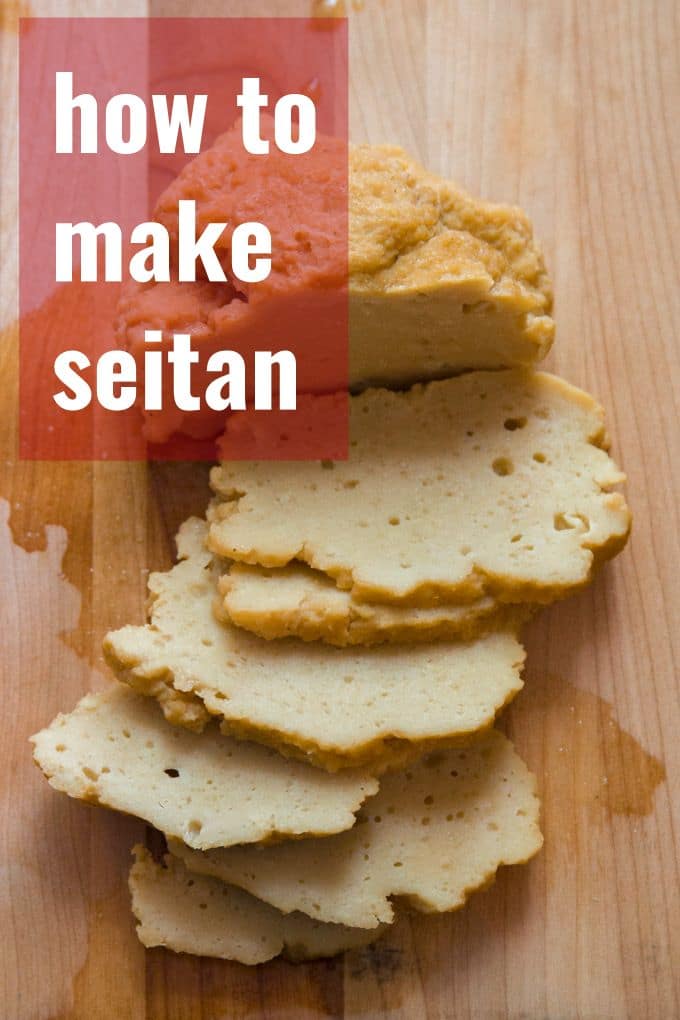 Early on in my blogging days I posted a recipe for seitan. Just recently I set out to make some updates to that post, namely, rephotographing it, when I realized something more was needed.

A recipe is what kept me from making seitan for about ten years. I'll explain what I mean below, but for now, suffice it to say, seitan is more of a how-to, choose your own adventure type food. Seitan is super easy to make with the ingredients that are readily available these days, and once you've made a few batches you can totally wing it.

I first heard about seitan when I was about nineteen. I was a big fan of the show Christina Cooks with the Class. I loved that show! Ate up all of her seemingly crazy veggie concoctions, literally. One day she busted out some seitan, and I was intrigued, to say the least. I eventually got my hands on some, and later branched out into making my own seitan.

My first experiences with homemade seitan involved following a recipe that called for rinsing and massaging a big ball of wheat flour dough for a half hour or so to isolate the wheat gluten, which was a huge pain in the butt. This was before powdered vital wheat gluten became widely available.

That recipe also involved a big piece of kelp known as kombu, which was meant to give the seitan a savory flavor. The recipe instructed me to use kombu, so I dutifully searched every Asian market within a few city blocks until I found some.

After that I didn't make seitan again for a while because (1) the whole dough rinsing process was just way to daunting, and (2) I didn't feel like searching for kombu again.

I totally had it in my head that kombu was essential to seitan making. In my defense, the cookbook I'd been using, which was probably written in 1972, acted like kombu was the biggest deal ever and without it your seitan would be awful.

I know better now, and this is why I'm giving you a recipe today with three flavor variations.

Also, you don't even have to follow the recipe. Read my instructions below and make seitan your way. The only essential ingredient is the vital wheat gluten, which, thankfully, you can get at natural foods stores and some regular old supermarkets these days. 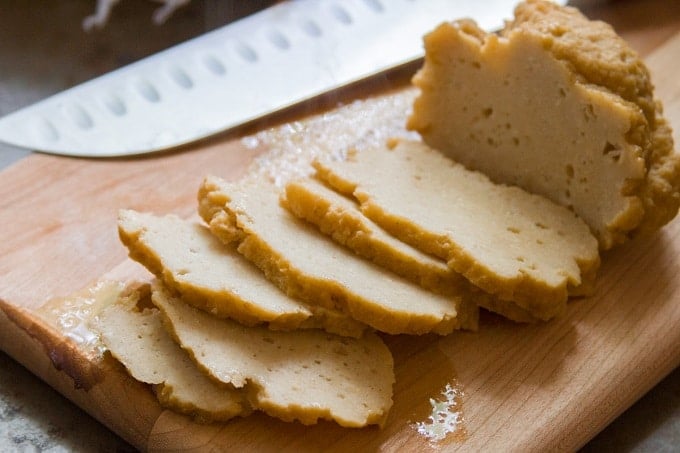 First off, it's a good idea to have some understanding of what seitan actually is. I feel like it makes people nervous! Seitan isn't as familiar as good old tofu. But it kind of is.

I don't eat a whole lot of store-bought meat substitutes though. I prefer homemade seitan because it's generally a lot better, and I know what's in it.

Seitan is made from wheat gluten, which is maybe why it scares people. But if you don't have celiac disease and you're not gluten sensitive, there's nothing to worry about.

Gluten is the protein that's in wheat. It's what gives bread dough its elastic, stretchy texture. When you isolate the gluten by removing the starch and bran, you're left with something that has a texture that's quite meat-like. Season it to taste like meat, and you've got seitan. 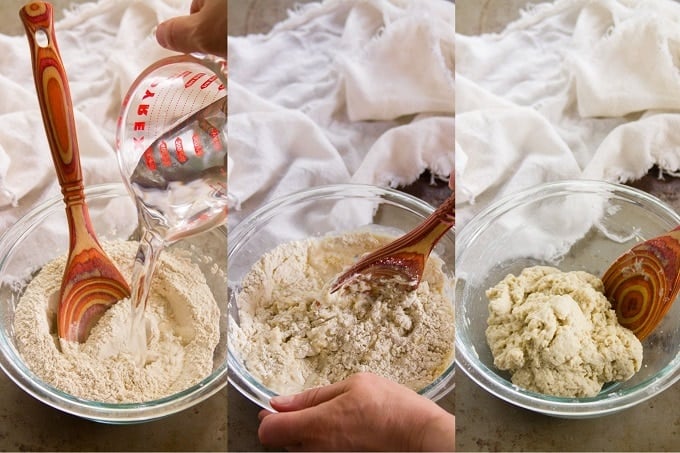 As you might have guessed, the dough starts with vital wheat gluten, which will be in powdered form. You can cut the gluten with another type of flour. I like to do this — I find gluten alone results in seitan that's a bit tough for my taste.

1 cup of vital wheat gluten to ¼ cup chickpea flour or soy flour is a good place to start. This will give you about 2 cups of seitan.

Add water. 1 cup is a good amount for the batch size we're working with. Mix and form a dough. 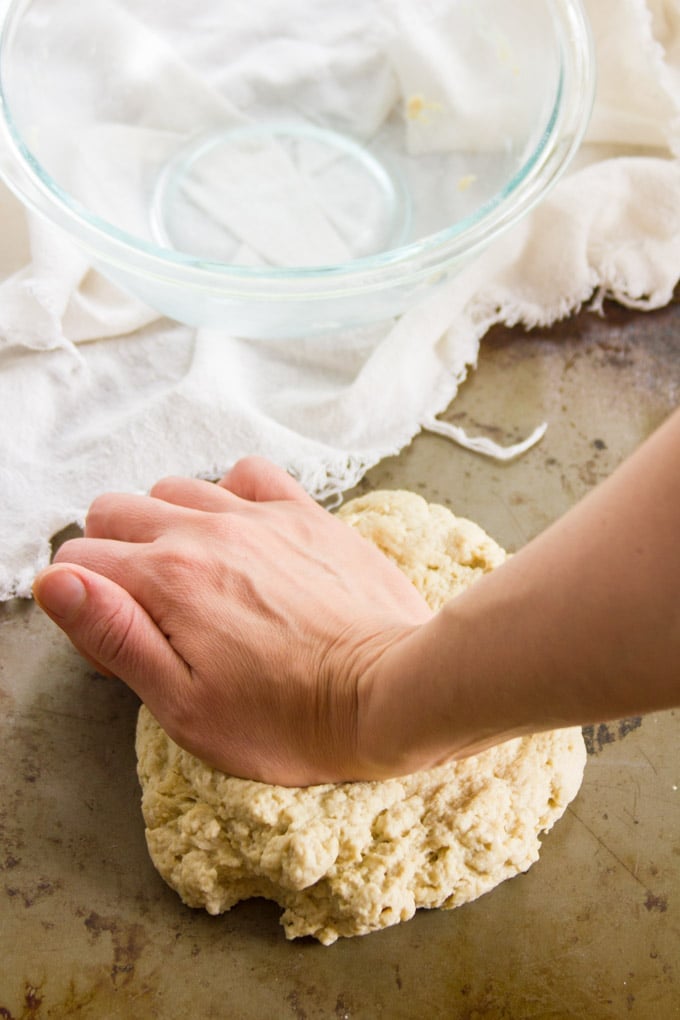 Just like with bread making, we need to knead the dough a bit, to develop strands of gluten that give seitan a meaty texture.

The broth is what gives your seitan flavor, so you want it to taste how you intend for your seitan to taste. You can do whatever you want here, and this is a great place to experiment. Feel like searching every local Asian market for a big piece of kombu? Totally fine, but if you can't find one, please don't let it stop you!

For the batch size we're going with, six cups of broth is about ideal. If you take a look at the amount of dough you've got, six cups may seem like a lot, but it's not. Your seitan will double or even triple in size while it cooks!

I usually start with low sodium vegetable broth, but water works too. You'll want a good amount of salt in there (meat is salty!), which is best provided by soy sauce, tamari, or liquid aminos. ¼ to ⅓ cup of soy sauce is my standard.

From there, it's all up to you what you add. Think savory flavors. Here are a few suggestions:

If you're not sure where to start, use the recipe below. If has three broth variations for seitan that's best suited to replace different types of meat: pork, chicken, and beef. 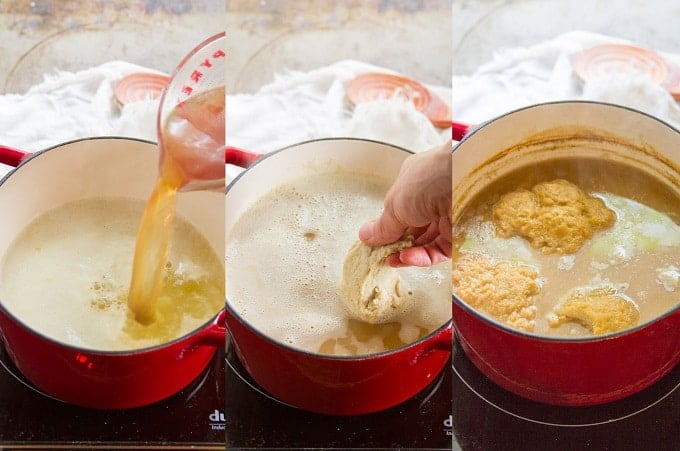 By the time your broth is done, your gluten should be sufficiently rested. Cut it into smaller pieces. I recommend cutting it into at least 4 pieces because (1) if they're too big the broth won't fully penetrate them, and (2) remember that they'll expand during cooking, and if they get too big the broth will no longer cover them.

Bring the broth to a boil. Lower the heat until it's just at a simmer, and then add the dough pieces. Set the timer for an hour and keep an eye on the pot. You don't want to let it get to a rolling boil, or your seitan might end up overcooked and chewy. I like to keep mine just barely simmering. 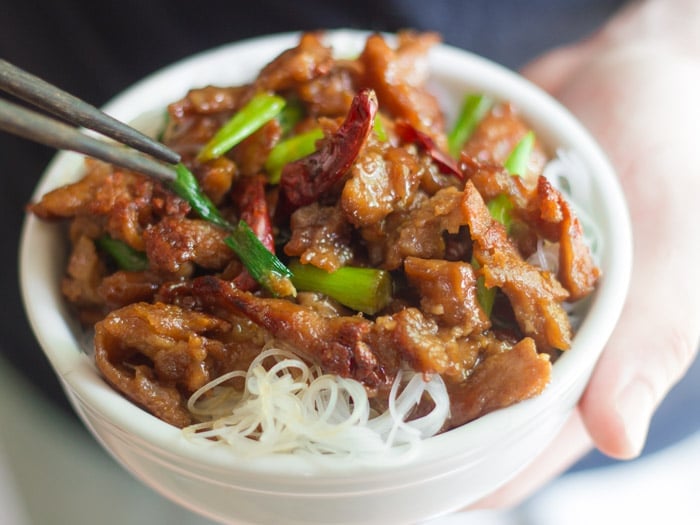 Technically, your seitan is already cooked and you can eat it straight from the pot — I often do!

Cut it into smaller pieces if you'd like, and if you aren't using it right away, store it in the broth. It'll be good for about 5 days in the fridge. If you'd like to use it more than five days out, you can seal it up and freeze it.

Now that you know how to make seitan, what should you do with it? You can use your seitan in place of meat in lots of recipes, or start with a recipe developed specifically for seitan. Here are a few to get you started: 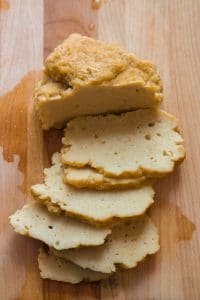 For the Broth - Pork Flavor

For the Broth - Chicken Flavor

For the Broth - Beef Flavor

The nutrition information is very approximate for this recipe, since there are three flavor variations and it's difficult to estimate just how much broth is absorbed during cooking.