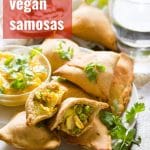 Make your own, 100% vegan samosas at home! These little dumplings are stuffed with spiced potatoes, peas, and crunchy peanuts. The best part: these suckers bake up to golden deliciousness (no frying!). 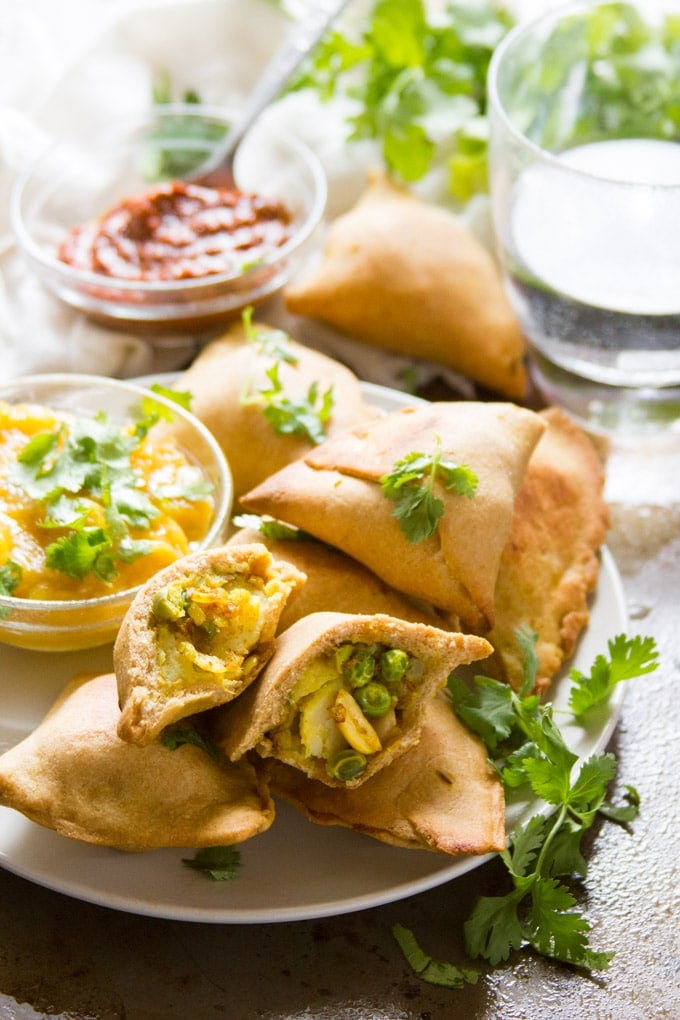 I'm usually a little reluctant to post baked versions of fried things, because they're often a disappointment. And the more delicious the original, the more reluctant I am, because the further it has to fall.

So as much as I love samosas (because they're way up there on the awesome scale), one might not expect me to create a baked version. I normally probably wouldn't even try.

But years ago I had a baked samosa that just happened to be the best samosa I ever ate. I have no idea who baked it. A friend brought it to me from a yoga class (will somebody bring some samosas to my yoga classes, please??). But it was so delicious and satisfying. I decided baking up some vegan samosas might actually be a good thing. 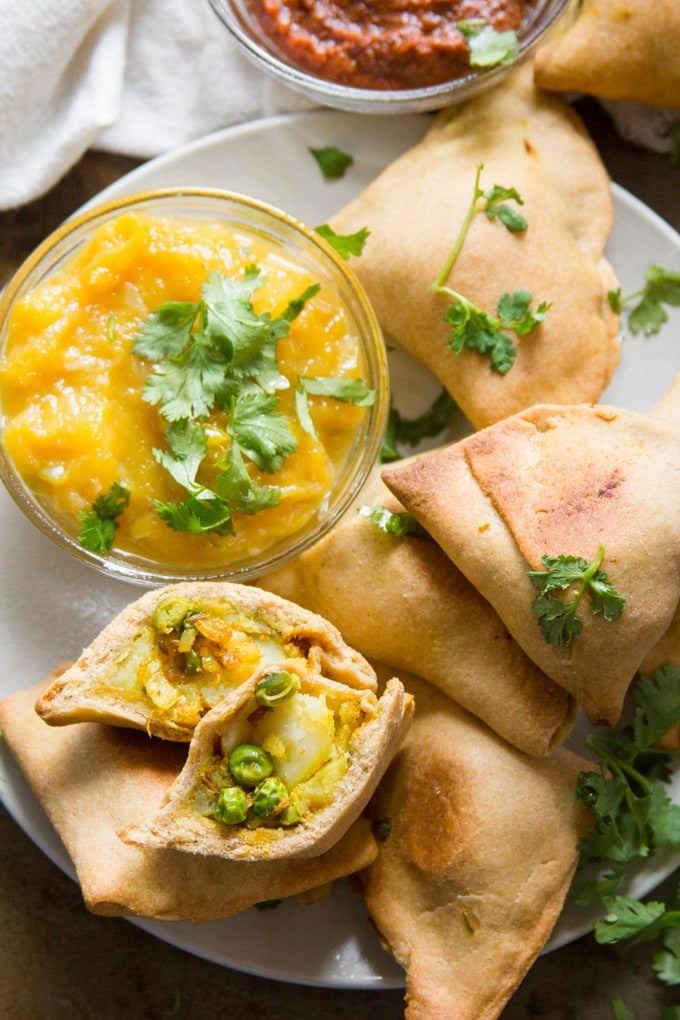 And indeed it was! I'm not going to lie and paint these as super healthy. They're potatoes wrapped in pastry. Carb wrapped in extra fatty carb. It's just not fried, so a little bit healthier and there's no fear of oil splattering involved. And of course they're vegan!

To make these baked vegan samosas, you'll start by preparing the pastry dough. It's not all that different from making a pie crust. You'll mix some flour, baking powder, oil and water, knead it a bit, and then let it rest while you make the filling.

The filling consists of a spiced and super flavorful mix of potatoes, peas and peanuts. Those awesome baked samosas I told you about had peanuts, so now I put peanuts in my samosas. Skip them if you're not into it!

Mash the filling lightly. You don't want mashed potato filled samosas, but you do want the potato pieces pretty small so they fit nicely into the wrappers. 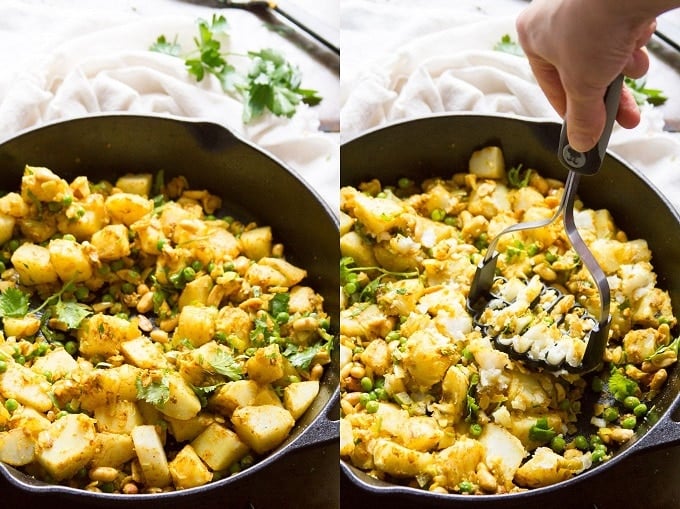 And then comes the fun part. Grab a hunk of dough and roll it into a ball, then use a rolling pin to roll the ball into a circle. Cut the circle into two half circles. Wet the edges of one of the half circles and place a dollop of filling in the center. 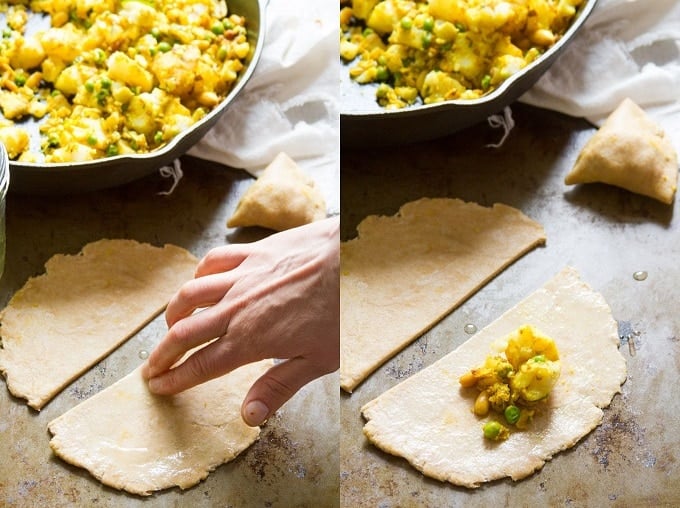 Wrap into a cone shape, seal the edges, and voila. You an honestly wrap them in any shape you like, but if you want those cute little triangle-shaped samosas you get at restaurants, this is the way to go. 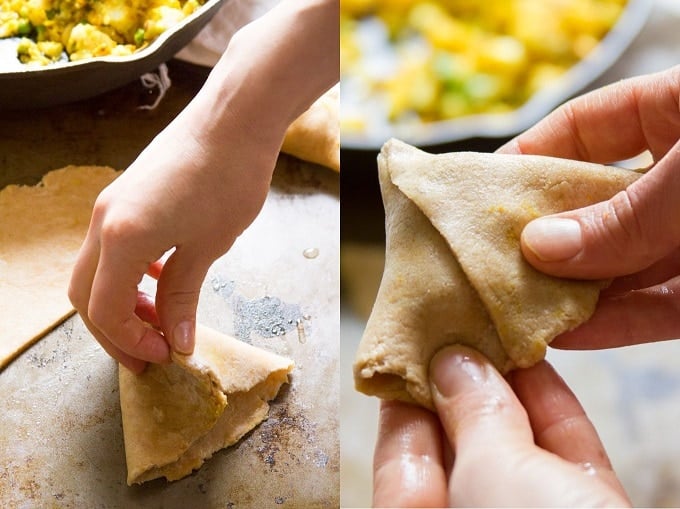 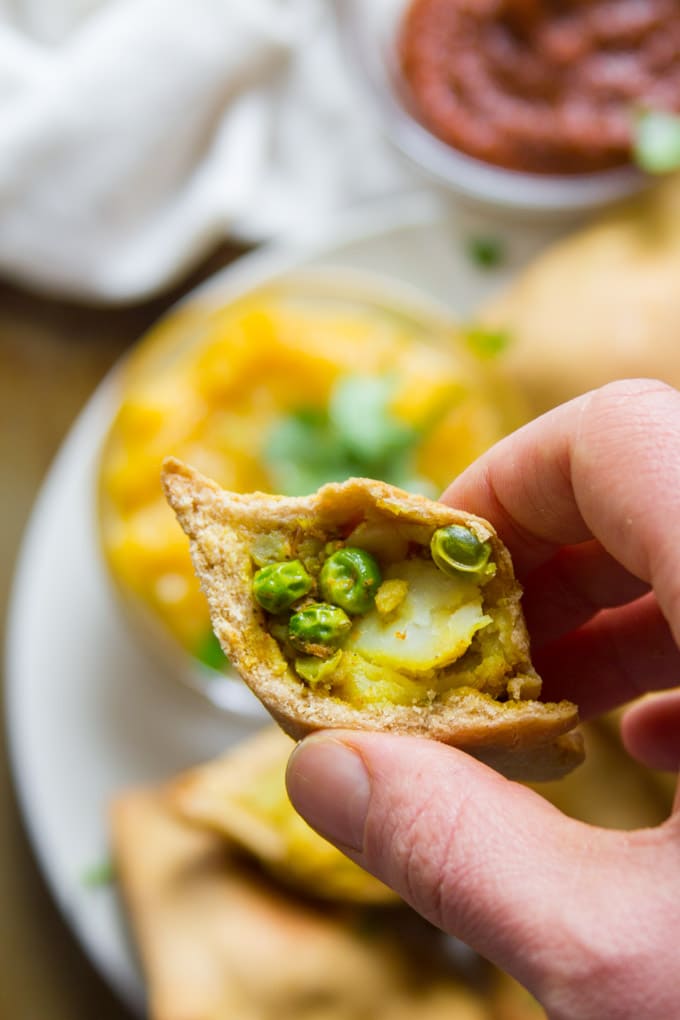 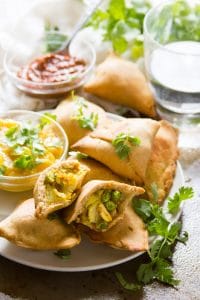 Make your own, 100% vegan samosas at home! These little dumplings are stuffed with spiced potatoes, peas, and crunchy peanuts. The best part: these suckers bake up to golden deliciousness (no frying!).

To Make the Dough

To Make the Filling

To Make the Samosas

I served this batch of samosas with some mango and garlic chutneys that I had on hand, but the cilantro mint chutney from this samosa burrito recipe would be delicious too.