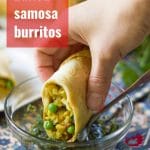 Curried cauliflower, white beans and peas are wrapped up in flour tortillas and baked to crispy perfection to make these flavor-packed vegan samosa burritos!

If this week had a theme, it would have to be repackaging old favorite dishes in new forms. Right? Today, samosas in burrito form. Monday, lasagna in soup form. Wednesday...pumpkin in cheese form? Er...maybe cheese in vegan form?

Okay, so maybe that only kind of works, but I'm sure I'll make up for it down the road! Putting a new spin on old favorites is my favorite thing. Also, it seemed like a good idea for the week after Thanksgiving, which tends to focus on more traditional foods.

Samosas have always been a favorite, but they're kind of a pain. I think. Or maybe I've never actually gotten around to making regular old samosas because they seem like a pain. My first work around was a couple of years ago when I made these samosa cakes, which were great, because it ditches the wrapper altogether, resulting in not only less pain, but less frying as well. For the longest time I've wanted to do a samosa sandwich or burrito or something like that, but the idea of stuffing potato filling into bread sounded a little carb-o-riffic, even for me. Then it occurred to me that people swap less carby things for potatoes all the time. Like cauliflower. And white beans. I stuffed my samosa burritos with both!

Cauliflower + white bean samosa burritos is a great idea in and of itself, but I took it a step further and baked them. Baking turned out to be a great way to replicate the crispy wrapper you'd normally find surrounding your samosa fillings. The result? These burritos really do taste like samosas. I loved them, and I hope you do too! 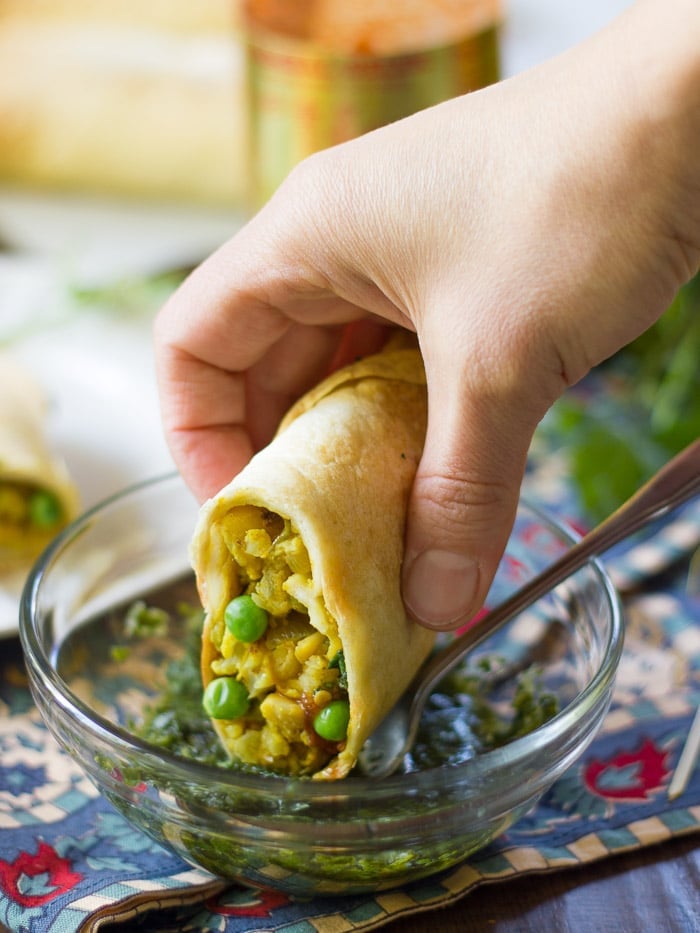 For the Baked Samosa Burritos:

For the Cilantro Mint Chutney