Crispy on the outside, moist and bursting with juicy summer corn kernels on the inside, these crave-worthy vegan corn fritters are flavored with a touch of cumin and (optionally) topped with spicy jalapeño slices!

I finally harvested the first of this year's backyard vegetable garden crop last week. Just a couple of cherry tomatoes so far. Is it just me, or is it a bit late in the season for that? My neighbors' gardens all look a bit fuller than mine at this point, so I'm guessing the answer is yes, but given the fact that my plants have all gotten pretty out of hand in years past, I'm thinking that might be a good thing.

I also took a cue from my mistakes of previous years and planted way less this time around. Things have been much more manageable, so I'm thinking that may have been a wise decision. I've got a few tomato plants (including not just the ones that I planted, but also a few that sprung up on their own), a bell pepper that's just starting to flower, a cucumber with one cucumber growing on it, and an eggplant plant that looks like it might be a lost cause at this point, as it's getting attacked pretty badly by bugs.

One thing I am a little bummed about skipping is the hot peppers. I love my hot peppers and can really never have to many of them.

I had to got to the store to snag a couple of peppers for these fritters. Actually though, you can make these with or without the jalapeño slices. I maybe should have called this post Vegan Corn Fritters (Four Ways!) but that seemed a bit overwhelming. The two ways I was talking about in the post title were baked and fried, but you could do baked with or without peppers and fried with or without peppers. That's four. Yes, I tried baking and (lightly) frying these little guys, and both ways worked!

Let's face it though, this type of recipe is totally customizable, so the ways are infinite. I debated throwing in some lime juice, bell peppers, scallions, fresh cilantro, coconut bacon. Endless possibilities, all vegan. Regular old corn fritters, I've noticed, rely heavily on eggs. I guess that's a big deal since you've got a lot of stuff to hold together without much batter. I opted to try a mix of non-dairy milk with some flax seeds. It was perfect! Just the right amount of binding, just enough richness in the cashew milk to give these fritters a soft and tender bite while staying totally vegan. 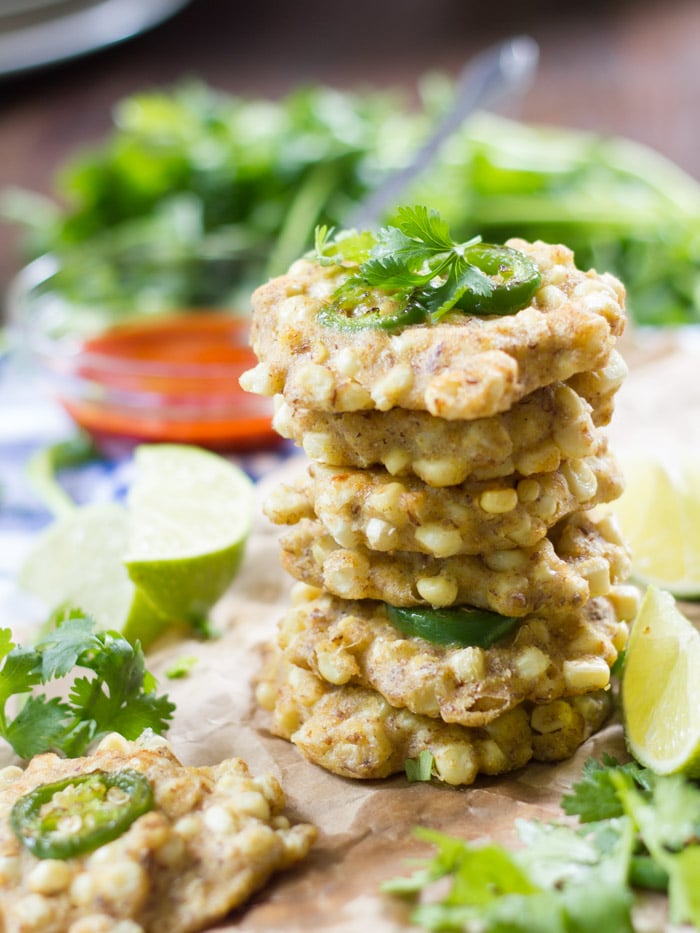 For serving (pick your favorites):

Nutrition information is for baked fritters.