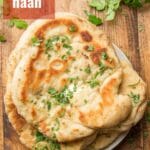 Locating vegan naan can be a challenge. That's no problem though, because it's way easy to make at home, and these buttery loaves are a million times more delicious than anything you'd find in a store!

One thing I rarely post on this site is yeast bread recipes. Why might that be? When I was a kid and just learning to cook, yeast breads were my favorite. I think at some point I decided they were a pain. Kneading takes forever, and it's a lot of work! So I abandoned the whole yeast bread thing in favor of quick breads and store-bought loaves.

Store-bought vegan naan can be tough to find. Sometimes you can get lucky and find a vegan variety at an Indian market or Trader Joe's, but quite often you're on your own. So I decided to go ahead and make some vegan naan of my very own.

A few awesome things happened. First, the kneading wasn't really that difficult. The dough is soft, and ten minutes of squishing it on the countertop, to my surprise, turned out to be a great way to relieve stress after a rough week.

In fact, the entire process of making this naan was easy. Once you've got the kneading out of the way, just roll it into loaves, and each one cooks up in a skillet in all of four minutes. No need to bake them!

Also, this stuff was way better than any store-bought naan I'd ever tried. Like, Indian restaurant delicious, and good luck at finding dairy-free naan at an Indian restaurant. Eaten right out the skillet it was OMG heaven.

I might just make homemade vegan naan all the time.

The process of making homemade vegan naan bread is actually kind of fun!

Start by warming up some of your non-dairy milk in a small bowl or liquid measuring cup. Now whisk in some sugar and a packet of yeast. Set it aside for a few minutes, until the liquid becomes frothy, which should take about 10 minutes.

While you wait for the frothing to start, grab a mixing bowl and add some more non-dairy milk to it, along with a bit of vinegar. Conventional naan is made with yogurt, but I don't always keep yogurt on hand, so I find that a mix of non-dairy milk and vinegar is a good replacement.

Tip: If you're using a higher protein milk, such as soy, it will probably curdle after you add the vinegar. This is totally fine!

Once the yeast mixture has gotten frothy you can add it to the vinegar mixture. Stir the two mixtures together in a large bowl, then stir in some oil and salt.

Next you can start adding flour, a bit at a time, until you have a dough that's just firm enough for kneading (but still pretty soft).

Turn the dough onto a floured surface and knead it for about eight minutes, until it becomes smooth and stretchy.

Roll the dough into a large ball, rub some oil on it, and place it into a large mixing bowl. Cover it with a damp tea towel, stick it in a warm spot, and let it rise for about an hour, until it doubles in size.

Tip: The amount of time it takes for your dough to double in size is temperature dependent. Dough will rise faster in a warmer environment, and slower in a cooler environment.

When the dough has finished rising, cut it into 4 equal portions. Sprinkle some flour on the counter and roll each piece of dough into a large oval.

Now it's time to cook your vegan naan!

Melt some vegan butter in a large nonstick skillet over medium high heat. Place one of your dough ovals into the skillet and cover it. Within about 2 minutes the dough should have gotten very puffy and developed some bubbles and brown spots on the bottom.

Take the cover off of the skillet and carefully flip the naan. Let it cook for about 2 minutes more on the other side.

Brush your naan with some extra vegan butter before serving it. I like to sprinkle mine with some fresh cilantro as well.

Homemade vegan naan is best served right away. But if you have leftovers, they'll keep in an airtight container at room temperature for 2 to 3 days, in the fridge for about 5 days, or in the freezer for about a month.

To reheat your naan, thaw it out (if frozen) and place it in an oven heated to 400°F for a few minutes, until warm.

Tip: The dough for this recipe is freezer friendly! After rising, lightly oil the dough and stick it in a sealed freezer bag for up to 3 months. Let it thaw and come up to room temperature before rolling and cooking.

Possibly! An all-purpose gluten-free flour blend would be your best bet if you'd like to try it, but I haven't myself, so no promises.

Can this vegan naan recipe be made with all whole wheat flour?

Can I make the dough using a stand mixer?

You can! Combine the ingredients (starting in step 2) in the bowl of your stand mixer, and use the dough hook to knead it in step 5.

What To Serve with Vegan Naan 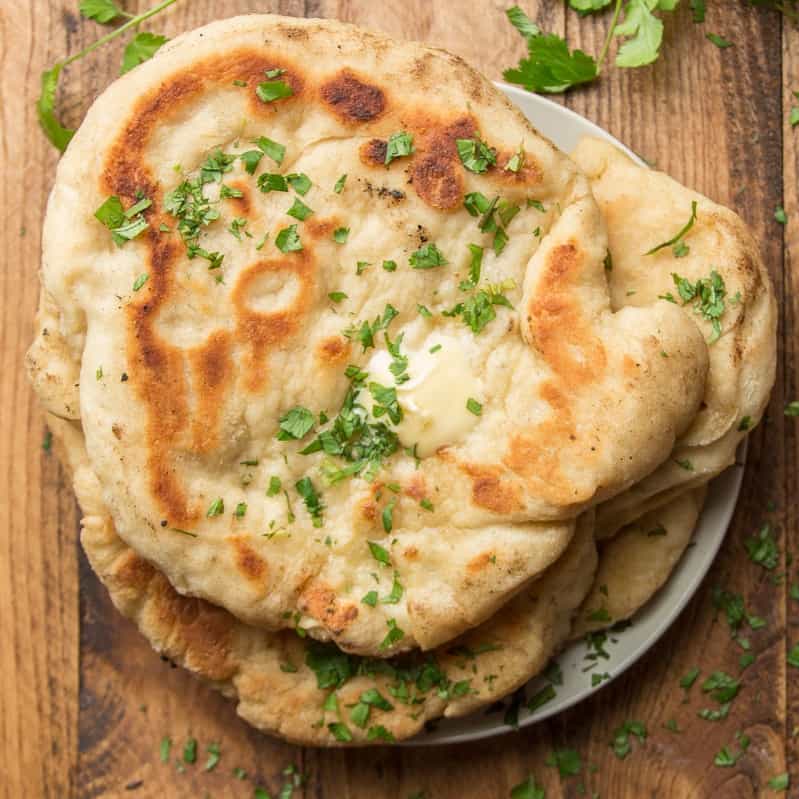 Locating vegan naan can be a challenge. That's no problem though, because it's way easy to make at home, and these buttery loaves are a million times more delicious than anything you'd find in a store!
Course Side Dish
Cuisine Indian
Prep Time 1 hour 25 minutes
Cook Time 15 minutes
Total Time 1 hour 40 minutes
Servings 4
Calories 488 kcal
Author Alissa