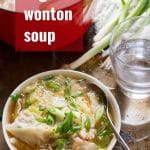 This vegan wonton soup is made with savory shiitake stuffed wontons and crispy napa cabbage in a light gingery broth.

Disclaimer: I suck really bad at wrapping wontons, and you probably do too. Nothing personal...it's just that, based on my experience wrapping wontons for this soup, I've determined that it's something most people suck at. So there's a high statistical probability you are one of those people.

I know what you're thinking: the wontons in the photo look good enough. True. Those are the five wontons I spent most of an hour agonizing over. The rest, which were the majority of the wontons that we ate for dinner, were pretty hideous.

If you want to find out just how unskilled you are at wonton wrapping, go wrap some up and put them in soup. Based on my prior wonton wrapping experiences (one and two), I thought I wasn't half bad. Soup's different though. Once they get into liquid they start inflating, unwrapping, tearing. It's not pretty.

Having said all that, I'll now tell you this: the ugly ones taste better. It's true! It's often the ugliest food that's made with the most love and therefore tastes best.

So swallow your pride and serve your family some ugly wonton soup. They'll love it, and they'll love you, even if they make fun of you a little bit for your lack of dexterity.

Where to Find Vegan Wonton Wrappers

There's usually a more popular brand that has eggs in the produce section near the tofu (why?), and that threw me off for a while. Then one day I looked in the freezer near the edamame, and lo and behold, vegan wonton wrappers.

If you still can't find them at the supermarket, try an Asian market. And you can always make your own. I've done it and it's easier than you'd think!

How to Make Vegan Wontons

I'm always tempted to go for tofu in recipes like this, but this time I went with shiitake mushrooms, because they are, for lack of a better term, meaty. Dice them up nice and fine, add in some seasoning and you've got something that isn't too far from the wonton soup you probably ordered from your favorite Chinese restaurant as a kid.

Next for the tough part: wrapping. Really, any method that keeps the fillings contained will do. But I like to orient my wrappers at an angle, place a spoonful of filling in the center, then fold the wrapper in half to make a little triangle. From there, fold the corners in to make a neat little packet.

The wontons go in your soup towards the end of cooking. Don't overcook them! And make sure to cook the soup at a low simmer to keep the wontons from being jostled too much.

For some more guidance, check out my video on how to make vegan wonton soup! 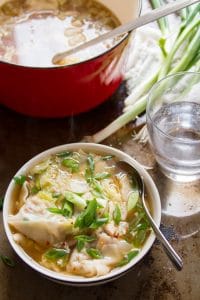 For the Wonton Soup

Make sure you read the ingredients on your wonton wrappers, as many brands contain egg.