This vegan potato soup is fully loaded with flavor and toppings, in the form of fresh chives, zesty tahini cheese, and crunchy coconut bacon.

How'd my fellow east coasters fare this weekend's snowpocalypse? I have to admit, I was a bit excited about the storm in the days leading up to it. This winter was beginning to look like a bit of a rip off as far as snow is concerned, and I was happy that some was finally on the way. Then I remembered that I really wouldn't be able to go anywhere all weekend, at least until digging my car out. I always forget what a pain that is. Then I got sick. Nothing too bad, just a cold, but between that and the storm, I took it that the universe was telling me to park it on the couch for a bit. Which is just what I did.

I got up from the couch just long enough to whip up a batch of this soup, which I promptly brought right back to the couch. (Couch potato soup anyone?) It was totally worth getting up for.

I'll say this, either my cold didn't affect my appetite at all, or this stuff was really good. (Probably both. If my appetite goes, things are really bad.) The soup itself is good, but it's really just a basic vegan potato soup. What really makes this recipe special is the toppings. I've done these toppings before, but for whatever reason it never occurred to me to throw them onto some loaded potato soup. I'm so glad it did though. I never thought I'd be spending a weekend on the sofa with a bowl of cheesy bacon topped potato soup, but it was awesome. 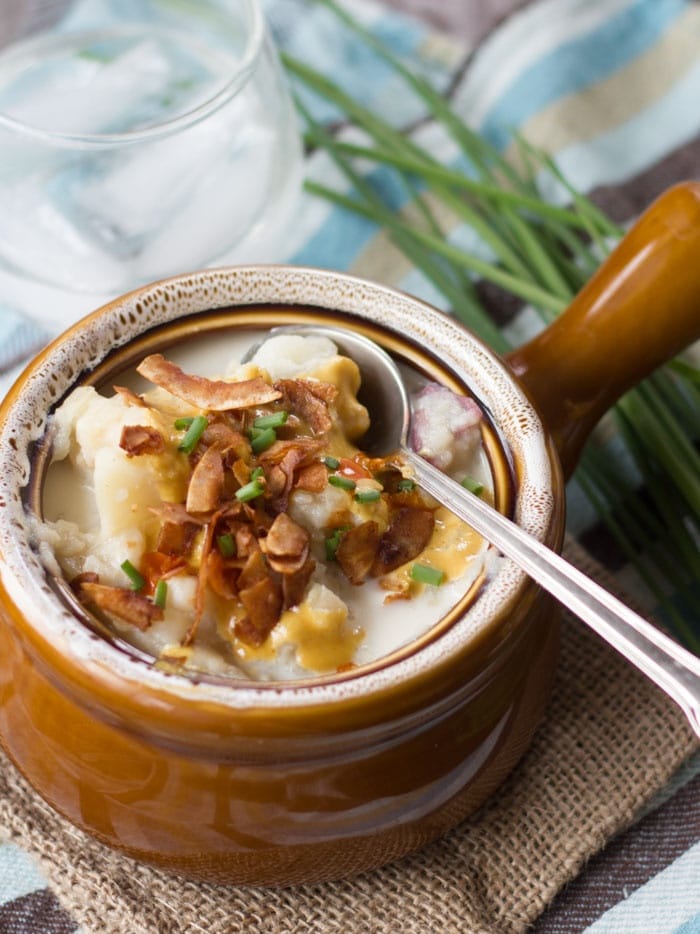 For the Vegan Potato Soup

For the Tahini Cheese

This soup thickens up quite a bit as it sits. If you have leftovers, they'll probably look more like mashed potatoes than soup. Add a bit of milk or vegetable broth to re-soupify them.

Nutrition information does not include coconut bacon. You can find the nutritional information for that here.