×
You are here: Home / Dessert / The Most Amazing Vegan Brownies 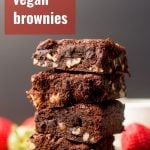 These rich and chocolaty vegan brownies are easy to make and perfect for satisfying your chocolate cravings!

Sometimes you just need a brownie! And while there are lots of ways to dress up a brownie (like with pumpkin or mint and almond butter), more often than not I find myself craving a simple, classic, chocolaty vegan brownie.

When I was growing up we always had a box of brownie mix in the pantry to satisfy such cravings. Unfortunately, those mixes weren't vegan, and while I'm sure there are vegan brownie mixes out there, my neighborhood supermarket doesn't have them.

Tip: Even brownie mixes that may appear vegan by the ingredients lists might not be. Watch out for the sugar! In the United States most granulated sugar (unless it's organic) is processed using animal bones.

Ever notice how boxed brownie mixes have directions for fudgy brownies as well as cake-like brownies? I never knew which one to pick. These vegan brownies are somewhere in between — you get the best of both worlds!

While they're intense and rich and full of chocolate flavor, they're not overly dense (as I find many fudgy brownies to be), and they're not so light as to be considered cake-like.

That happy in-between texture is where you find the best vegan brownies as far as I'm concerned!

Tip: Do you prefer brownies that are definitively fudgy or cake-like? My suggestion would be to adjust the amount of baking power. Use a bit extra baking powder to get cake-like brownies, or leave it out completely for fudgy brownies.

How to Make Vegan Brownies

Melt your chocolate chips before getting started. I find the easiest way to do this is to microwave them in a bowl in 30 second increments, stirring a bit between each zap.

1. Grab an electric mixer. The first thing we're going to do is beat the sugars together with the vegan butter and vanilla. Do this for a full two minutes and be sure to scrape down the sides of the bowl with a spatula. This is going to introduce some air into the batter, so our brownies have a nice crumb to them. It also helps to achieve those beautiful shiny tops!

2. Next you'll stir in those melted chocolate chips. Mix them in completely, and then add some non-dairy milk (make sure it's at room temperature).

3. Once the mixture is relatively uniform you can add your dry ingredients to your wet ingredients. Start with the flour and sprinkle everything else on top: cocoa powder, cinnamon (totally optional but wonderful), salt, and a bit of baking powder.

4. Stir everything just until mixed. The brownie batter will be very thick at this stage — almost like cookie dough.

5. Optional step: stir in some nuts. Walnuts and pecans are great in these brownies.

6. Transfer the mixture to a parchment paper-linked baking dish and bake the brownies until they just start to pull away from the edges of the pan.

A toothpick inserted into the center should come out almost (but not totally) clean. The brownies probably won't look done in the middle at this point. But don't worry! They'll continue to set after you take them out of the oven.

Tip: Be careful not to overcook the brownies! This is really easy to do. Take them out of the oven as soon as they pull away from the pan, even if it's just a tiny bit.

Let your vegan chocolate brownies cool before slicing them.

Store any leftover brownies in an airtight container or bag for up to 4 days at room temperature or in the freezer for up to 3 months.

Can these brownies be made gluten-free?

I'm honestly not sure! I haven't tested any gluten-free versions of the recipe, but I suspect you could use an all-purpose gluten-free flour blend.

Is there a substitute for the nuts in this recipe?

Feel free to replace them with something else. Try some vegan chocolate chips or marshmallows, or swirl a few spoonfuls of peanut butter into the batter.

Shouldn't this recipe include an egg-substitute?

Nope! While I'm all about baking with vegan egg substitutes, I don't find any particular ingredient necessary for egg-free brownies. They're pretty dense, so something like a flax egg wouldn't have much effect, and the flour does a fine job of binding them together. 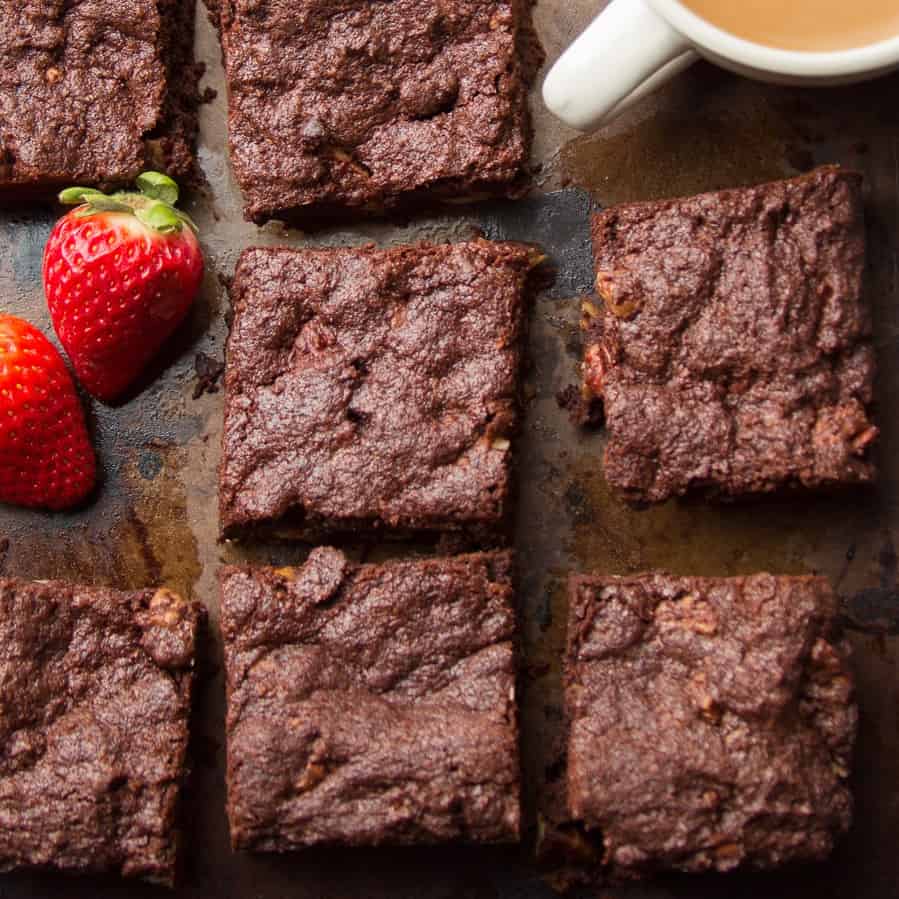 The Most Amazing Vegan Brownies

These rich and chocolaty vegan brownies are easy to make and perfect for satisfying your chocolate cravings!