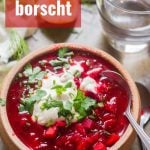 This cozy vegan borscht is made with vibrant beets, hearty veggies and flavored with zippy lemon juice and dill.

Funny story: for the longest time I assumed borscht was gross, even though I had absolutely zero logical basis for thinking that.

Back when I waited tables it was the soup of the day one day, but I'd never heard of it before. Some of the other servers explained that it was beet soup, so it must be terrible. I think there was even a gagging noise and finger-down-the-throat gesture involved. I guess that had an impression on me, because for most of my adult life I steered clear of borscht.

Well that was kind of ridiculous. I mean, first of all, I LOVE beets. Love, love, love them. But I guess I assumed they were bad in soup because someone else said so. Second of all, a lot of people make assumptions about the food I eat being unappetizing just because it's vegan. How many millions of times have people scrunched their faces up in disgust over tofu or miso or Brussels sprouts. All of which is I happen to love.

It wasn't until recently that I realized I'd been pretty silly all those years making a unconscious assumption based on what other people told me. I decided it was time to whip up a batch of vegan borscht and see what I thought.

The verdict: borscht is the best thing ever. You know, along with tofu and miso and Brussels sprouts and all that other good stuff.

If you love cozy soups and you're a fan of beets, it's a safe bet that you'll dig this.

My vegan borscht is made with not only beets, but also cabbage, carrots and potatoes. It's super hearty. The beets infuse everything with their slightly sweet, earthy flavor, and the soup gets finished with some zippy lemon and dill. I topped my bowl with a scoop of unflavored non-dairy yogurt, but vegan sour cream or cashew cream would be excellent too. Serve it with some crusty bread for dipping and you'll be in winter comfort food heaven. 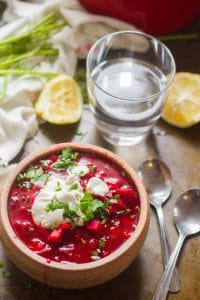 This cozy vegan borscht is made with vibrant beets, hearty veggies and flavored with zippy lemon juice and dill.