Sometimes I come up with an idea like this and I'm torn as to where to take it. On the one hand, plain old creamy vegan spinach pasta is great! It doesn't need any special treatment. But on the other hand, I can season it up with dill and scallions and call it spanakopita pasta and it's immediately more fun. And delicious! I love dill and scallions, but then again, not everyone does — especially dill. I've known some serious dill haters in my time!

So I'll leave it at this: if you're into the spanakopita pasta thing, go on and include the dill and scallions. If not, skip them! The dill and scallions were the last thing I added to this dish and I tasted before and after, so I can confirm that it's delicious both ways.

I shared it with my husband for dinner and while he was all about the dill and scallions, he looked at me a little funny when I told him about the spanakopita pasta concept. So maybe I should've just left that out of the title. Too late!

So, whatever you call this, here's how it works: whip up a creamy cashew sauce in the blender while you cook your pasta, then simmer up some spinach, stir in the pasta and super thick sauce and voila, you've got a perfectly creamy vegan spinach pasta ready to devour. I used fusilli pasta because guess what? Fusilli is my favorite pasta of all time and I don't believe I have a single fusilli recipe on this site. I feel like fusilli generally doesn't get enough love — my supermarket had at least eight brands of spaghetti and one of fusilli, that I had to dig for because it was buried behind all the more popular pastas. Use whatever your favorite pasta shape is though. You could even turn this into a mean plate of vegan spinach (or spanakopita) fettuccine Alfredo. 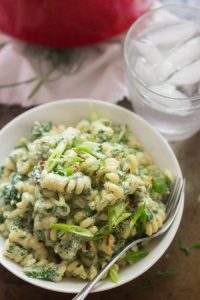