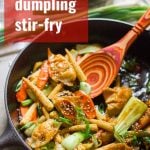 Remember how I told you I did something really awesome with Wednesday's dumplings? Well, guys...I put 'em in a stir-fry! I guess you probably figured that out by the title of this post. ;)

You probably also figured out that I'm reeeeeeealllly excited about this idea.

Last week at some point my husband and I were watching an episode of the Gilmore Girls after dinner. The show is new to me, but my husband really liked it and suggested we catch up so we can watch the new episodes. One thing that got my attention about the show is the amount of food involved. They're all about food, and even though none of the food seems to be vegan or my kind of thing, I can still draw some inspiration from it.

Anyway, dumplings appeared at some point in the episode we were watching. I can't remember if the looked fake or not, but they must have slipped into my subconscious, because later on in the evening I randomly blurted out "I need to put dumplings in a stir-fry." Thanks Gilmore Girls, because this was the best idea ever that I can't believe I never thought of until now. I mean, think about it, if you're eating dumplings you'll be dipping them in sauce anyway, so why not just drench them in sauce?

That's just what I did, and my dumpling stir-fry was excellent! It was a bit more work than the normal stir-fry because of the whole making the dumplings thing and all. If you can find some vegan dumpling at the store, go ahead and use them instead (I've seem them and wish I could remember a few brands, but I can't). 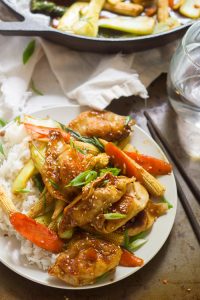