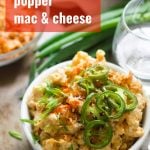 A few months after going vegetarian my husband accidentally ate some meat. A well-meaning coworker offered him a jalapeño popper. It had bacon in it. Oops.

I'd never heard of bacon being an ingredient in jalapeño poppers, but I guess when you've spent the majority of your life as a non-bacon eater, you miss a few things. My husband requested I come up with some kind of vegan jalapeño popper-themed recipe featuring bacon so that his little accident wasn't all in vain. I'd already done a recipe for regular old vegan poppers, so I had to come up with something new. Popper mac it was.

Some good did come out of the bacon popper incident, because vegan jalapeño popper mac is the best thing ever. Pasta, spicy cheese, crispy breadcrumbs, coconut bacon, and of course, jalapeño slices all add up to magic.

The recipe is a little involved for mac and cheese. To a certain extent that's unavoidable when you're making vegan mac & cheese, because you've got to make the cheese out of something. For this particular recipe I went with a cheesy vegan sauce made from cashews, cauliflower and carrots. In the past I've used just cashews, but I actually like it better with the veggies. They add some body to the sauce and just a bit of savory flavor. Miso gives the sauce even more savory flavor, and hot sauce and nooch add up to lots of cheezy goodness.

But this recipe has a bunch more elements and steps, so I'll say this: if you really don't feel like dealing with making coconut bacon, roasting jalapeño peppers, and broiling the panko topping, then don't! Even if you skip all that, just the pasta and sauce alone would make an awesome spicy vegan mac and cheese. 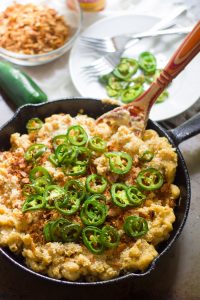 For the Cheese Sauce

If you're making the coconut bacon at the same time as the mac and cheese, you can stick it in the oven right with the jalapeño slices—it cooks at the same oven temp!