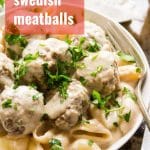 But in the end I just couldn't. All that rolling. And would you guys even be into a book just about vegan meatballs? And could I even come up with that many meatball recipes?

Well, in hindsight, I think the answer to at least that last question is a resounding "yes."

I'm not sure if I just had more meatball recipes in me than I thought, or if my discussions with those guys infected me with the meatball bug, but I've been rolling them out ever since. (<-- Yup. Pun intended.)

You all actually seem to respond really well to any recipe involving meatballs I post on this site, so I've got no plans of letting up.

It's time for some more vegan meatballs, Ikea style.

I've never actually had those Swedish meatballs they serve at Ikea. I'm pretty sure I went vegetarian before any Ikeas were built in my vicinity. But I get what they're all about and I think I hit it with this recipe. And even if I didn't, they're really, really tasty!

I mentioned recently that I'm trying to switch up the dairy substitutes and rely less on cashews, because I know I've got a bunch of readers out there with allergies. Coconut milk has quickly become my favorite alternative. It sounds weird, but it's absolutely delicious in the cream sauce for this one. If you hate coconut and would rather go with something cashew-based, try the sauce I used for my stroganoff.

The main ingredient in the meatballs themselves is mushrooms. They're great for adding savory flavor and meaty texture. I'm also trying to give my mushroom haters alternatives, so if you're one of those folk, try using the chickpea based meatball portion of my Salisbury steak meatball recipe. 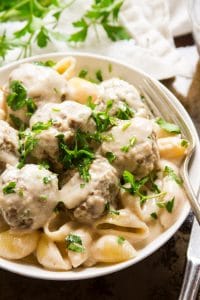