Let me just say that I completely recognize how ridiculous this pizza is.

It's a bit of work for a pizza. And then it's got the whole carb on carb thing going on. So do we really need such a thing as a vegan baked potato pizza in our lives?

That was the final verdict after I actually sat down and ate a slice for dinner. My husband started digging into his slice before I even got to mine and his reaction tipped me off that maybe the whole super-carb pizza thing might just be worth it.

Guys, it was really, really good.

And the Super Bowl just happens to be a perfect occasion for indulging in not only pizza, not only Buffalo sauce, but way carbed out pizza with Buffalo sauce.

Let's talk about how this one is put together!

Instead of cheese or sour cream like you might find in a non-vegan baked potato pizza, I whipped up a batch of super simple cashew cream. Then I split it up. Most of the batch gets seasoned with Buffalo sauce and slathered on top of the crust. The rest is mixed with chives and parsley to make a dairy free ranch, which goes on top of everything.

In between there are chunks of baked potato and smoky tempeh bacon. With so many options for vegan bacon I was a little torn. You can absolutely make your favorite if you're not into tempeh (coconut bacon would be great), but I really love the texture the tempeh added.

The pizza is finished off with some scallions, and then of course we poured on the extra hot sauce as we ate it. 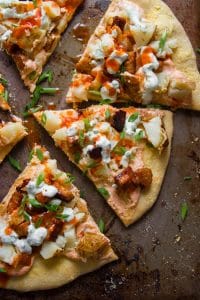 For the Cashew Ranch/Buffalo Sauce

You can save time by microwaving the potato.