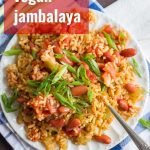 This easy vegan jambalaya is made with a spicy mixture of brown rice, red beans and bell peppers. It cooks up quick and easy on the stove, or you can let it simmer away in the slow cooker! 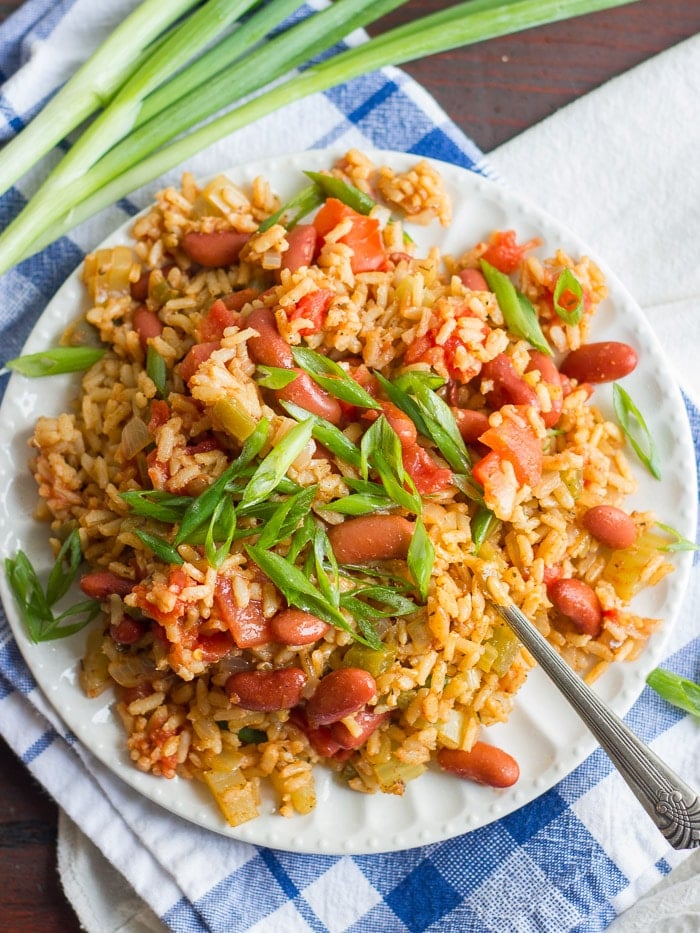 When I was in law school, I had a friend from New Orleans who would go out every year and buy a traditional Mardi Gras cake that had a little plastic baby baked right into it. He would invite a few friends over to his apartment on Fat Tuesday for a low-key lunchtime celebration. I forget the details of the tradition, but whoever got the slice of cake containing the baby was somehow special or blessed. I never got the baby, but was always happy for the chance to enjoy some celebratory cake. 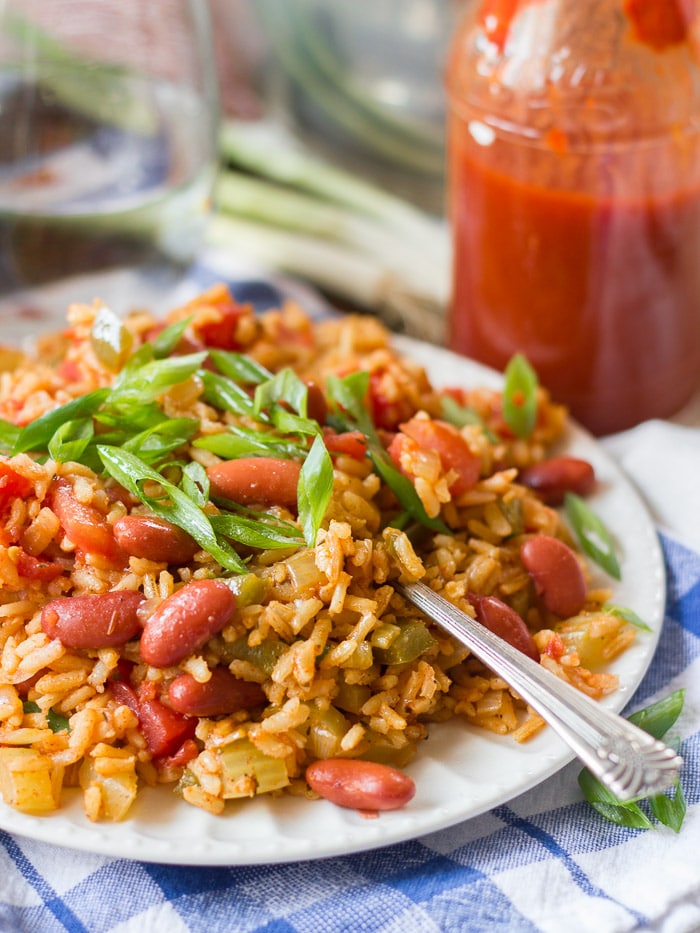 So, of course my first thought for posting a Mardi Gras recipe was to recreate that cake, but the thought of baking plastic toys into my food freaks me out a bit.

I was also hoping to avoid the "fat" part of Fat Tuesday, especially since I didn't have any Mardi Gras celebration plans myself, and I usually reserve my dessert posts for those occasions when I have some dinner company to feed the results to. Maybe in some future year I'll plan a celebration so I can share some home-baked fatness with you all.

Last week's sausage recipe would be the inspiration for jambalaya as my Mardi Gras post. Once I had the idea for the sausage, the jambalaya seemed like the obvious next step.

I have to admit here that traditional jambalaya is something I've never had, though it apparently involves shrimp and sausage. I'd already covered sausage by the time I came up with the idea, and upon some further consideration, red beans seemed like a great substitute for shrimp.

You don't have to make your own sausage for this. The homemade variety is nice, but if you're not up for that much work you can use your favorite commercial vegan sausage. Personally, I'm a big fan of Field Roast.

The slow cooker aspect of this recipe makes it nice for a couple of reasons. First, and this is something I often forget due to not busting out the slow cooker often enough, the all day simmering of Cajun spices will give you a whole day of comforting, appetizing aromas in your home. Second, the slow cooker is great if you're serving this as party food — be it Mardi Gras party food or something else. The initial four hour cook time is approximate, so you can let it simmer away as you party and just throw the rice in about an hour and a half before dining time.

This post originally published on Connoisseurus Veg on March 3, 2014. Updated on December 23, 2016 to include stove top cooking method.

This easy vegan jambalaya is made with a spicy mixture of brown rice, red beans and bell peppers. It cooks up quick and easy on the stove, or you can let it simmer away in the slow cooker!
Course Entree
Cuisine Cajun
Keyword Beans, rice
Prep Time 10 minutes
Cook Time 6 hours
Total Time 6 hours 10 minutes
Servings 6 -8
Calories 383 kcal
Author Alissa

Nutrition information does not include vegan sausage, since there's so much variation among brands.