Rich stout beer is the key to creating an intensely flavorful, and totally delicious batch of vegan Irish stew! Top it all off with some fluffy herbed dumplings and you're in vegan comfort food heaven.

Happy Pi Day! This recipe was supposed to be a pie, and as you can see, it is not. For a while there I thought I'd start a new tradition and post an Irish themed pie every year to hit both Saint Patrick's Day and Pi Day. I did manage to do that back in 2016. But then last year I posted a very not Irish pizza. And this year I failed at making my Irish recipe into a pie. Ah well.

So yeah, initially I thought a vegan Irish stew pot pie would be the thing. But as much as I love a good savory pie, they're a ton of work. Who has time for that when pie day falls in the middle of the week. And dumplings are just as tasty as pie crust, in my humble opinion. So Irish stew with dumplings it is!

What makes this stew Irish, you ask? Well, first off, it's totally not authentic. It's a bit like my vegan beef stew, and if you enjoyed that I think you'll dig this too. But it's the addition of some Irish stout, cabbage, and savory dumplings that make this stew totally inauthentically Irish. And totally delicious.

The stew starts with some mushrooms. They're hearty, savory, and the perfect replacement for meat that you'd find in traditional Irish stew.

Add some carrots, onions, celery, and sauté everything for a bit until it begins to soften.

Stout is the key ingredient that makes the stew super savory. Add that, along with some cabbage, potatoes and seasonings, and let it simmer for a bit.

While the stew simmers, you can mix up the dumpling dough. Drop spoonfuls into the stew, cover, and let it cook a little longer until the veggies are super tender and the dumplings are soft and fluffy. 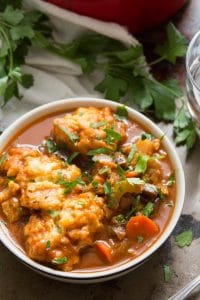 Rich stout beer is the key to creating an intensely flavorful, and totally delicious batch of vegan Irish stew! Top it all off with some fluffy herbed dumplings and you're in vegan comfort food heaven.