These vegan cucumber mint sandwiches are made with toast slathered in creamy cashew cream cheese and stuffed with cucumber slices, fresh mint and scallions.

Let's talk about this vegetable garden. I think I've gotten in a bit over my head.

After an evening of thunderstorms earlier this week, I awoke to find that my enormous tomato plants collapsed on top of my itty-bitty pepper plants. I planted them right next to each other. Who knew they wouldn't end up the same size? The seedlings were pretty darn close. Oh, and also, apparently tomato cages are not one size fits all. I'm just learning this.

The same thing pretty much happened with my zucchini and green beans. Zucchini dominates. Beans are squashed.

Then there's the plant that seems to want to dominate everything. That would be cucumber. I swear, if I plant any cucumber next year, it is going on the other side of the yard, far, far away from everything else. Maybe down the street somewhere. I'll have to scope things out. It climbs and grabs and draws all the other plants into submission. And by "it," I mean they, because I planted two, which I recently discovered was totally unnecessary after harvesting eleven giganto cucumbers in one weekend. Eleven!

Initially, I tried making pickles, and, well, injured myself in multiple ways. Instead of going with refrigerator pickles, I thought I'd get fancy and try some canning. This would be my first attempt at canning, which resulted in me first burning myself after plunking a mason jar into my boiling water bath, and later cutting myself badly after attempting to retrieve the broken mason jar. My boyfriend keeps telling me it's time to do a post on mindful cooking. He might be right.

So, am I the big, resentful cucumber hater now? No. It's not their fault. Also, this sandwich helped get cucumbers back in my good graces.

I didn't really expect these to be as good as they were, and I'm wondering if you're reading and thinking the same thing. These were really freaking good! What started as an excuse to use up my cucumbers and a partial batch of cashew cream cheese, turned out to be one of my new favorites. We ate these two nights in a row. I'm even starting to think I might plant cucumbers again next year. Proof enough for you? Try them! 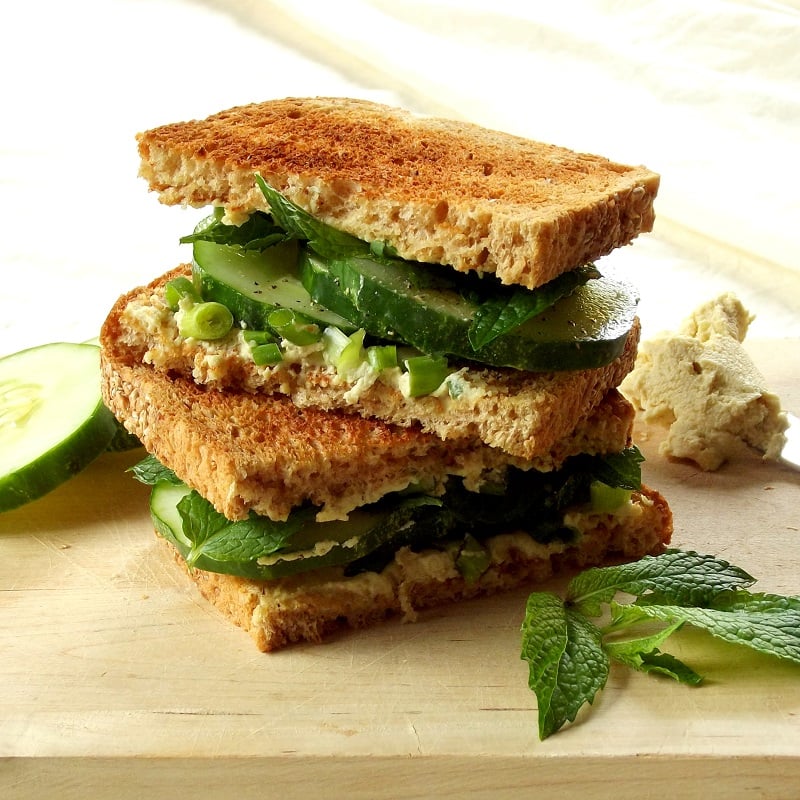 These vegan cucumber mint sandwiches are made with toast slathered in creamy cashew cream cheese and stuffed with cucumber slices, fresh mint and scallions.