Apparently embarrassing myself once with the world's stupidest pun of all time wasn't enough for me. So here we are, nearly three years later. Another day, another veggie, another nacho cheese, and another super cheesy post title.

But to be fair, I needed something really cheesy to be worthy of this one.

And I can't promise I won't do it again. There are so many things you can turn into nacho cheese, and I feel like I'm just starting to explore. It would be a big disappointment to give any of my vegan nacho cheeses a boring name.

The ingredients to this one might look a bit familiar. When I posted my Jalapeño popper mac not too long ago I found myself licking the inside of the food processor bowl and wishing I had some chips for dipping. That's always a sign of recipe success, and generally also an indication that I should be putting the basic formula to other uses. Cauliflower nacho cheese it was!

It's not just cauliflower in this one: carrots give this nacho cheese some authentic looking orange color, and cashews add richness. (That's Nacho Cauliflower Carrot Cashew Cheese is a little cumbersome of a title though!) And when you blend all those things up with some seasonings and non-dairy milk, you get something that's pretty darn cheesy and addictive when used for dipping chips. My hand model even gave me a hard time, asking repeatedly when he could eat the chip that he was modeling. It's hard to find good help sometimes.

In addition to making great dip material, this vegan cheese would be awesome mixed up with some elbow macaroni or drizzled on sandwiches like my vegan Philly cheesesteaks or spicy broccoli rabe sandwiches. 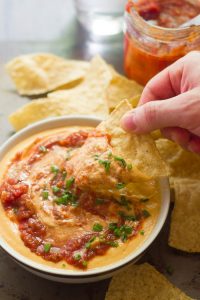