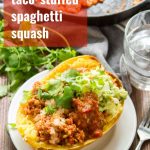 Tender roasted spaghetti squash halves are filled with spiced lentils, juicy tomatoes and creamy guac to make these scrumptious taco stuffed spaghetti squash boats. They just happen to be pretty healthy, but taste like a taco party in your face! 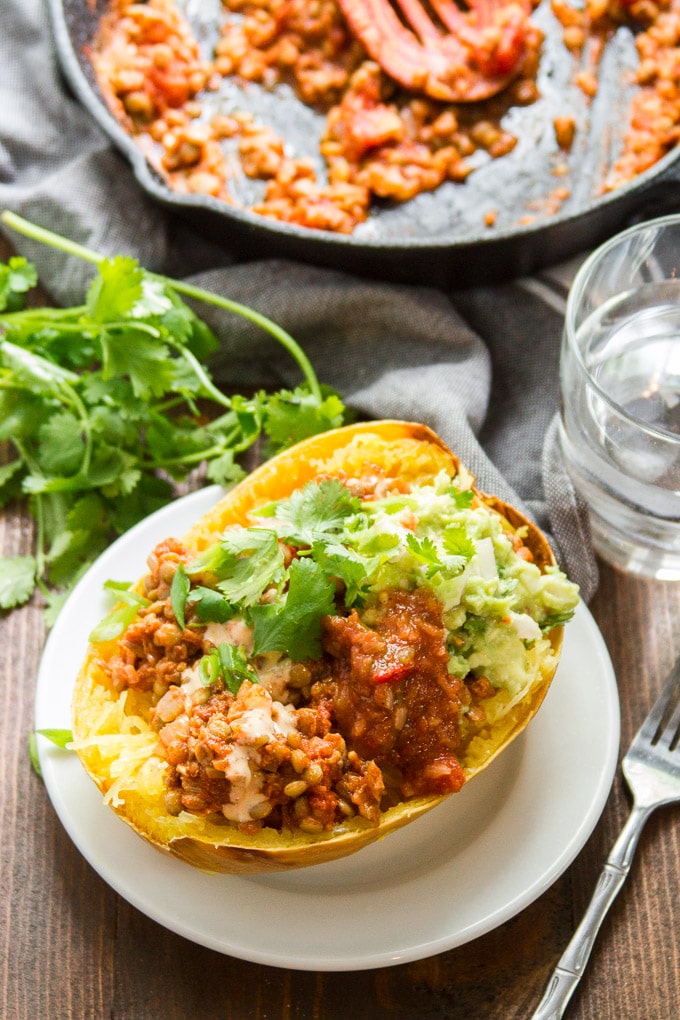 Spaghetti squash kind of has a reputation as diet food, which is a shame. Even though I try to eat reasonably, I'm not into diet food, and I've even been known to indulge and fry things from time to time.

When I see something labeled as "light" I'm immediately less interested in eating it. So it's kind of a shame that spaghetti squash incidentally picked up that label in most of our brains.

I happen to love spaghetti squash because it's fun! Veggies that turn into noodles are fun. Foods that make their own container and get to be called "boats" are fun. The fact that spaghetti squash just happens to resemble spaghetti at way less calories is an incidental benefit as far as I'm concerned. 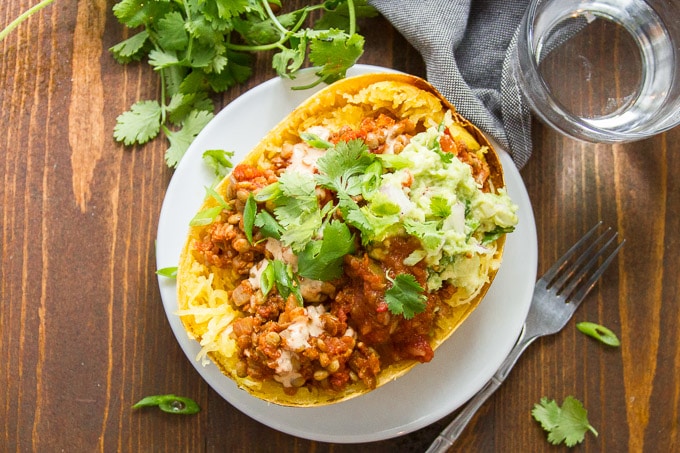 Get ready for a spaghetti squash taco party in your mouth.

There are a few different ways to roast spaghetti squash for stuffing, and in the past I went with what I now recognize as the inferior method of cutting and then roasting. This time around I didn't feel like dealing with the process of cutting a (rock hard) raw squash, so I tried roasting the squash first, and it was so much easier!

Grab your squash and poke some holes in it with a sharp knife. The knife needs to be sharp! A paring knife works great. Roast it for a little over an hour, let it cool and cut. The only drawback to this method is that it can take a while to cool. My trick was to slice half of it once it was cool enough to handle, then let it sit for a few minutes before cutting the other half. The cut accelerates the cooling process.

Once it's sliced, scoop out the seeds, then use a fork to rake out the inner flesh. This is how you get your squash to have a nice noodley texture. 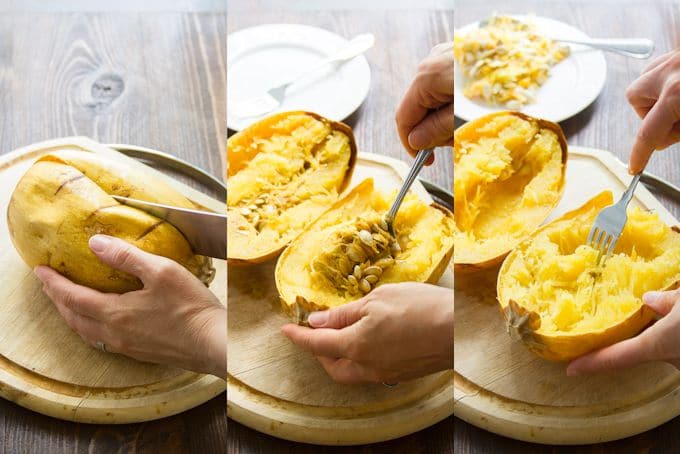 While the squash cools you can make your filling. Sauté some onion and garlic, then add cooked lentils, tomatoes and spices. Let everything simmer for just a few minutes to get the flavors to mingle. 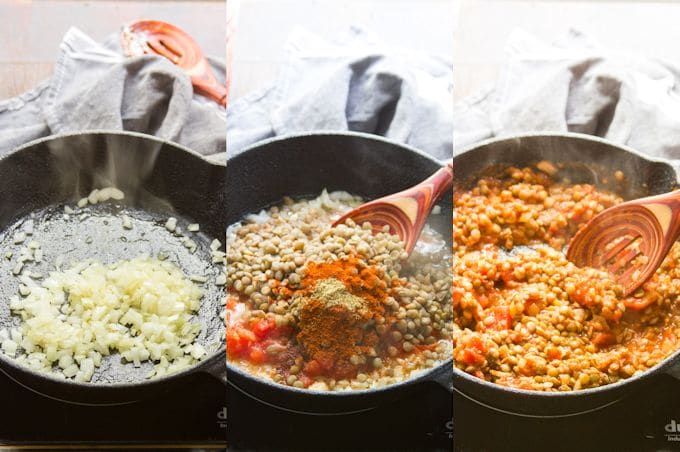 Stuff your squash with the lentil mixture, then top with guac, vegan nacho cheese, or anything else you like. You can even scoop out the filling with some chips! 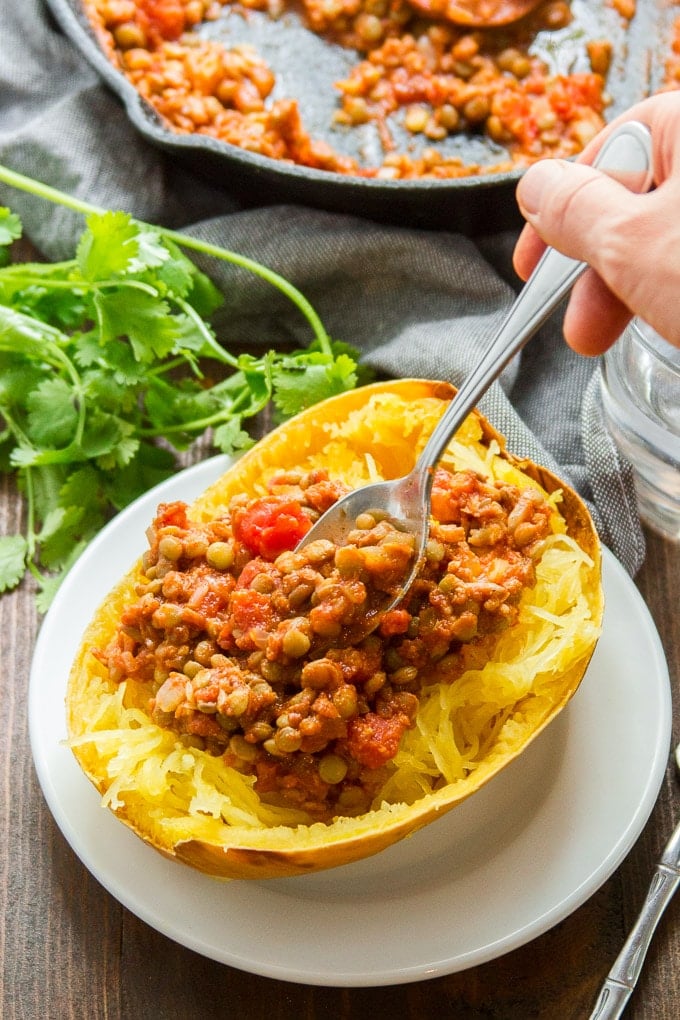 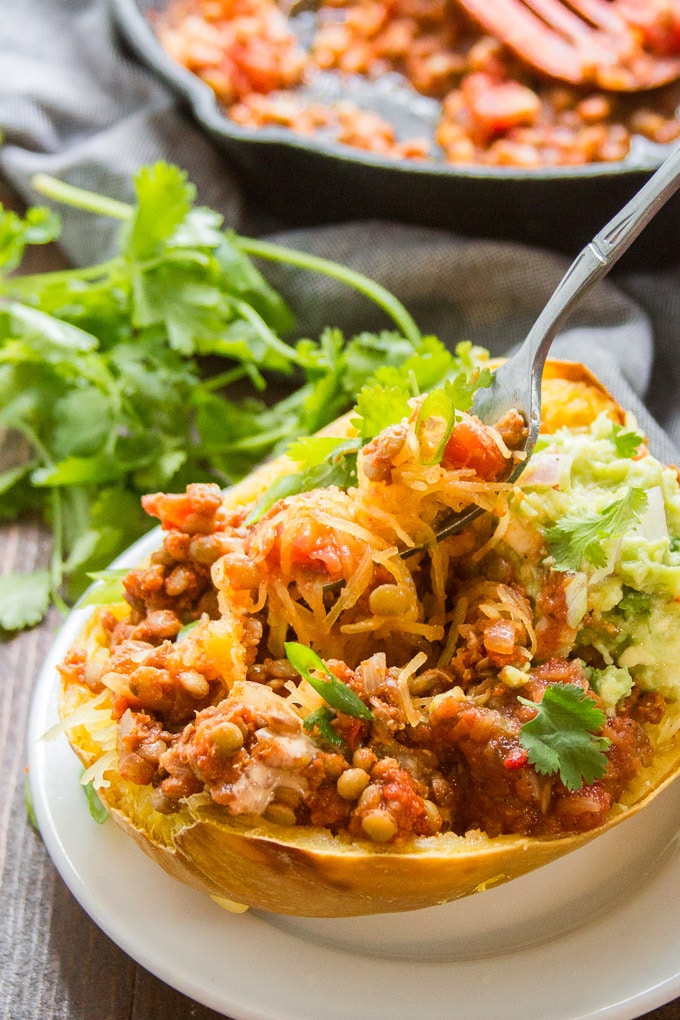 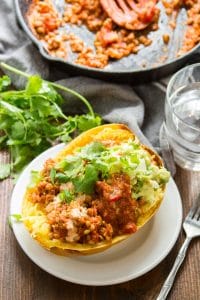 Tender roasted spaghetti squash halves are filled with spiced lentils, juicy tomatoes and creamy guac to make these scrumptious taco stuffed spaghetti squash boats. They just happen to be pretty healthy, but taste like a taco party in your face!

To Make the Guacamole

To Make the Stuffed Spaghetti Squash

Nutrition information includes squash, lentil filling and guacamole. It does not include other toppings.